12-team mixed leagues (must be available in at least 50 percent of ESPN, Yahoo, or CBS leagues)

We were all deluded into thinking that the Athletics would eventually turn the keystone over to the plethora of young infielders on the 40-man roster, including top prospect Franklin Barreto, but it hasn’t happened yet. In the meantime, Lowrie has stayed healthy, is apparently sleeping better, and re-established himself as a force in the middle of the order, hitting .283/.355/.475 with eight home runs in 296 plate appearances. With a trio of tasty matchups against the White Sox on tap this weekend, Lowrie should have no trouble against Mike Pelfrey, James Shields and Derek Holland. If you’re looking for a boost at middle infield, it’s time to invest.

How did we get here? Just three weeks ago, Zimmermann owned a disastrous 6.47 ERA in 10 starts, and appeared headed for another dismal campaign in Detroit. To his credit, he made a change. According to Anthony Fenech of the Detroit Free Press, Zimmerman reverted to his old slider grip, and it immediately began to neutralize left-handed hitters. In four starts this month, Zimmerman has posted a vastly improved 2.70 ERA with 21 strikeouts and just eight walks in 26 2/3 innings of work. 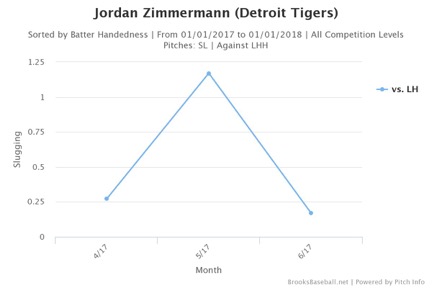 There are still plenty of reasons to be skeptical whether Zimmerman can sustain this level of success, but he’s shown enough over the past few weeks to be considered a viable option in deeper mixed leagues. Fantasy owners should give him the green light against the Padres in San Diego this weekend.

Another veteran starter who seemingly has revived his career after being on the brink of a demotion to the bullpen. The 32-year-old right-hander got off to a dreadful start (5.21 ERA through nine starts as of May 25) and was nearly booted from the rotation before everyone else got hurt. According to Astros beat reporter Jake Kaplan of the Houston Chronicle, a simple mechanical adjustment was all it took to get Fiers on track.

“In the five starts he's made since being told he would be demoted to the bullpen, a decision reversed when Charlie Morton was diagnosed with a lat strain a day later, Fiers has shaved 1.40 off his ERA. The Astros (49-24) have won all but one of them. After dropping his arm angle slightly and throwing his curveball two mph harder, Fiers has kept the ball in the park in each of those five starts after allowing a major-league worst 18 in his first nine outings.”

Without taking a deeper dive into Fiers mechanics, it appears the change in his release point has had a positive impact on his performance, putting him back on the map in mixed leagues. We’ve all been burned by Fiers (pun not intended) at some point in our fantasy lives, but it’s time to trust him again, especially in a rematch with Oakland at home Tuesday.

You know the deal.

The 27-year-old righty has been excellent on the road and flat-out terrible in Coors Field for several years now. That trend has continued once again this season. Ironically, Chatwood’s struggles at home make him one of the lowest-maintenance starters in fantasy. You know when you can trust him, and when he needs to remain on the bench. He’s slated to face the Dodgers in Los Angeles and should be able to post another quality start this weekend. It’s shocking that he’s still available in so many leagues, which is exactly why he’s being featured this week. Even in shallow formats, the road excellence is too good to ignore.

15-team mixed leagues (must be available in at least 75 percent of ESPN, Yahoo, or CBS leagues)

The 25-year-old outfielder has been stashed away in my iPhone notes ever since taking home International League MVP honors with a monster campaign at Triple-A (.306/.365/.420 with 37 extra-base hits and 19 stolen bases in 533 plate appearances) last season. While he doesn’t possess a ton of raw power, he boasts a contact-oriented approach and always is willing to take a free pass (9.5 percent walk rate this season). With Jean Segura off the disabled list, it was Mitch Haniger (not Gamel) who was bumped from the top of the Mariner lineup. Clearly, Seattle likes what they’ve seen from Gamel, who is slashing .354/.414/.487 with three home runs and a pair of steals through 221 plate appearances. Obviously, a .471 BABIP is unsustainable, but with his approach and line-drive stroke, it’s hard to envision his batting average cratering anytime soon.

If there is one area of concern, it’s health. A propensity to sacrifice his body on spectacular defensive plays, crashing into walls and diving with reckless abandon, has unquestionably endeared him to his teammates and coaches, but it also makes him a serious injury risk moving forward. He’s not a big guy, so there will always be durability concerns with a max-effort defender. If Gamel can hold onto the vaunted second spot in the Seattle lineup, he’s going to contribute across five categories, and deserves to be owned, even in shallow mixed leagues. Over the past two weeks, he’s graded out as a top-15 outfielder on the ESPN player rater. Ignore him at your own peril.

It’s a bit jarring that Chisenhall has mashed nearly as many taters (10 in 154 plate appearances) this year as he did in the previous two seasons combined (15 in 780 plate appearances). Let’s set aside the broader factors that could be driving the league-wide uptick in home-run production for a moment. For Chisenhall, a pronounced change in his batted-ball profile appears to be the catalyst behind his recent surge. Simply put, he’s hitting a ton of fly balls. The 28-year-old has increased his fly-ball rate from 40.6 percent over the past two years combined to 51.8 percent this season. That’s a huge development for a hitter who rarely strikes out. He could continue to sit against the clear majority of left-handed pitchers, but he’s doing enough damage against righties to matter in mixed leagues. Given the sudden changes in his profile, Chisenhall is an extremely tough hitter to forecast. It’s difficult to envision him as a potential top-30 fantasy outfielder, but he’s forced his way into the top 50 at the position.

From a fantasy perspective, Slater and Tapia are very similar hitters. They profile as elite one-category (batting average) contributors with the potential to have an impact in runs scored depending on their lineup placement. There are fewer playing-time concerns regarding Slater, who was featured in this space a week ago, and is the superior option for the moment. He’s hitting a superb .310/.365/.466 with a pair of home runs, and appears to be entrenched as the Giants everyday option in left field. With an inside-out swing perfectly tailored for slicing line drives to the opposite field, Slater is going to be an asset in deeper leagues for a long time.

There is more realistic upside with Tapia, who is just 23 years old. Not only will he benefit from playing in Coors Field, which has the potential to boost his batting average even more and enable him to run into the occasional home run, but he also has enough speed to potentially chip in double-digit steals. He’s a poor baserunner right now, but I wouldn’t rule it out in the future. The biggest roadblock to Tapia’s immediate mixed-league relevance is the Rockies outfield depth. If he’s limited to a fourth outfielder role, he might not play enough to matter. Still, he’s hitting .341 in 45 plate appearances and deserves to be on the radar in deep mixers.

The 24-year-old righty posted a 5.52 ERA with 27 strikeouts (8.28 K/9) and 16 walks (4.91 BB/9) over his first six starts (29 1/3 innings). Not very impressive. However, five of those six outings were on the road. It’s no coincidence that he’s pitched much better at home (2.08 ERA with 19 strikeouts and just three walks in 13 innings) in his past two outings. The available pitching landscape has thinned out in deeper formats in recent weeks. There are no exciting options like Alex Wood, Jimmy Nelson, Brad Peacock, Jeff Hoffman or Jacob Faria left to choose from, which is why I’m recommending a starter with a 4.81 DRA right now. He’s striking out enough batters (9.8 K/9) to matter in a deep mixer, but I’d hesitate to use him against the Diamondbacks on the road next week. He’s a nice stash, but you’re going to need to pick your spots carefully with a guy like Pivetta.

AL/NL-only leagues (must be available in at least 95 percent of ESPN, Yahoo, or CBS leagues)

Sure, Fisher was demoted to Triple-A earlier this week, but he will be back shortly. As Mike Gianella and I discussed on the latest edition of the Flags Fly Forever podcast, Fisher possesses an intriguing power/speed combo and the is very little on the horizon in terms of impact prospects that are available in an AL-only format. He’s going to get a shot very soon. For some reason, the Astros have given nearly 200 plate appearances to Nori Aoki this season. Those should go to Fisher. If he got scooped up already, now is the time to float a trade offer.

As my BP colleague Scooter Hotz wrote in his latest Deep League Report, “He won’t displace Dansby Swanson at shortstop or Brandon Phillips at second base any time soon, but it looks like Camargo might have edged ahead of Rio Ruiz in the competition for playing time at third base in Atlanta while Adonis Garcia recovers from a finger injury.”

The playing time at the hot corner will evaporate if the Braves end up following through on their reported plan to move Freddie Freeman across the diamond once he returns after the All-Star break. However, I wouldn’t count on Atlanta vaporizing Camargo from their long-term plans. He’s shown enough to garner a longer look. In an NL-only format, I would squeeze every drop of production out of the next month and then hope that manager Brian Snitker gets creative with the lineup card.

You need to be logged in to comment. Login or Subscribe
Punchoutpappy
George, here's some honest, constructive criticism for you. There have been weeks where I've viewed this article it reads like you've been on autopilot and I've taken very little away from it.

This is not one of those weeks. The content you provided, specifically Zimmerman & Fiers, especially citing beat reporters as to WHY we might want to believe in these changes, is exactly the type of thing that elevates BP above other content. I hope you keep it up as we move ahead in the season.

Last, what's your feel on Mark Zagunis? Granted, it's doubtful he's up beyond a cup of coffee. However, he has hit fairly well at every level and isn't just a random late 20 something filler. The guy was an early round draft pick only a couple seasons ago
Reply to Punchoutpappy
neilar
Re: Gamel - I think the M's said they were going to swap Gamel and Haniger based on situation. Gamel would only lock in that top spot permantently if Haniger goes on a skid.
Reply to neilar
GeorgeBissell
Right. Haniger will bat second against southpaws.
Reply to GeorgeBissell