The Colorado Rockies have been one of the biggest surprises in baseball. They’re currently sitting in first in the NL West, and the success of their starting rotation has been a major reason for this development. Almost all of Colorado’s starters are putting together above-average seasons. That includes Jeff Hoffman, who has been one of the hottest pitchers in baseball.

Adding a Rockies starter to your fantasy rotation is always a risky proposition. Yet, many owners did just that over the past week. In ESPN leagues, Hoffman’s ownership rate jumped from 7.8 to 33.7 percent. That was the fourth-biggest jump. Hoffman went from being owned in 23 percent of leagues to 53 percent over at CBS. In Yahoo’s latest “Transaction Trends,” Hoffman was the third-most added player. He’s currently owned in 46 percent of leagues.

With the growing interest in Hoffman, now is the time to pick him up if you’re going to get him. The question is: Should you? We’ll try and answer that in this week’s Buyer’s Guide.

Hoffman has made only four starts this season, and those appearances were primarily the result of injuries to other starters. However, he’s been great in those starts. In four appearances, Hoffman has tallied a 2.10 ERA. In each of his past three starts, Hoffman has gone at least six innings, and he hasn’t allowed more than one earned run. Hoffman has a 24-1 strikeout to walk ratio over those 20 1/3 innings, and for owners who invested early Hoffman has returned elite results.

Hoffman doesn’t have much of a major-league track record to go on, so these numbers come with the “small sample” caveat. He appeared in eight games for the Rockies a season ago, and that’s the extent of his major-league experience. Even so, his 33.3 percent strikeout rate in 2017 is well above his strikeout rate at any prior level. Not surprisingly, he’s nearly doubled his swinging-strike rate from a year ago (13 percent), and his first-strike rate is up almost 10 points.

There have been a few notable changes to Hoffman’s approach. He’s basically given up on his changeup, which hitters feasted on a season ago. In 2016, batters hit .323 and slugged .548 against the pitch. In its place, he’s become dependent on his slider and curveball. The following chart shows the changes Hoffman has made to his pitch mix in his short career: 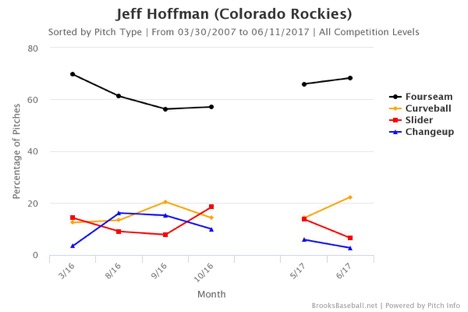 Hoffman’s most effective pitch has been his fastball, which he’s throwing over 60 percent of the time. Batters are hitting just .229 against Hoffman’s fastball, and he’s using it as his primary strikeout pitch. The following chart shows that Hoffman is relying on his high fastball to induce swings and misses when he has two strikes on a batter: 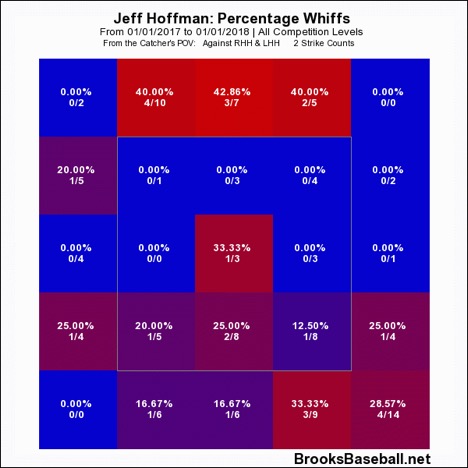 Not only is Hoffman benefiting from more strikeouts, but he’s really limited his walks this season. As mentioned above, he’s walked only one batter in his past three starts, and he’s walked just three hitters in 27 innings this season. In his previous major-league stint, Hoffman’s walk rate was 11.6 percent. His true talent level is somewhere between these two extremes, but his increased control this season is a positive sign.

No one expects Hoffman to keep up this level of production, but there are reasons to be suspect regarding his ability to provide value for the rest of the season. The most obvious issue is that it’s not assured Hoffman will keep his spot in the rotation as other pitchers (Tyler Anderson and Jon Gray) get healthy. It will be tough for the Rockies to limit his innings with his recent success, but regular starts for Hoffman are far from a given at this point.

He also suffers from the kind of numbers you’d expect to see from a pitcher having an unusually successful run. His BABIP is an unsustainable .230, and he’s leaving 83.3 percent of base runners on base. Those numbers are going to regress, and it’s sure to have a negative impact on his others.

Hoffman’s recent schedule has played into his success. His past three starts have been on the road against the Cubs, Padres and Phillies. He’ll finally return to Coors for his next start, but he’s facing the Giants—which should mitigate the risk. Eventually, the lineups are going to get more difficult, and he’s going to have to pitch at Coors. This should temper expectations regarding his value.

Buyer’s Guide: Buy (for his next start)

If you want to take a chance on Hoffman, his next start against the Giants is a low(er)-risk opportunity. Following that start, you should try to get anything for him via trade. Don’t plan on Hoffman being a foundational piece of your rotation, but in the short-term, he should return some value to any fantasy roster.