The Buyer’s Guide is a weekly column designed to help fantasy owners assess a player who sees an increased level of interest during a given week. This column focuses on players who generally have lower than 40 percent ownership rates across various leagues.

Every fantasy roster could always use another quality starting pitcher. Injuries already have taken their toll on several starters, and the frequency with which teams are using the 10-day disabled list has left fantasy owners scrambling. As you look to fill out your rotation for the coming week, is it possible that Nate Karns is now worthy of your attention?

Over the past week, an increasing number of owners have taken notice of the Royals starter. In ESPN leagues his ownership rate went from 2.5 percent to 19.4 percent. Karns was a top-five starting pitcher add in CBS leagues, and his ownership rate jumped from 22 to 43 percent. Over at Yahoo, Karns is owned on 20 percent of rosters.

If Karns wasn’t on your fantasy radar earlier this season, it’s understandable. He opened the year making five appearances (four starts) for the Royals in April. Karns went 0-2 with a 6.26 ERA over that period. Obviously, owners weren’t chomping at the bit for that kind of production.

The reason for the increased interest in Karns has been his performance in the month of May. Over his past three starts he’s gone 2-0 with a 2.08 ERA. Not only that, but Karns has struck out double-digit batters in his past two starts. He’s always been viewed as a pitcher who could potentially offer a lot of strikeouts, but other factors (command and injuries) have tempered expectations. Is it possible that Karns is finally putting it all together?

What factors should you consider before deciding to pick up or pass on Karns in your fantasy league?

The strikeouts are the thing that is going to get the most attention. Karns has punched out 29 batters over his last 17.1 innings of work. For his career, Karns has a 24.2 percent strikeout rate. That rate is at a career high in 2017 (28.4). Are there any reasons to explain this recent run of success?

The most obvious difference from April to May for Karns has been his curveball usage. The following chart from from Brooks Baseball shows how his pitch type frequency has changed start to start. 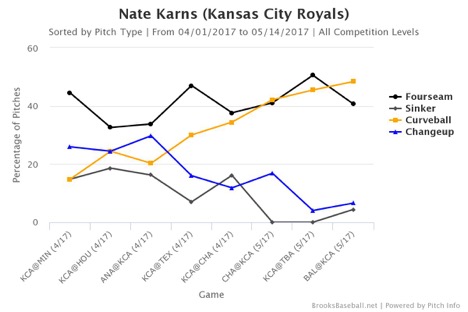 Karns has progressed from throwing his curveball 14.81 percent in his first start to 48.35 percent in his most recent start. His performance against the Orioles on Saturday marked the first time that the curveball was his most-used pitch. The increase in curveball usage has coincided with a decrease in his sinker and changeup frequency. As the season goes on, Karns is primarily relying on two pitches.

The increase in the use of his curveball helps to explain the spike that Karns has experienced in strikeouts. He currently ranks in the top-20 by swinging-strike rate, and Karns’ curveball is a major reason why. The following chart highlights Karns’ whiff percentage by pitch this season. 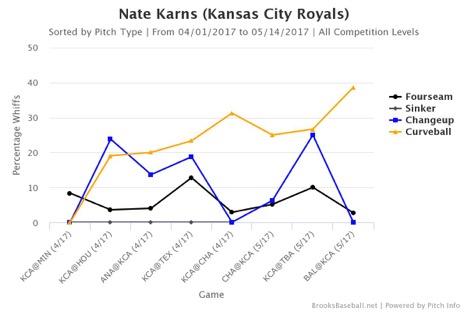 During his previous start, Karns generated nearly a 40 percent whiff rate on his curveball! Clearly, those results aren’t likely to hold, but in the short-term it could offer some solid production. However, an increased strikeout rate isn’t the only positive sign. Karns’ ground-ball rate has jumped to a career high 55.2 percent this season. That’s 10 percent better than his career average, and those two factors combined have fueled Karns’ success.

There are a few concerns worthy of consideration when it comes to Karns. It was only a month ago that he allowed at least 4 ER in three of his five appearances. You don’t have to go too far back into Karns’ game logs to find much different results.

There are also a few concerning trends in Karns’ track record. Over the course of his career, he’s struggled with control issues. Karns has appeared in five major-league seasons, and he owns a 3.65 BB/9 in that time. He’s knocked that number down to 2.90 this season, and he’s only walked more than two batters in one appearance. He’s had this problem in check recently, but it’s not unlikely it could resurface.

Karns’ injury history is also a reason for concern. Rustin Dodd of the Kansas City Star provided a helpful summary of those issues in January. Karns suffered from a torn labrum during his time in the minors. Last season, he dealt with a back issue that forced him to miss the entire second half. Back injuries are always reason for concern, and owners of Karns should be ready for that reality.

There’s a lot to like about Karns in the short term. It appears that he’s changed his approach, and it’s leading to much greater success in his starts. His strikeouts are up, ground balls are up, and walks are down. Those are all positive signs trending in the right direction.

Karns will face the Twins this week, so he has a favorable matchup if you’re looking to add him to your roster. If things start to go south (performance or injuries) you should be ready to cut him loose quickly. However, his recent output is tantalizing enough to invest in.