Depending on the size of your league, it can be difficult to find productive players to fill each outfield spot. Often, there are one or two spots where you’re left playing someone who’s going to get regular playing time, but ultimately could be a drain in several categories. Owners are always on the lookout for quality outfield options.

This is especially the case if you roster an outfielder who has suffered an injury or has been suspended. Adam Eaton and Starling Marte were starting outfielders who are missing a significant portion of the season (all of it, in Eaton’s case). Beyond that, there are several players currently suffering from injuries who find themselves out of action. This list includes players such as Ryan Braun, Joc Pederson, Denard Span, Mitch Haniger, Yoenis Cespedes, David Dahl and J.D. Martinez.

All of this is to say: Every owner probably could use another productive outfielder.

In their search, several owners have looked at Kevin Pillar as one such option. Pillar was the 14th-most added player in ESPN leagues this week, and his ownership rate jumped from 20.1 percent to 39.2 percent. In CBS leagues, the interest wasn’t quite as high, but he did see a bump from 20 to 30 percent. In Yahoo’s latest “Transaction Trends,” Pillar was the third-most added outfielder, and his ownership rate currently sits at 33 percent.

Unless you play in a very deep league, there’s a good chance Pillar is available. Is he worth plugging into your lineup in the short-term, or even as a long-term option? His recent production has garnered attention from some owners. Should you jump on the bandwagon and invest in Pillar as well?

We’ll try and answer that question in this week’s “Buyer’s Guide."

Prior to this season, the only real reason owners were looking at Pillar was for the chance he might provide double-digit stolen bases. Beyond that, none of his numbers were that helpful in fantasy. However, he’s off to a great start. Pillar is currently hitting .313/.352/.525 with four homers, 13 runs scored, eight RBIs, and two stolen bases. In fact, he’s already almost halfway to his PECOTA projection for home runs—nine.

It’s safe to say that no one expects Pillar to be this good for the rest of the season, but are there reasons to suggest he might be better over the course of 2017 than we expected?

All of the caveats about sample size remain necessary, but there are some interesting details to note about Pillar’s approach at the plate. First, Pillar is clearly swinging at fewer pitches outsize of the zone; his O-Swing% has dipped from 37.1 percent to a career-low 31.7 percent. It’s also important to note that he’s increased his swing rate in the zone. His 68.5 percent Z-Swing% would be a career high.

The potential changes to Pillar’s approach don’t stop there. Swinging at fewer pitches outside of the zone has led to a decreased first-strike percentage (53.8 percent). For his career, Pillar had tallied a slightly above-average F-Strike%, but he’s dropped it to a below league-average rate this season. Pillar always has had an impressive swinging-strike rate, but that number has dropped even lower this season (7.7 percent) as well.

Again, those aren’t the only changes worth noticing in Pillar’s approach (potentially). There are some noticeable differences in his swing rates in various parts of the strike zone this season. The first chart below displays Pillar’s swing rates from the start of his career through 2016. 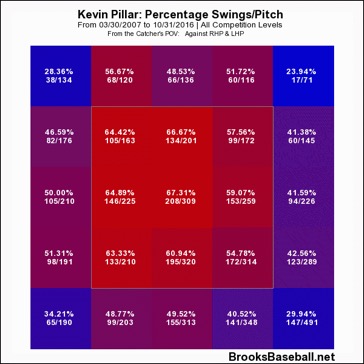 This highlights his swing rates from 2017: 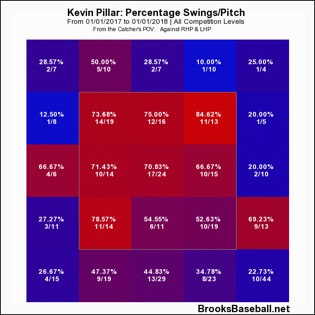 The following chart displays Pillar’s batting average on balls hit in various spots in the zone. Some of his best success comes on pitches in areas he seems to be focusing on. 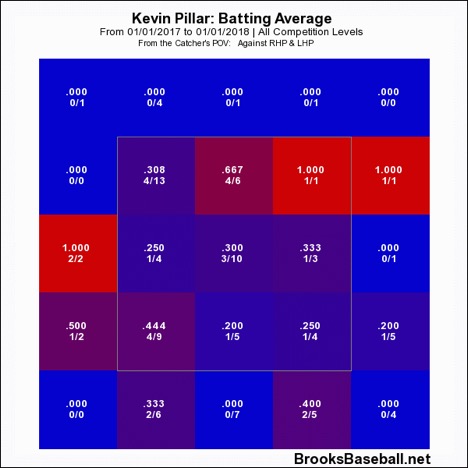 It’s early, but it’s possible we’re seeing a new-and-improved Pillar who’s made some changes at the plate. Yet, there are reasons to be concerned that what we’re seeing is lasting change. One of the first places owners should look when a player is having a hot streak is BABIP. Pillar’s currently sits at .338, which is above his career mark of .311. If you’re expecting Pillar to keep his batting average above .310, or even .300 for that matter, I’d suggest that you adjust your expectations given his track record (.270).

The other negative for Pillar are the lack of indicators suggesting this home-run spike will continue. His HR/FB% is 12.9 percent, which is well above his career average mark of 6.5 percent. That increase has come without a significant bump to his FB% (33.9 percent in 2016 and 36.9 percent in 2017), or his average exit velocity (86.7 mph in 2016 and 87 mph in 2017). His hard-hit rate is up a small percentage, and he’s going to the opposite field slightly less. This data seems to suggest his HR/FB% will come back to something closer to his career average, and that at the most you should expect is something like 10-15 home runs from Pillar this season.

There’s also an assumption of double-digit stolen bases from Pillar. His steals dropped from 25 to 14 in 2016. This season he’s already swiped two bags, but at the time of writing he also led the league in times caught stealing—three. His success rate has been trending downward, and it’s possible he might not run as much if he continues to struggle being successful in this area. Those steals might not be as bankable as you thought they were in previous seasons.

Buyer’s Guide: Buy as a short-term option, but sell as a long-term option

If you need an outfielder to fill a roster spot for the next week or two, Pillar is a solid option. He might continue this hot streak a little longer. If he does, you’ll reap the benefits of picking him up. This should help ease the struggles you experience from having other outfielders unavailable.

However, as a long-term option, there are still plenty of question marks. There are a lot of things to like about his profile as a player. He has a better-than-average swinging-strike rate, above-average contact rate, and he seems to be a more-disciplined hitter this season. That sounds like a good foundation.

Still, the question remains, “Which fantasy categories is Pillar likely to help you in?” The batting average is going to come back to earth, and if you play in an OBP league you should be even more worried. He’s hitting at the top of the order, so there’s the chance he could supply you with a solid run total. But it’s clear that this Blue Jays offense isn’t what it was in previous seasons. Those totals might not be as high as you’d want them to be.

Even the things you were expecting to get from Pillar before this hot streak (stolen bases) are more in doubt than they used to be. If you’re able to pick him up without dropping a player who will provide solid production when healthy, grab Pillar in the short-term. However, you need to think long and hard before letting someone go who would be a season-long starter if you waited a week or two. It’s likely we’ve already seen the best Pillar has to offer, and those numbers are likely to trend downward over the next few months.

You need to be logged in to comment. Login or Subscribe
lmb326
Pillar or Pederson when he's back?
Reply to lmb326
Ericocc
Some of it might depend on what you need. If you're looking for power, then I might lean Pederson. Otherwise, I think I'd go Pillar. You know he's going to see regular time in the lineup every day.
Reply to Ericocc
lipitorkid
I know that MLB > MiLB but based on him minor league track record it looks like he could sustain a .300 BA. Am I wrong? And I love him hitting in the 1 spot. There's really no one on this team who is likely to replace him.
Reply to lipitorkid