The fantasy community was quick to write off Francisco Liriano as being cooked. It's as if the 500-plus innings of 3.26 ERA he posted from 2013-2015 were all a fluke—or that they didn't happen at all. It's also as if not a lot changed in 2016 when hitters punished him, hitting home runs on nearly 19 percent of fly balls. With everything we know about what pitchers can and can't control on the mound, it's a mystery to me why Liriano went from a top-30 arm to one that's barely top-75. Still, I'll humor the notion that there's something to fix. Perhaps there is. I don't even know yet. We're going on this journey together.

It's pretty easy to spot what went wrong in the numbers. After allowing only 16 home runs with his sinker during his three almost-elite seasons, Liriano gifted 14 homers using the pitch in 2016. It never was a particularly safe pitch (it allowed a .297/.396/.429 triple-slash during those aforementioned almost-elite seasons), but the damage ballooned out of control in 2016 to the tune of a .301/.419/.502 triple-slash. Both are bad, to be clear, but wow, that's bad. Also: The outcomes didn't fundamentally change outside the isolated power allowed.

It's also pretty easy to spot what went wrong visually in the zone profile. In 2015, Liriano really only suffered when he grooved the sinker: 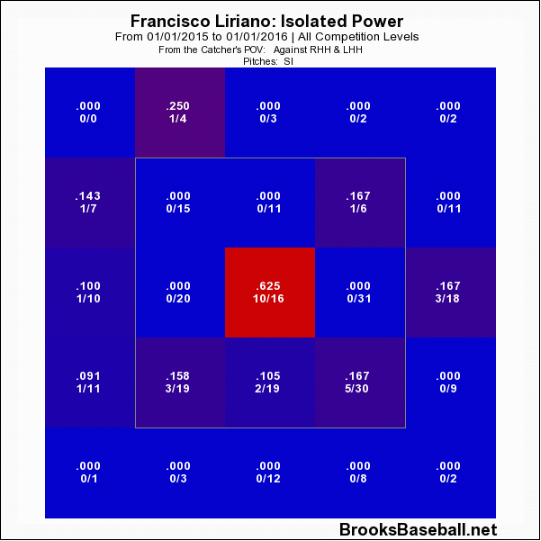 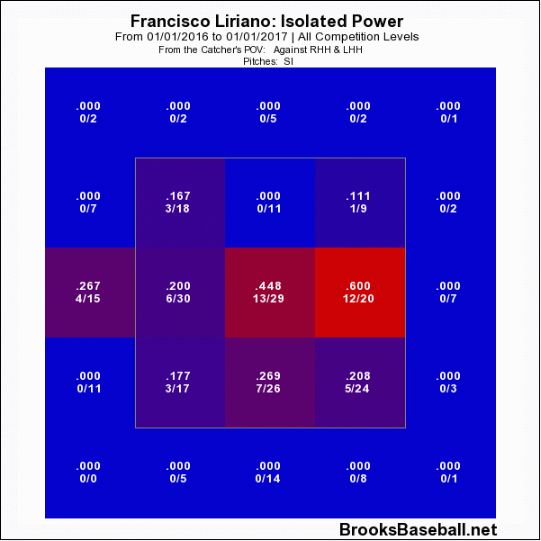 This makes for a good case study, though, because Liriano threw an almost-identical number of sinkers between 2015 (1,287) and 2016 (1,282). Even the number of balls in play he allowed using his sinker in the zone—specifically in each lateral third (lower, middle, upper) of the zone—are nearly identical. Yet somehow, from 2015 to 2016, Liriano went from allowing zero extra-base hits going middle-in to lefties (middle-out to righties), to allowing a dozen in one-third fewer batted balls. Liriano obviously didn't spot his pitch well, but he didn't spot it any worse than he did in 2015. It only accounts for a couple of home runs, per my calculations, but it's just an example of what I'm alleging to be a little bit of bad luck in the zone.

There might actually be a culprit, though: His sinker lost all of its vertical movement, and the additional horizontal movement he picked up last year runs counter to how he seemingly succeeded in from 2013 through 2015. It ultimately resulted in him leaving the pitch up, and he hurt himself by feeding lefties inside more than ever before. They teed off on him, and he hit five with pitches—almost as many as he hit from 2013 through 2015 combined.

So, maybe Liriano isn't fixable. It's hard to say. I'm not him. His release points are all over the place, so I'm not sure that's the primary issue. Command has never been Liriano's strong suit, but whatever command he had of his sinker has eroded, either because he couldn't spot it, or it broke differently, or both. It'll take an adjustment, but probably not a big one. It'll also take a shift in his fortune—something over which only the baseball gods control (command?). Liriano could afford to do himself a favor, but if nothing about his approach changes—yet success returns—we could be wondering in September why we ever doubted him in the first place.

This offers more of a diagnosis than a prescription, and it's a dubious diagnosis at best. But it suggests to me, as it probably did to other Baseball Prospectus staff who are bullish on Liriano for his dirt-cheap draft price, that there was—and still is—a good buying opportunity here. He'll always be a high-WHIP guy, but with his strikeout and ground ball tendencies, he can work that strand-rate magic again and once again revert to his mid-3.00s ERA self.