Robbie Ray has been much talked about by both fantasy owners and baseball fans. Sam Miller profiled Ray fantastically in this ESPN piece from November. Depending on which pitching stats you place the most emphasis on, Ray’s 2016 season varied anywhere from significantly below average (run prevention) to above average (Fielding Independent Pitching, Deserved Run Average). Ray’s 4.90 ERA ranked fourth-worst among the 64 starting pitchers who threw at least 170 innings last year, and his park-adjusted ERA- of 112 ranked 54th out of 64. His 3.88 DRA ranked 31st. His 3.76 FIP ranked 21st.

Because of the disparity, different fantasy owners have different valuations and expectations for Ray this upcoming season. The pro-Ray crowd looks at his predictive ERA estimators, which points towards a huge regression in BABIP, and in some cases home runs. The anti-Ray crowd looks at his proneness to getting hit hard and lack of a good third offering to get through a lineup more than twice.

I am going to examine Ray from a Statcast perspective, which I don’t think has really been done yet, from what I’ve seen. A large part of the reason for Ray’s polarizing season was a .352 BABIP against, which is incredibly high. In fact, it is the fifth-highest single season BABIP in the live ball era for a qualified pitcher, which dates back to 1920. How much of that .352 BABIP was bad luck and bad defense and how much was his own fault for ineffective pitching?

Checking his Statcast derived contact quality can give us some idea of what type of contact opposing batters were making against him last season. Was he historically unlucky on batted balls, or did he get clobbered with a lot of hard contact at velocities and angles that make it difficult for fielders to convert into outs? Was it maybe a little bit of both?

Andrew Perpetua’s Statcast derived xStats.org takes every batted ball velocity and angle combo available of every hitter's batted balls and looks at the prior outcomes of similar batted balls to create an expected value. Based on the exit velocities and angles of every recorded batted ball Ray gave up all year, xStats thinks his BABIP should have been around .337 last year. It’s lower than his actual his actual BABIP of .352, but it’s still really high. Ray’s .337 Statcast xBABIP was the highest xBABIP among any pitcher who threw over 120 IP last season.

His Statcast expected home run total isn’t much different. Ray gave up 24 home runs last season, and his expected HR total based on the exit velocities, launch angles and horizontal locations of the batted balls opposing hitters generated off Ray was 23. That would drop his HR/FB% from 15.5% to 14.8%.

Breaking it down further, Ray was poor at preventing all types of well-struck contact, from hard grounders to hard fly balls. 19.5% of his ground balls had an exit velocity above 90 mph with a ground-ball launch angle above 0 degrees, higher than the MLB average of 13.5%. These types of ground balls produce a .550 BABIP league wide and are well equipped to maintain their speed through the infield and make it difficult for infielders to field them. Here’s an example of Ray giving up a hard groundball with an exit velocity of 102 mph and a launch angle of 2.5 degrees.

The video is a good example of poor execution of command, the type of mistake pitch that can get hit hard. The target is low and away, but Ray misses his spot, leaving a fastball middle-middle. 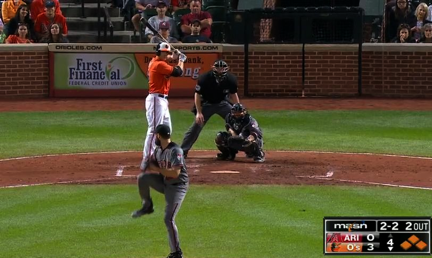 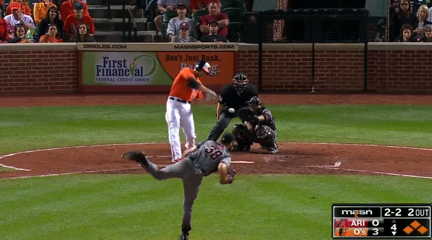 All together, Ray was poor at preventing hard hit balls. Batted balls that have an exit velocity of 100+ mph with a launch angle above 0 degrees have resulted in a batting average of .720, a BABIP of .640, and an ISO of .900 league wide. 23.6% of Ray’s batted balls fall into this hard contact range, the highest rate in baseball among qualified starters. League average is 17.3%. Ray gave up a hard-hit ball by this criterion 99 times, the eighth-highest amount in baseball. There is a lot of evidence from Statcast that Ray got whacked around with hard contact at velocities and angles well equipped to knife through defenses and do damage, and that’s the primary reason why his BABIP was so high.

It should be noted that Statcast does have imperfections. The system has a difficult time consistently recording the exact angles and velocities of certain types of batted balls, mostly on the low and high end. Rob Arthur found in August that Chase Field is missing the highest percentage of data among all major league parks at just under 22%. Was a disproportionate amount of Ray’s weakly hit balls going unrecorded compared to the rest of the pitchers in baseball, fudging his contact quality statistics? It doesn’t look like it. 13% of Ray’s batted balls from 2016 are missing an exact exit velocity and launch angle combo, which is about in line with what the MLB average is for pitchers around baseball.

Despite the hard contact, not all of Ray’s high BABIP can be blamed on him. Chase Field is a notoriously difficult park to pitch in. There is a lot of space in Chase Field’s outfield for batted balls to fall in, and since 2008, Chase Field has ranked as the third-highest park in allowing pitcher BABIP, at .313. It is the second-highest park altitude in baseball behind Coors Field, and the dry air can make gripping and controlling the ball more difficult. Ray’s career BABIP on the road is .309, way less than his career Chase Field BABIP of .368. Last year, his road BABIP was .323, 58 points lower than it was at Chase Field.

Ray pitched to catchers who have poor pitch framing skills last year. Arizona was ranked as the fifth-worst catcher team by BP’s Framing Runs. Welington Castillo, who caught 18 of Ray’s starts and 55% of his innings last year, graded as BP’s ninth-worst pitch framer in 2016, ranking 106 out of 114 with -9.8 framing runs. Tuffy Gosewich and Chris Herrmann, who caught 42% of Ray’s innings, also ranked as below-average pitch-framers. If poor pitch framing was putting Ray behind in counts more often and forcing him to make pitches he otherwise wouldn’t have made with a better catcher, that certainly wouldn’t help him prevent hard contact. Batters have significantly better results when they are ahead in the count compared to when they behind in the count.

Ray’s defense wasn’t exactly good behind him, either. Arizona’s defense ranked as the second worst defensive team in baseball in 2016 using BP’s park adjusted defensive efficiency metric, at -3.73. Check out this video of the slow footed Yasmany Tomas lumbering after a weakly hit flyball with an exit velocity of 80 mph and launch angle of 47 degrees.

Batted balls with this exit velocity, launch angle and horizontal location typically result in expected BABIPs of close to .000. Tomas not only doesn’t catch it, but allows it to roll past him and Arenado to advance to third for a triple.

The anti-Ray crowd points to a lack of a good third pitch as a reason for his struggles, and the statistics support it. Ray’s fastball and slider are both above average pitches, but his change up has been poor. It generated a well below average swinging strike of 8.6% last year, with MLB average swinging strike rate on a change up at 15%, and the OPS against his change up was a disastrous 1.304. It’s part of the reason why Ray gets killed as he goes through the order and batters see him more often in that game. We know that there is a league wide penalty for pitchers as they go through the order, ranging about 75 OPS points from the first time they see a SP to the third time they see a SP in the same game. Ray’s splits are extreme. The first time through the order, opposing batters had a .579 OPS against Ray in 2016, which is fantastic. MLB average OPS the first time against a pitcher is .721. The second time through, batters had a .787 OPS against Ray, higher than the MLB average of .755. The third time through is where it really gets ugly. Batters had a 1.030 OPS against Ray the third time they saw him in a game, way above the MLB average of .796.

The good news for Ray in 2017 is that Welington Castillo is now in Baltimore, and Arizona has signed Jeff Mathis to replace him. Trading Castillo for Mathis, who ranked 15th best in pitch framing last year at 7.5 runs above average, will probably help Ray next year. A.J. Pollock and David Peralta will also return to help improve the outfield defense.

And just because Ray was prone to getting clobbered with a lot of hard contact last year doesn't mean that will definitely happen again this year. It's possible he makes improvements in command or a third pitch and starts preventing runs at an above average level. It's also possible hitters don't crush his mistake pitches as often as they did in 2016. He certainly has fantasy upside with his strikeout ability. But if his skill set remains the same as it was in 2016, there’s evidence that Ray’s BABIP will probably still be elevated, even with defensive improvements behind the plate and in the outfield. In the end, Ray might be a really good reliever down the road, a guy who can be effective a few innings at a time with mid-90s heat and a good slider.