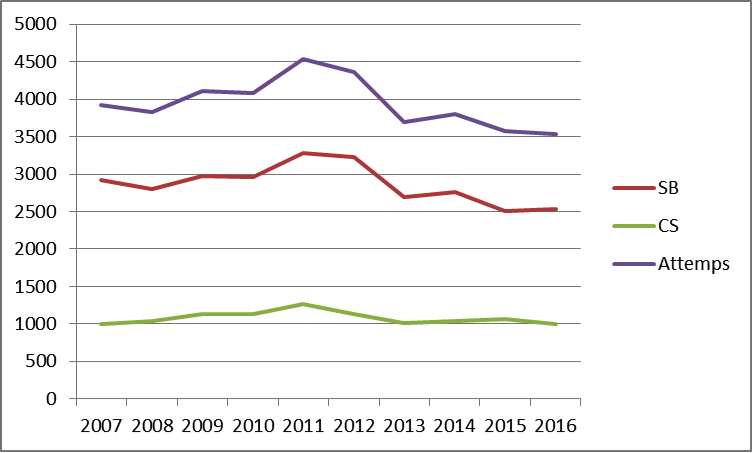 While caught-stealing totals having remained pretty much flat, stolen-base attempts and stolen bases were down in 2016. The consequence of this is that a single stolen base was more valuable in fantasy baseball in 2016 than it was in any season over the past 10 seasons.

Upon reading or knowing these things, most fantasy baseball participants start to think the same thing—that it will likely be worth paying up for a top base stealers and that failing to do so will make competing in the category impossible. These conclusions are likely the result of scarcity on the brain. We discussed the “scarcity principal” as coined by Robert B. Cialdini in the very excellent Influence: The Psychology of Persuasion during shortstops week last year, but we’ll run back the quoted text because it is (i) excellent and (ii) a personal favorite:

“In the instance of the scarcity principle, [the power to influence] comes from two major sources. The first is familiar. Like the [previously discussed] weapons of influence, the scarcity principle trades on our weaknesses for shortcuts. The weakness is, as before, an enlightened one. In this case, because we know that the things that are difficult to possess are typically better than those that are easy to possess, we can often use an item’s availability to help us quickly and correctly decide on its quality. Thus, one reason for the potency of the scarcity principal is that, by following it, we are usually and efficiently right.”

“There is a unique, secondary source of power within the scarcity principle: As opportunities become less available, we lose freedoms; and we hate to lose the freedoms we already have. This desire to preserve our established prerogatives is the centerpiece of psychological reactance theory, developed by psychologist Jack Brehm to explain the human response to diminishing control. According to the theory, whenever free choice is limited or threatened, the need to retain our freedoms makes us desire them significantly more than previously.”

Scarcity makes us think that stolen bases are more valuable, which is correct. The scarcity principle, though, will also cause us to ignore the cost or opportunity cost of obtaining that which is scarce, which, in sum, is not valuable. More succinctly, scarcity, as it relates to fantasy baseball, allows us to both identify that which is valuable and overrate that which is both scarce and valuable.

Consequences of the above

When we combine the scarcity principle and the magnitude effect with other behavioral phenomena such as our preference for keeping options open (such as being able to compete for the top spots in stolen bases), our disdain for uncertainty, and our tendency to overweight recency, we tend to overpay for players with set roles that performed well the previous season. Even if we do not over pay, these factors combine to make the draft and auction day prices for these players—the best fantasy baseball players with the highest projected stolen base totals—high enough that there is little to no value to be had.

While this sounds like all bad news, it is assuredly not; in fantasy baseball, whenever something becomes overrated, other things become underrated. In this case, players with average to above average stolen base projections (five to 20 projected stolen bases depending on the position) can often be acquired for below value because their stolen base production is valuable, but often not properly appreciated (this is our queue to target Odubel Herrera, Lorenzo Cain, Adam Eaton, Dustin Pedroia, and D.J. LeMahieu). The other bargain that emerges is players that provide stolen bases, but who lack a set role. Players like Rajai Davis and Jarrod Dyson have provided incredible return on investment over the past few years and they have done so because the market shied away from their uncertain or less traditional/regular roles. In fact, outside of 2015, there have been at least ten players who stole twenty or more bases while not accumulating enough at bats to qualify for the batting title in each of the last five seasons. Note, this is our queue to target Rajai Davis, the 44th most valuable hitter in mixed leagues last season, who is currently going 49th among outfielders in drafts. This is also our queue to bump up our valuations for players with high steal potential that lack definitive role on draft or auction day.

These recommendations feel riskier than taking one of the top stolen-base players in the first four rounds, but reaching for those players and leaving better players on the table is a worse bet. When we consider that this mistake (reaching for the top “high stolen bases” players) likely decreases our chances of taking advantage of the discounts afforded by these very mistakes, the riskiness of these recommendations seems to lessen. Lastly and most importantly, these recommendations only feel risky because we are not hardwired to make rational decisions regarding scarcity and uncertainty; and if we can be the ones that can best adjust our decision-making to consider this, we are more likely to give ourselves better odds at winning this season.

You need to be logged in to comment. Login or Subscribe
heterodude
Great article. Really provides insight in how to get your Stolen Bases to POP POP!
Reply to heterodude
kallistiapple
Cue not queue
Reply to kallistiapple
TroJim
I really appreciate your insights. I wonder if the true cost of chasing steals is higher in a standard draft than in an auction, or if it just seems that way. In a draft, reaching for SB in an early round has a very tangible opportunity cost...you miss the opportunity to draft one of 12-15 other more valuable players (until you turn comes around again). In an auction, paying a few dollars above projected value to acquire SBs has a seemingly less tangible impact on your draft, especially if your wallet is full at the time of the bid. By overspending, you lose some purchasing power, but you don't know exactly where it will fall and you can control where it won't fall. If you want one of those 12-15 players than you would have missed in a standard draft, you can still bid on them in an auction.

Obviously, the true cost of chasing SBs in an auction will depend upon how the individual markets react to the scarcity, but I wonder if there is a market inefficiency which is unique to auctions which can be predicted based upon study of market psychology. Probably an article unto itself.
Reply to TroJim
kvamlnk
Does this include opportunity costs? The more value you can pack into a roster slot, the better. Consider the 3 players who are identical except for SB totals of 5, 15, 25. You are assuming a linear valuation function. The PFM gets around that by using inflation as the players are picked from the pool. I get that statistically P25 + P5 = 2 * P15, but you might find that P5 is discounted enough to justify grabbing P25 as opposed to getting 2 P15's.

I enjoy the article and do not mean to give you grief. Assembling a fantasy team is surprisingly difficult in a deep, competitive league.
Reply to kvamlnk
mwb1063
excellent, excellent insights! Emotionally I feel the "tug" to a Billy Hamilton that you describe as it is painful to draft uncertain playing time (eg, DeShields and Burns in 2016) versus the "certainty" of a top guy as SB become more difficult to find. Appreciate you sharing the intellectual background to a topic most of us feel emotionally.
Reply to mwb1063