Despite the $250 million Opening Day payroll, it’s weird to assert that the Los Angeles Dodgers’ best hitter (in the non-Corey-Seager division) is a 31-year-old journeyman who was non-tendered by the Mets just three years ago.

Justin Turner has hit a combined .299/.368/.495 since joining the Dodgers in 2014, yet he’s never amassed more than 500 plate appearances in a single year. He’s on pace to do so this yearâ€‘as long as his hand injury remains minorâ€‘and is one of the hottest hitters in Major League Baseball. Over the last 30 days, he’s hitting .330/.374/.670 with eight homers and two stolen bases for the Dodgers, and he’s been the third-ranked fantasy third baseman over that stretch.

It wasn’t a sunny start to the season for the red-haired third baseman. As of June 12, he was hitting .221/.312/.348 and had just suffered an oh-fer against the San Francisco Giants on the road. Manager Dave Roberts noted around that time that his on-base skills kept his spot in the lineup safe, and the Dodgers’ skipper has been rewarded with a .330/.373/.660 slash line with 17 doubles and 16 stolen bases since that point in June.

Some may point to a sore knee as one of the key reasons why Turner struggled early in the year—and that may be true—but he also wasn’t using the pull side of the diamond much, at least not in the air. Take a look at his spray chart before that arbitrary endpoint: 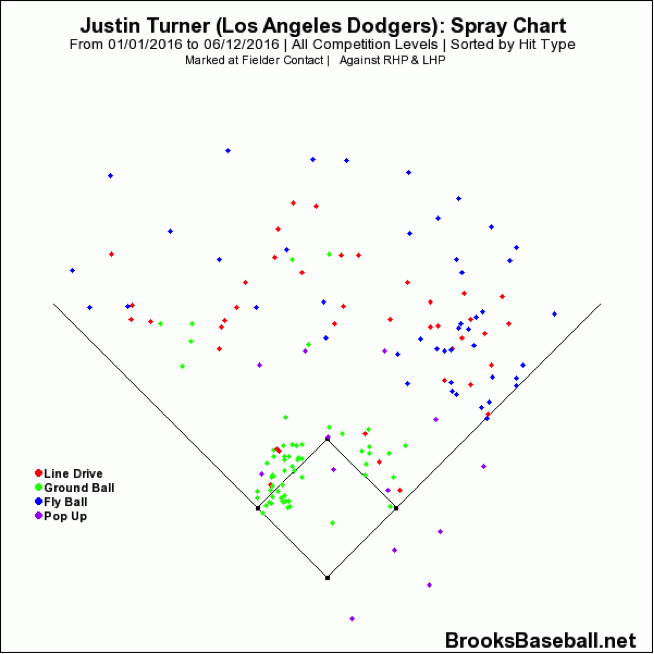 Ground balls peppered the left side of the diamond; however, the vast majority of the fly balls went to right field. This kept him from driving the baseball, limiting his power production for fantasy owners. 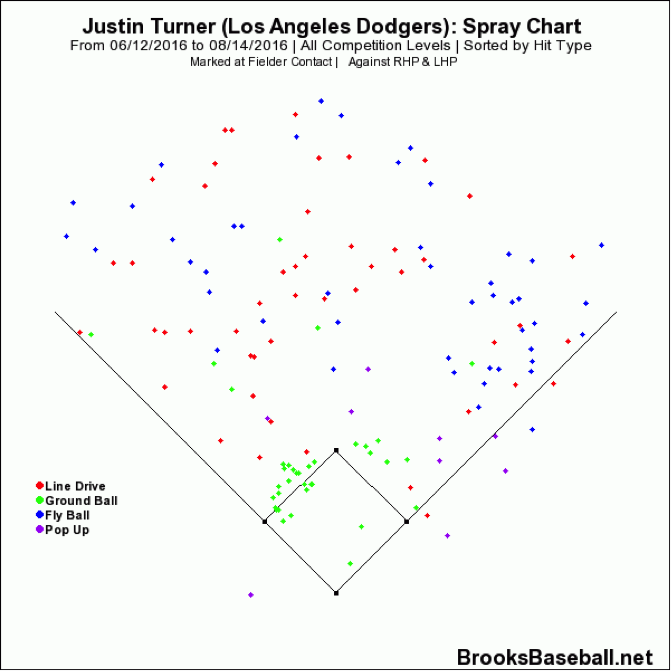 Turner has better pulled the baseball in the air, which has caused his power production to skyrocket. It also matches what he had done in previous years, perhaps lending a bit more credence to the argument that distrust of his knee kept him from driving the baseball in April and May. He wouldn’t be the first big-league hitter to ease his way back to full form.

His average batted-ball numbers look good, too, which only furthers the confidence that his power uptick is legitimate. His average fastball and line drive velocity is 93.4 mph, which is above the league’s average, but his average fly ball is going 242 feet. That ranks 15th-best in all of baseball. I’m not convinced that we have enough evidence to suggest that batted-ball velocity and batted-ball distance is predictive of future success on its own; however, when it affirms past production, it seems to lend more weight to the raw power totals.

The other attractive thing about Turner as a hitter is that he lacks a traditional platoon split. In fact, the past two years, he’s hit better against righties than he has against lefties.

It’s a bit disturbing to see Turner struggle against lefties as a right-handed hitter, I suppose, but he’s consistently compiled better walk rates (by roughly double) against lefties as compared to righties. It makes me wonder if the numbers don’t have a bit of improvement coming up, not just because significantly increased walk rates seem to suggest better pitch recognition, but his .195 BABIP against lefties this year also screams for standard statistical correction.

Looking forward, too, Turner is poised to become a free agent at the end of the season. Whether he remains in Los Angeles or signs with a different team, the 31-year-old is about to get paid this winter. He’s transformed himself from a utility fielder who couldn’t stick on a mediocre club to one of the key cogs of a postseason contender. He now has a track record of hitting that spans three years and a platoon split that suggests his next manager won’t have to limit his playing time based upon pitching matchups.

Turner’s fantasy potential is a bit lower than it otherwise would be due to the fact that he doesn’t steal many bases—never more than seven in a big-league season—but his high-average, 20-plus homer profile in the middle of a batting order more than makes up for that. Much like J.D. Martinez, fantasy owners shouldn’t miss the bandwagon just because he’s a bit older and we all watched him fail for a few years. The track record is there. The skill set is there.

Now could be an intriguing time to buy because of his hand injury, but he’s not expected to land on the DL. Swooping in as the fantasy trade deadline nears—or perhaps it has gone, depending on your league’s specific rules—would be a wise move. If the trade deadline has already past, consider this an early “buy” recommendation for the 2017 season, unless something crazy weird happens this winter and he signs for a club with a putrid offense, like the Braves or the Padres or something.