On the heels of an injury-ridden 2015 that saw his numbers regress across the board, Yasiel Puig slipped from a borderline-top 20 guy on Mike Gianella’s Top 300 list a year ago to 77th on this year’s pre-season version. And after an awfully pedestrian first couple months of the season, in which he hit just .239 with nearly five whiffs for every walk, his value cratered all the way to 201st in Mike and Bret Sayre’s late-May update. Similarly, he slid from 46th on Bret’s pre-season Dynasty Top 500 into triple digits at 104 in the July update. It’s a freefall! Puig’s value is in freefall, I say!

So what are we supposed to do with him now? The good news is that he remains a physical specimen with an absurd arm, and if FRAA is to be believed, he’s been one of the best defensive right fielders in baseball this year in spite of a trip to the disabled list and periods of sporadic starting. All of those things are well and good, and the defensive value in particular is helpful fantasy-wise insofar as it keeps him in the regular lineup even when he’s struggling offensively. But offensive struggle has been the norm for Puig pretty much all season long. His below-average .255 TAv ranks 24th among right fielders with at least 250 plate appearances, just behind Pete Bourjos. Yes, the Peter Bourjos who was drafted 528th overall in leagues deep enough that people drafted Peter Bourjos. Puig’s return on investment has been… well, not good for fantasy players who drafted him in the fifth round this past spring. And it’s been an even worse development for those who are pot-committed in dynasty leagues. So let’s take a look at why his bat has been so lethargic this year, and whether there’s still hope for a sequel to his first impression.

To the nuts and bolts! Puig’s overall contact rate isn’t much different this year, and he’s actually shown marginal progress in making contact against preferable pitches; he’s chasing less, and when he does expand the zone he’s making much less actual in-play contact against bad balls. He’s managed to offset those lost points contact percentage by hitting strikes a bit more often, too. In other words, he’s making roughly the same amount of contact overall, but he’s making that contact on pitches that give him a better chance to make good contact.

True to form, his average exit velocity has crept up, and it checks in around the 80th percentile. The available StatCast breakout actually paint a fairly encouraging picture, as well. Here are his average year-to-year exit velocities by category:

The thump is particularly impressive on groundballs, which he hits at a top-25 overall speed among major-league hitters. And at first glance, the jump in FB/LD EV should portend good things, too. But when we dive a little deeper, we find him struggling to square and drive the pitches he lifts, and that’s been thematic of his career to date. His line drives are scalded still, but his average fly ball distance checks in at just about the 30th percentile. That low average distance has been a primary contributor to a homeruns-per-fly ball rate in the single digits this year, and it is borne out by an infield pop-up rate that is the highest in the majors for any hitter with at least 250 plate appearances.

So what we’re- waaaaait a minute now, let’s back up. The highest infield pop-up rate of any big-league hitter?! Yeah, there it is, right there. Puig has popped up over a quarter of the balls he’s put in play this year, a rate roughly triple his effort in either of the previous two seasons. Predictably, the vast majority of his pop flies to date have gone to the right side of the diamond, which is what happens when a hitter gets sawed off inside. But it isn’t quite so cut-and-dried a scenario.

The established—and effective—book on Puig for a good while now has been to pound him inside with hard stuff, then watch him flail away at sliders away. There’s still a lot of that going on, and it’s still working out just fine for pitchers. But the interesting thing appears to be that Puig, perhaps in attempting (unsuccessfully) to combat this standard attack, has sacrificed his inner-third coverage all the more, pitchers are noting it, and they’re attacking with hard stuff much more liberally as a result. He’s seeing more fastballs overall this year per PITCHf/x, and pitchers are drilling down middle-in with increased impunity. Take a look at his fastball distributions from last year and this: 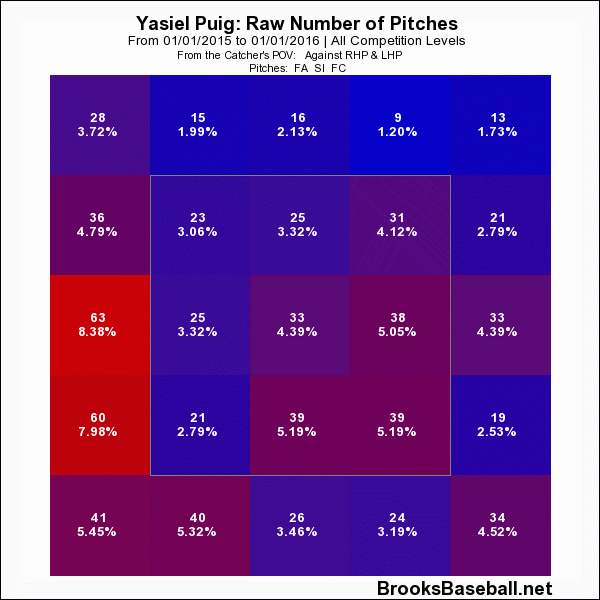 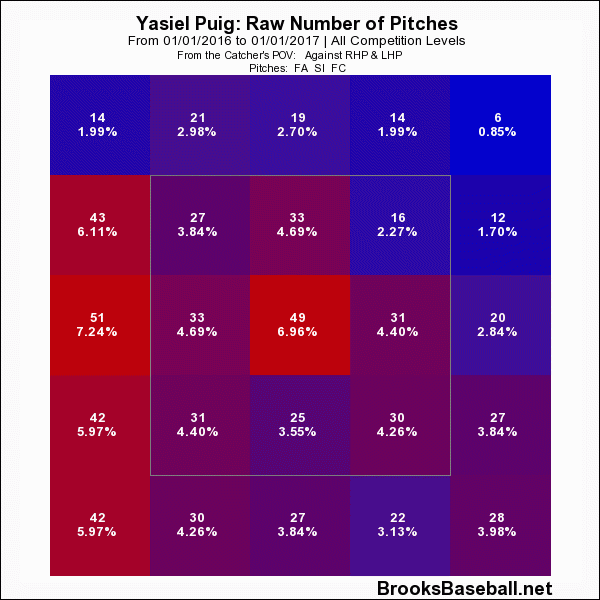 Hurlers have attacked Puig with what we might designate as “middle-in” fastballs about five percentage points more often. That number has grown as the season has progressed, and it should: four-seamers in particular have given him a lot of trouble:

He’s still getting his hits against the hard stuff, but he’s not consistently driving it with anything close to his normal punch. The down performance against four-seamers hasn’t discriminated too much against left-handers or right-handers, though it is certainly worth noting that his numbers against southpaws are down more.

That brings us to the second major driver of Puig’s lost pop: changeups, and specifically left-handed changeups. He’s seeing fewer of them this year as a percentage of pitches, but the relative scarcity is apparently reflective of harsher sequencing, because cambios have been devastatingly effective against Puig. And that’s a big, new thing. Here’s how that same fastball chart looks for changeups:

So what are we left with here? In a nutshell, Puig’s approach and swing vulnerabilities are now well-known to pitching staffs league-wide, and the holes in both are now being exploited at will. He’s still struggling to lay off right-handed sliders. Conscious of that, he’s getting himself beaten by middle-in hard stuff. Conscious of that, he’s getting himself out against left-handed changeups at some kind of a clip.

Big-league pitchers have made their adjustments to Yasiel Puig, and that’s a long laundry list of counter-adjustments that Puig will in turn need to be make if he’s ever going to consolidate the stop-what-you’re-doing-and-watch offensive potential he has routinely flashed since his arrival in Los Angeles. I’m not confident in a quick-fix, and I’d just as soon move on from him in re-draft leagues. In dynasty formats there’s a moderate buy-low window here, as the heavy exit velocities and gradual contact improvements suggest plenty of untapped potential remains within the 25-year-old. I wouldn’t go trading a signed Kent Hrbek Donruss Diamondkings card or anything for him, as the dangers are real that this stagnant plateau is his ceiling. But he’s a gamble worth taking if you can scoop him up in the discount bin.