Welcome back to the latest installment of TDGX Transactions, BP’s weekly series providing fantasy owners with an inside look at The Dynasty Guru Experts League (TDGX), a 20-team (40-man roster) 5×5 rotisserie dynasty league. It is the literal embodiment of the phrase “deep dynasty.” It’s also populated by some of the most talented fantasy baseball analysts and competitors on the planet. In addition to taking an in-depth look at each week’s TDGX free agent acquisitions ($100 FAAB budget per team with zero dollar bids allowed) we will also break down every major trade, with perspectives from both sides of the deal.

It’s been a few weeks since our last installment and I’m excited to take a break from explaining the Taylor Swift and Kanye/Kim thing to my parents for the hundredth time. Our journey into TDGX Transactions begins with 32-year-old Cuban infielder Yulieski Gurriel, who signed with Houston last week.

The big-ticket FAAB acquisition was rescinded due to TDGX league rules, which prohibit the pickup of international free agents who sign mid-season. Fortunately, for the purposes of this column, we aren’t limited by those restrictions and are free to discuss Gurriel’s value for dynasty purposes. A topic every dynasty owner has spent time considering these past few days.

Gurriel’s professional career began at just 17-years-old in Cuba’s Serie Nacional where he played 14 seasons (2001 to 2014). A two-time MVP and widely regarded as one of the best hitters in Cuba over the past decade, there is plenty of reason for fantasy owners to be excited. In his final Serie Nacional stint back in 2015, he hit an absurd .500/.589/.874 with 15 home runs, 38 walks and just three strikeouts in 224 plate appearances. MLB.com’s Jesse Sanchez reported that Gurriel is expected to need only 50-60 at-bats to iron out his timing against minor-league pitching before he will be ready to join Houston’s lineup.

Despite the considerable layoff from the time he last faced live pitching, Gurriel should be ready to make an immediate impact for the Astros lineup, making him a strong target for dynasty owners looking to contend right now. Given his age, there is a strong possibility we’ve already seen Gurriel’s physical peak and there isn’t much (if any) long-term upside left to be harvested. However, given his extensive track record in Cuba and the glowing reports from those who have watched him play for the last decade, he’s worth the investment even in shallow formats.

Melchior’s bid, which amounts to nearly half of his original $100 FAAB budget, serves as a logical price point for prospective owners in dynasty leagues that have the ability to add the veteran import to their rosters right now. Yulieski’s younger brother, 22-year-old Lourdes, is the more intriguing dynasty target for rebuilding franchises, but when it comes to championship contenders with a healthy stockpile of FAAB left, this type of hitter they should be aggressively pursuing.

“Like a moth to a flame, or something like that. With the mass exodus from the Padres' rotation, a spot opened up for the former Dodger, Devil Ray, Ray, Tiger, Diamondback, White Sock, Cardinal, National, Cub, Brave and Marlin. It's almost amazing that there are still teams out there that he hasn't pitched for. Jackson was maddeningly consistent from 2009 to 2012, settling in as a pitcher who always looked better than he really was (but was still pretty good). Then the Cubs' contract happened and he became maddeningly inconsistent and mostly terrible—ending up in the bullpen for the entirety of both 2015 and 2016. Until now.

Yet, almost like he was cryogenically frozen, he's pretty much the exact same guy as he was the last time he was good. In 2012, his average fastball velocity was 94.2 mph and in his first start back with the Padres on Sunday, he was at 93.9 mph. Not bad for a guy going from his 28th birthday to his 32nd. And yes, he's still only 32 years old. He touched 98 twice on Sunday, snapped off some good sliders to miss a few bats and tired towards the end of the start—not surprising given that he hadn't throw 60 pitches in an outing since 2014. Of course, even with carrying a no-hitter into the seventh, he still walked five batters and only struck out four. As long as he stays upright and doesn't completely self-destruct, he should get a fair shake in the rotation for the rest of the season, and that alone in Petco makes him worth monitoring.” –Bret Sayre

The 27-year-old backstop has morphed into a relevant fantasy option at the position, hitting for both power and average with Philadelphia this season. In 233 plate appearances, he’s hitting .283/.326/.493 (.281 TAv) with 27 extra-base hits (nine home runs) and has even chipped in a stolen base. Catchers typically take longer to develop, especially offensively, so it shouldn’t be a tremendous surprise to see Rupp finally reaching his potential at an advanced age. The batting average, propped up by a seemingly unsustainable .351 BABIP, should come back to earth, but if he can continue to hit for power, the Texas product should remain relevant in two-catcher formats.

Middle relievers are woefully undervalued in fantasy baseball, especially in dynasty formats. The fact that it’s difficult to quantify their impact (we can’t immediately point to a prodigious save total or gaudy strikeout numbers) is the biggest contributor to the problem. However, if you pull up Mike Gianella’s in-season valuations from earlier this month and you’ll notice that Dull has already earned $16 in AL-only formats. The 26-year-old right-hander has excellend for Oakland this season, posting a 2.05 ERA (2.58 DRA) with 50 strikeouts (9.3 K/9) and just 10 walks (1.9 BB/9) over 48 2/3 innings. It’s easy to look at his preposterously low .176 BABIP and scream regression, but his deceptive delivery induces plenty of weak contact, as evidenced by his average exit velocity numbers this season, (courtesy of Baseball Savant’s Statcast data). When batters do square him up, the ball has a tendency to leave the yard, leaving his BABIP unblemished in the process. 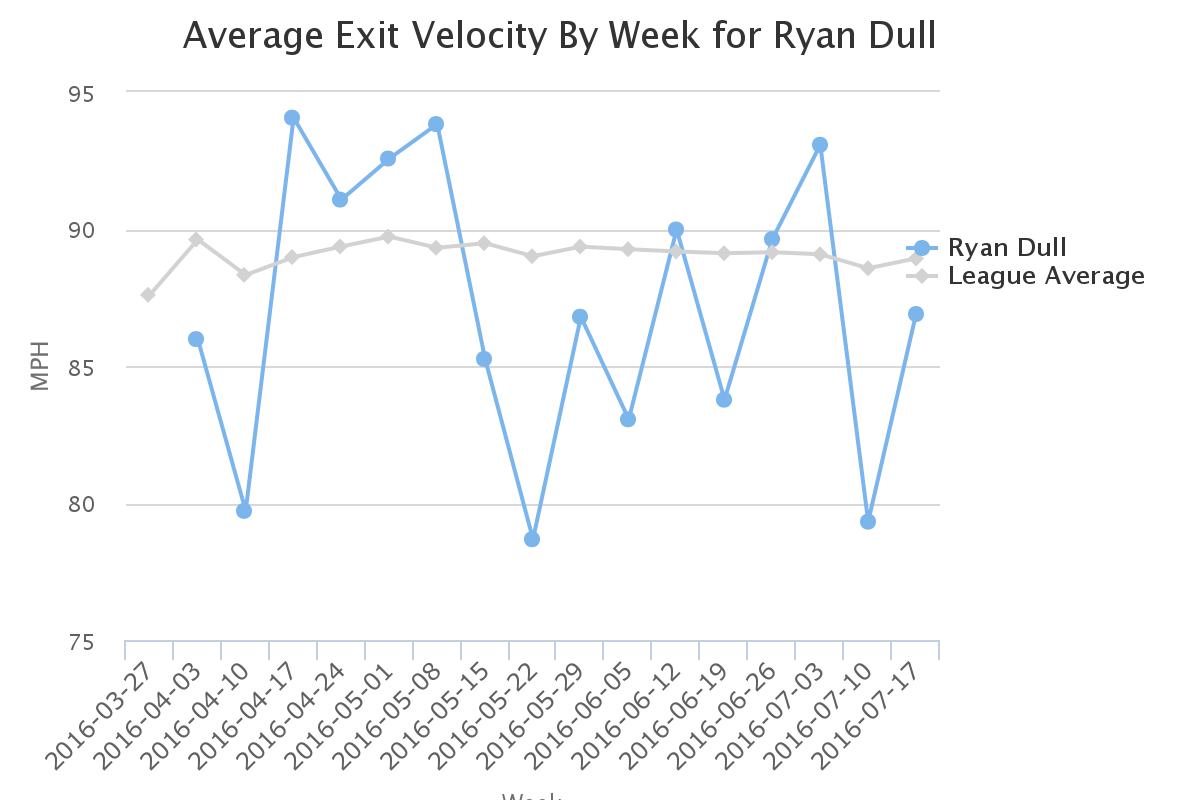 With incumbent closer Ryan Madson struggling in addition to being a potential trade candidate over the next month, there is a strong possibility that Dull finds his way into the ninth inning. At just 26 years-old and under the A’s control for the next few seasons, he’s unlikely to relinquish the role if he ever gets his hands on it, making him a prime target in dynasty formats.

"With my TDGX bench in tatters due to having four players on the DL (with only three DL slots available to use) and Michael Conforto still on his Vegas vacation at the time, I have been scrambling for warm bodies over the last few weeks to fill my last starting spot. Taylor will ride the bench for now, but he's somebody that I've long been a fan of and have owned in every dynasty league, along with Chris Owings (wish I was kidding about both players, really), that I've been in since he was drafted in the fifth round in 2012. The chance to reunite the two Chrises in TDGX was just too good to pass up. Well, that along with the fact that Taylor only cost $2.

A quick check of Taylor’s player page at BP lists Craig Goldstein’s boy Chase d’Arnaud as his number-one comp (with Brandon Crawford second), but if the former Virginia star can fill, at least partially, the utility role that Enrique Hernandez seem destined for at the beginning of the year by spotting the left-handed hitting Chase Utley and Corey Seager, in addition to giving Justin Turner the occasional day off (as he has done since his recall at the beginning of the month), then he has value in a league of TDGX’s size (600 major leaguers rostered). Speaking of Chase d’Arnaud, who, in addition to propelling Craig’s NL-only team to new heights this season, has also played with his band at Turner Field after a game this season, and is more appropriately known as the more productive d’Arnaud brother this season. What type of odds could you have gotten at the beginning of the season that Chase would be the better of the d’Arnaud brothers and Melvin would be the more productive of the Upton brothers? 1,000 to 1? 100,000 to 1? 10,000,000 to 1? I think this warrants further investigation." —J.J. Jansons

Detroit’s flamethrowing right-hander, who participated in the Futures Game last week, is perhaps the most electric relief prospect in baseball. Armed with a fastball that BP’s prospect team has routinely scouted at 96-100 mph, he’s racked up stunning numbers across two minor-league levels in 2016. In 35 1/3 innings, Jimenez has allowed just three runs (0.76 ERA) while posting a 59-to-12 K:BB ratio. Since a promotion to Double-A on May 27, the 21-year-old has allowed just 16 base runners and struck out 31 batters in just 18 innings. From a historical perspective, relief pitchers are extremely volatile dynasty assets. However, Jimenez has the stuff to make an impact at the major-league level, making him one of the safer investments at the position in recent seasons.

“For one measly dollar in July of a non-contending season, I'll happily buck the conventional wisdom that says I'm not supposed to pay for a relief prospect. It seems unlikely Jimenez will be asked to close in 2016, and he may not have an end-game role in 2017 either unless the Tigers move him at the deadline. The soft-tossing K-Rod has been effective yet again, and the Tigers have an affordable club option next season. Still, Jimenez has the kind of stuff that can pad strikeout totals and lower ratios in a setup role while I wait for him to ascend.” –Greg Wellemeyer

With 24 home runs in the bank, putting him among the minor-league leaders this season, Palka, who crushed 29 dingers in High-A last year, has seen his dynasty stock rise over the past few months. In nine games since a promotion to Triple-A Rochester earlier this month, the 24-year-old outfielder has continued to crush the ball, hitting three more home runs. If you’re going to speculate in a deep dynasty league, Palka is a widely available option that could pan out if he gets the strikeouts under control.

A 22-year-old right-hander acquired from Minnesota for Kevin Jepsen last summer, Hu delivered a strong performance in the Futures Game and has the stuff to serve as a potential mid-rotation starter in Tampa Bay, an organization currently teeming with those back-end type options at the major-league level. In 16 starts for Double-A Montgomery, Hu has posted a stellar 2.37 ERA with 72 strikeouts (7.1 K/9) and 26 walks (2.6 BB/9) over 91 innings of work. The Taiwan native doesn’t profile as a potential superstar, but in deeper dynasty leagues mid-rotation starters have legitimate value and need to be owned.