Gordon’s ownership has only shot up six percent in ESPN leagues since his inclusion in this space last week. He’s eligible to return in two weeks from his PED suspension, which means he can start playing in minor league games on July 18th. It’s pretty incredible to me that the no. 1-overall hitter from last season according to ESPN’s Player Rater is available in so many leagues, but if he’s available for free, you have to find a spot for him. If he’s available for 60 or 70 cents on the dollar in your league, I’d certainly be looking to buy.

Gregorius finished as the 14th-overall shortstop on ESPN’s Player Rater prior to the All-Star break, and the 26-year-old has increased his production in each month this season. Gregorius struggled out of the gate, hitting for a .597 OPS in April, but has continued to see his OPS rise; it climbed to .710 in May and .903 in June, and with three home runs in nine July games, his OPS sat at 1.087 prior to the break. It’s a bit troubling for owners in OBP leagues that Gregorius has seen his walk rate dip for the third straight year, as the former Cincinnati farmhand posted a 9.2 percent walk rate in his first full-season as a major leaguer with the Diamondbacks in 2013, and his walk rate this season in 83 games currently is a less-than-ideal 3.5 percent. However, while Gregorius’ value takes a minor hit in OBP leagues, he has certainly hit the ball with more authority this season, as his 11 home runs already signify a career-best total at any level as a professional, and his .171 isolated power would also be a full-season high. As the Yankee shortstop has seen his walk total dwindle as he gains experience, he also has trimmed his strikeout rate for the third straight season, checking in at 11 percent this season, which is the second best rate of any qualified shortstop. His five stolen bases this season don’t sound like much, but they’re good enough to place him in a tie for 11th at the position, and his .298 AVG currently places him in a tie for sixth overall with Jonathan Villar. Gregorius looks capable of providing top-10 production at shortstop over the rest of the season, and with the vastly improved contact rate that he’s displayed this season, he could be in the middle of a breakout. — J.J. Jansons

With the Fourth of July, Futures Game, All-Star break, and Pokemon Go taking over our lives in rapid succession over the past two weeks, you may have caught that poliwag at the beach, but missed McCarthy’s return to the Dodger rotation in the process. The 33-year-old veteran right-hander twirled five shutout innings while striking out eight in his debut against Colorado on July 3rd and followed it up by working six solid innings (three runs on three hits with six strikeouts) in a victory over San Diego last weekend. By cFIP, a predictive pitching metric, McCarthy (92) projects as an above average major-league starter moving forward and will provide a boost to fantasy owners rotations, even in shallow leagues, over the second half of the 2016 campaign.

From a fantasy perspective, targeting Leake is about as exciting as stumbling upon yet another zubat in Pokemon Go. The surface stats (4.83 ERA, 1.21 WHIP) through 18 starts with St. Louis are underwhelming, but Leake is also displaying the best control (1.4 BB/9) of his seven-year career and striking out more batters (6.2 K/9) than he has in any other season outside of 2014 (6.9 K/9). He won’t come close to replicating the .260 BABIP he posted a year ago that contributed to a 3.70 ERA, but given how good the skills have been, it’s reasonable to expect his ERA to come down in the second half. Especially if he continues to pitch like he did in his final start before the All-Star break when he fanned a season-high 10 batters over seven innings against Milwaukee. While the 28-year-old lacks the tantalizing upside fantasy owners crave, his consistency on a per-start basis and volume of innings has value. With very little upside remaining on mixed-league waiver wires, Leake’s stability is worth owning. –George Bissell

Last month, as Solarte was returning from injury, I touched on the offensive improvements he made last season, and he’s continued to hit the ball in the air more frequently (40.1 percent fly-ball rate) this season, which has led to eight home runs in 49 games and an isolated power of .220—far exceeding his previous best of .158 posted last season. Solarte’s hamstring kept him out of action for about a month earlier in the year, but since he’s returned to the lineup on May 21st, he’s provided quality production wherever he’s been deployed on the diamond, and his isolated power mark would place him inside the top-50 overall hitters if he had enough plate appearances to qualify, as would his .295 AVG. Solarte can provide help at a number of positions, and his production over the last 30 days places him as a top-16 option at either first base, second base, or third base, and if he continues to hit the ball in the air as frequently as he has to this point in the season, he should be able to continue his offensive gains over the rest of the year.

The Reds Opening Day starter has transitioned to the bullpen over concerns about his workload and the health of his right shoulder over the last month. Not only has the 26-year-old stayed healthy, but he has also thrived in relief, posting a 0.73 ERA with 14 strikeouts over 12 1/3 innings of work (six appearances). Widely available in deeper formats, Iglesias won’t accrue the innings necessary to make a huge fantasy impact, but that doesn’t mean fantasy owners should overlook the effect his stellar ratios and big-time strikeout totals in limited innings can have.

The 41-year-old knuckleballer survived an atrocious April (6.75 ERA over five starts) to post a 3.10 ERA, with a 61-to-29 K:BB ratio in 90 innings, over his final 14 starts leading up to the All-Star break. He finished off that run with an impressive stretch of outings in which he tossed seven strong innings against a trio of AL Central opponents (Indians, Royals, and Tigers). For the second consecutive season, an increase in the average velocity on Dickey’s knuckleball has served as the catalyst in his dramatic turnaround. 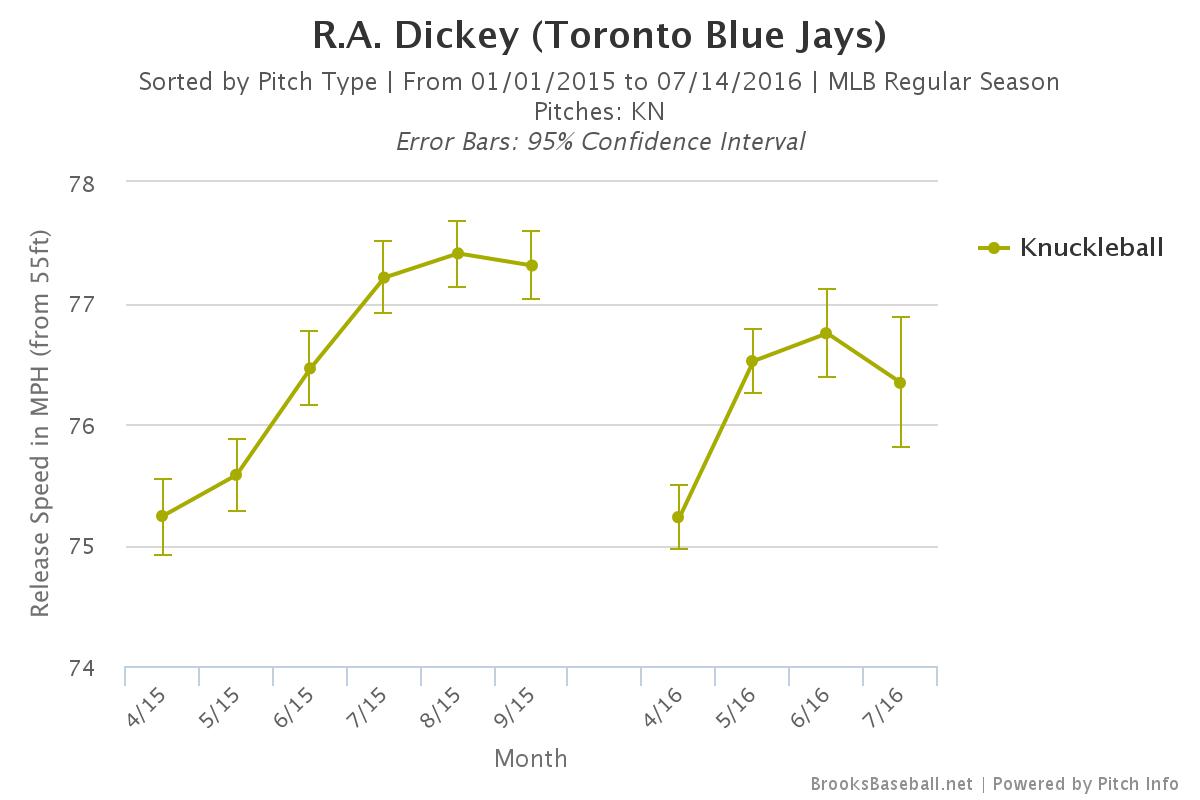 It’s no coincidence that Dickey was getting lit up in April when he was averaging just over 75 mph on his knuckler. He suffered from diminished velocity and his numbers took a similar hit early last season. Once the velocity rebounded in June (77.07 mph), his numbers improved dramatically. While Dickey is still not throwing as hard as he did in the second half of 2015, it’s an encouraging sign that the velocity is back up (76.58 mph) and while he won’t rack up gaudy strikeout totals, he can soak up a ton of innings and stabilize the back end of a fantasy rotation in deeper mixed leagues. –George Bissell

Aside from teammate Alex Bregman and potentially Andrew Benintendi (if the Red Sox elect to aggressively promote him directly to Boston later this summer) there isn’t a lot for fantasy owners to get excited about from the standpoint of likely second-half minor-league call-ups in AL-only formats. The lone arm that could make a tangible fantasy impact, if Houston decides to clear a rotation spot for him, is the 23-year-old right-hander. Musgrove started the Futures Game for Team USA, pitching a scoreless inning, earlier this week and has breezed through two minor-league levels, posting a 3.03 ERA with 71 strikeouts and just nine walks in 71 1/3 innings (14 appearances, 12 starts) between Double-A and Triple-A this season. –George Bissell

Matt Carpenter’s oblique injury, which could sideline him for a month (or longer), has caused the Cardinals to rearrange their infield yet again, with Kolten Wong settling back into his familiar second base role, and utility man Greg Garcia getting the starting nod in the Cardinals infield in four of five games prior to the All-Star break. After Carpenter’s injury, Mike Matheny penciled Garcia atop the Cardinal lineup in three of four games, and the former seventh-round pick in 2010 went 3-for-11 with three walks (and three runs scored) from the leadoff spot. The 26-year old hit for average at nearly every stop in the minors, and owns a career .281/.380/.390 line in 2576 plate appearances, to go with his .333/.467/.458 line in 90 major league plate appearances this season. If Garcia continues to hit atop the St. Louis order, he can provide plenty of help while Carpenter is sidelined, and he just might be the latest recipient of a little #CardinalDevilMagic. — J.J. Jansons

You need to be logged in to comment. Login or Subscribe
abskippers
12-team mixed 5x5 keeper league. Would you trade a $10 Castellanos and a $1 M. Fulmer for Sale & Solarte? It's a weekly league w/ playoffs starting in Sept, so if Fulmer hits an innings limit he becomes useless in the playoffs.
Reply to abskippers
GeorgeBissell
In a weekly format Sale is exponentially more valuable. I wouldn't think twice about doing this trade if you are in the playoffs.
Reply to GeorgeBissell