Brandon Belt has been a fantasy darling for years, ever since he hit .289/.360/.481 with 17 homers for the San Francisco Giants in 2013. Injuries and a lack of premium power, perhaps due to his home park, have kept him from being a top-end fantasy first baseman. That’s even true this season—Belt is only the 16th-ranked first baseman in ESPN leagues—but it’s impossible to ignore his impressive .301/.406/.523 slash line and wonder if his true fantasy value exceeds what the normal algorithms indicate.

That is to say, it’s possible that the 28-year-old’s ability to carry the batting-average category, while offering close to 100 runs and RBI, makes up for his non-elite power.

For this to be true, Belt would have to hit near .300 for the remainder of the season (and potentially beyond). Yes, his career .276 batting average illustrates that he’s a quality hitter at the big-league level, but such a batting average isn’t sufficient at first base without 25-plus homers. It’s simply a tough position to carry without light-tower power.

The Giants’ first baseman is interesting to me because he doesn’t profile as a high-average hitter in the same way as many speedsters, or even fellow first baseman Eric Hosmer. We often conceptualize high-average hitters as groundball-heavy hitters. That certainly is the case for Hosmer, who carries a 59.2 percent ground-ball rate. Contrast that to Brandon Belt’s 27.0 percent ground-ball rate. Their ultimate slash lines may resemble one another; however, it’s difficult to argue that they’re similar hitters.

It’s not just that Belt isn’t a ground-ball hitter. He takes it to the extreme. In fact, no other qualified major-league player puts the ball on the ground less often.

Belt sits atop some decent company. None of those players have a batting average under .281 this season. That intuitively makes some sense, too, as one would guess that these guys hit a myriad of line drives, which should increase one’s likelihood of having a higher batting average.

But I think it runs deeper than that for Belt. His 2014 season was injury-shortened, but it was also the first season the youngster began facing defensive shifts with regularity. He struggled, only hitting .222 against the shift that year. It’s difficult to separate the injury from the shift data, to be sure, but what’s not difficult to understand is that Belt began hitting the baseball on the ground less often in subsequent years.

Defensive shifts are designed to minimize one’s batting average on balls in play, so it’s important to recognize that Belt has seemingly worked to avoid that pitfall. What’s more is that he’s avoided the infield pop-ups, the non-ground-balls that are relatively worthless. His infield-fly rate was 0.8 percent a year ago and is 2.8 percent this year. Only Christian Yelich had fewer infield flies in 2015 (zero of them, in fact), but Yelich’s ground-ball rate is almost twice as high. That’s not nearly as impressive.

Belt generally pulls the baseball when it’s on the ground. That hypothetically helps him avoid infielders on line drives and the like. 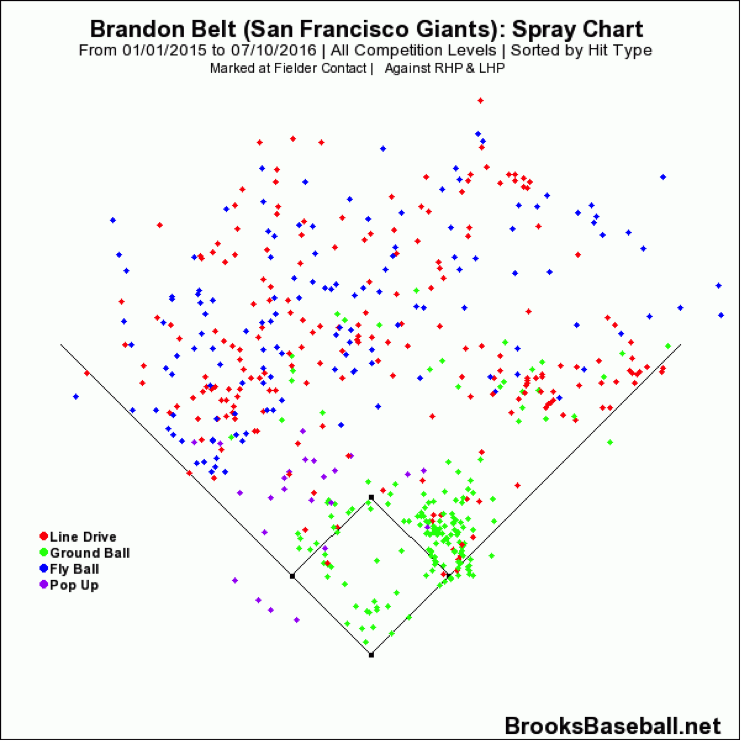 I believe that all of these things should help Brandon Belt continue to hit for a high batting average going forward. He has decreased his strikeout rate to 18.3 percent. He’s increased his walk rate to 14.7 percent. He’s hitting far fewer ground balls, which is helping him find more success against the traditional shift that some teams deploy against him. All of that is excellent.

The Giants’ first baseman still isn’t likely to hit for much power, but for fantasy owners looking for help in the batting-average category, as well as runs and RBI, he’s a fine trade target.

Provided that you’re not trolling the trade market for power, that is. My colleague Mike Gianella always comments how batting average is criminally overlooked in rotisserie leagues. Belt should be tremendous in those leagues. Even better in OBP leagues. And even better in points leagues. Yes, you ideally want your first basemen to hit for 25-plus homers per year; however, it’s important to be flexible enough to recognize when exceptions should be made—and that’s when a guy is producing everywhere else. And one shouldn’t forget that he swiped nine bags a year ago. He could offer a handful of steals, too.