Knuckleballers confuse the hell out of me. As far as I’m concerned, they may as well have strolled right out of Area 51 and onto the pitcher’s mound because I don’t know what to do with them. My strategy in the past—and by the past, I mean, when it has come to R.A. Dickey—has been to simply avoid knuckleballers because I don’t believe projection systems handle them very well.

Steven Wright owns a 2.18 ERA over 103 innings. He’s won eight games and pitches for one of the best offenses in Major League Baseball, if not the best one. He has a decent-enough strikeout rate at 19.9 percent. And, ultimately, he’s the 13th-ranked starting pitcher in ESPN fantasy leagues, which means it’s imprudent to simply ignore Wright because he’s difficult to project.

I mean, on one hand, I’m not sure how anyone hits Steven Wright’s knuckleball, as it does this:

But it doesn’t always shimmy its way across the plate. His catchers would have approximately 649 passed balls between them on the season and opposing hitters certainly wouldn’t be hitting .206. The right-hander would probably run away with the AL Cy Young award, as well. But that’s not real life.

Wright owns a 3.53 DRA, which suggests he’s been good but not nearly as good as his ERA would otherwise indicate. He also has a 93 cFIP, which projects him to be seven percent above average throughout the remainder of the season. That’s all well and good, but, again, I don’t have a ton of confidence that projection systems handle knuckleballers too well. I mean, R.A. Dickey had a 4.91 DRA in 2010 and didn’t post an ERA above 3.30 for three years.

Last year, I wrote about Marco Estrada and tried to explain why the right-hander vastly outperformed his FIP, and it stemmed from the fact that he induced a lot of contact on pitches outside the strike zone while missing a lot of bats in the strike zone. That logically seems desirable: Make hitters miss the strikes and hit the balls.

If we consider Steven Wright in the same way, we discover that opposing hitters make contact on 71.1 percent of pitches outside the zone and only 77.2 percent on pitches inside the zone—the latter of which is the best in Major League Baseball. In fact, it’s the lowest difference in the league. That’s not good by itself, as Jered Weaver ranks number two and is blatantly awful, but Wright has better stuff and isn’t getting hammered on pitches outside the zone like Weaver is (evidence here). 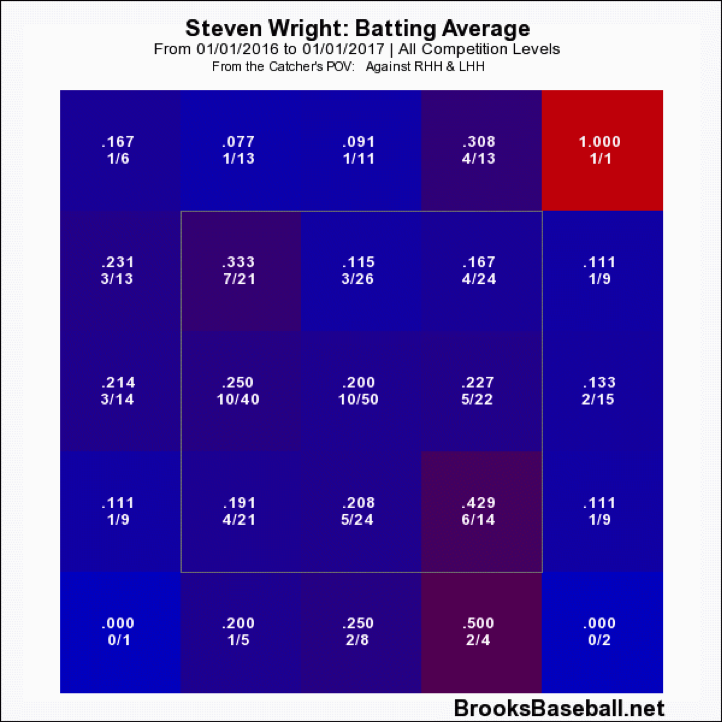 Almost all of Wright’s heatmap is some shade of blue. That makes sense given the opponent’s contact percentage on pitches in the zone and outside the zone and the quality of his knuckleball. It doesn’t really matter where he throws his pitch. On some level, it seems to just be bat-to-ball skill for the hitter if they try to swing, and the level of success across the board isn’t very high.

All of that should lead us to believe that Wright’s main path to success stems from throwing strikes. He’s had double-digit walk percentages throughout his professional career, coming to a head with a 15.3 percent walk rate in 2013 in his big-league debut. That has been reduced to single digits in the last three years, which has resulted in a 2.93 ERA over 196 2/3 innings over that time.

If Steven Wright throws strikes, he’ll find success. The problem, though, is that I don’t think it’s possible to prognosticate whether the right-hander will continue to throw strikes. How much does a knuckleballer really control the pitch or command the strike zone? How much of it is throwing and hoping? I’m not sure, obviously, but it seems to be an open question that has led to a highly variable walk rate throughout his professional career.

Despite that, I’m beginning to buy into Wright’s fantasy potential this year. Boston’s offense should afford him ample “win” opportunities. His knuckleball probably won’t get beaten around if he is in the strike zone. One would think that he’s less injury prone due to his repertoire, too. The only thing that will kill him is if he suddenly cannot find the strike zone to save his life.

And what the hell. Maybe I’m game to take that chance.

It’s still unclear what Wright’s fantasy value is. Most fantasy owners are probably treating him as an early-season novelty, just reaping the benefits before he hypothetically turns back into a pumpkin. That should make his price tag reasonable. For now. And for those who are in one of the 20 percent of leagues in which Steven Wright is on the waiver wire, take the plunge into the unknown and pick him up. Now.

You need to be logged in to comment. Login or Subscribe
jfranco77
Interesting that his heat map seems to bely the "if it's high, let it fly, if it's low, let it go" mantra. At least sort of.
Reply to jfranco77