As of Mike Gianella’s most recent valuation update a couple of weeks ago, Abreu was on pace for merely a $12 AL-only season–good for just 15th among first-base-eligible hitters in the junior circuit. He’s since rebounded with his first sustained hot streak of the season across his last dozen games, dropping a .370/.396/.630 line with three dingers and 18 R+RBI to take some of that early-season sting out of it for mixed leaguers who, on average, bough him 21st overall in mixed NFBC drafts. Still, he remains well below his level of expected production in the macro sense, and we’re deep enough into the season that we need to be asking ourselves with straight faces whether recent hot streaks like Abreu’s are in fact sustainable turn-arounds, or whether they’re temporary beacons among more troubled seas. So let’s dive under the hood and figure out what went wrong early, why it’s not going wrong now, and whether it’s likely to go wrong again over the next three and a half months.

Let’s start with the basics: Abreu’s BABIP is down, sitting at present at a nominally-above-league-average mark of .299 that is well south of the .356 and .333 marks he posted across his first two campaigns. And sure enough, he’s hitting less line drives than he ever has while seeing a boost in his fly ball contact. It hasn’t been better fly ball contact, however, and courtesy of Statcast we can see that he’s hitting the ball with less authority overall this year: 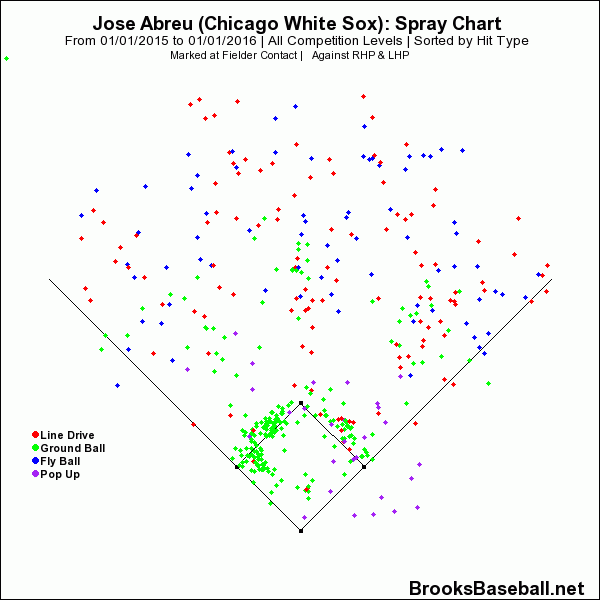 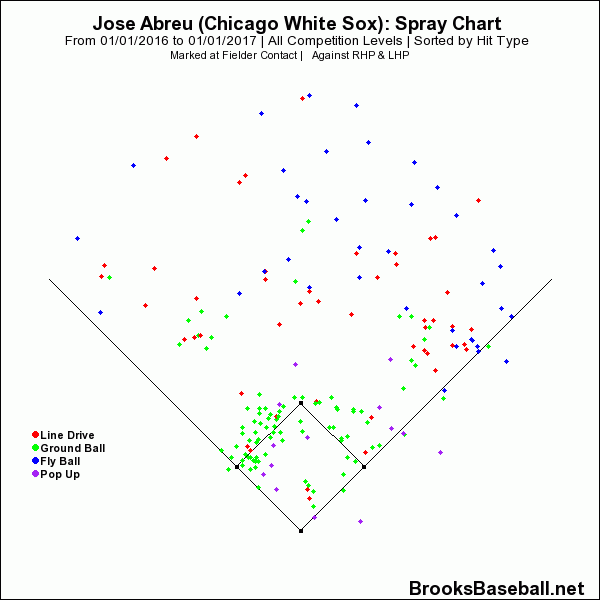 Abreu has been an all-fields hitter since his debut, and he’s still driving the ball to center field like he does. That’s an especially encouraging sign given his profile. But the pull-side fly ball contact – the kind that tends to go farther and produce more damage – is M.I.A. this year. It’s gone in favor of significantly more can-of-corn contact to the opposite field – the kind that’s more consistent with sawed-off balls that lack carry. And after hitting 11 home runs to right-center or right last year (and eight the year prior), he’s left the yard oppo just once this season.

Digging in to the sequencing data a bit, there appears to be a pretty straight-forward reason for this, and one that conveniently fits the narrative we’re starting to build: he is indeed getting sawed off by inside pitches more often. After coming in off the plate with 27.9 percent of pitches last year, hurlers this year are attacking more often in his kitchen at a 32.3 percent clip, and the bulk of that jump is coming up on the hands, where he’s hitting .115 and posting his worst exit velocity of any of the 13 regions in and around the strike zone that Statcast tracks.

That hasn’t really changed all that much over the past couple weeks of his post-Mike’s-update heater, either. Abreu has been expanding his strike zone at a rate comparable to the rest of his season (and career, for that matter) to date, and his fly ball contact has continued to wind up pretty much anywhere except his pull side. He’s offered at balls in off the plate at a slightly lower rate, however, and his overall exit velocity has jumped up by about three full miles-per-hour. We’re dealing with extremely small swaths of data here, but that’s a significant improvement: for perspective, the 94.8 average he’s been rocking in that span is on par with where the Stantons and the Cruz’s typically reside at the top of the pile of season-long numbers. Tiny samples of random variance are what they are, but this is not bad news.

There is, in other words, nothing definitive to be gleaned from this small a window, but – but! – the better results of late are indeed the product of better contact. And any time a hitter with Abreu’s track record and noted intelligence starts to find that kind of production on the back end of adjustment-induced struggles it is noteworthy. It suggests potential counter-adjustment in progress. I’m bullish, and if you can find an owner in your re-draft who was soured by his early-season sag I’d advise pouncing quickly before it’s too late.