CC Sabathia has been forced to do all of that. He’s gone from Cy Young candidate to below-replacement pitcher. He’s checked himself into rehab and handled the P.R. ramifications of such a public choice. He’s listened to his body—more directly, his decreased velocity—and introduced a cutter into his repertoire to cope with it.

In short, CC Sabathia is a professional pitcher in the true sense of the word, a guy who works at his craft and takes meaningful steps to remain successful. Some things have worked more than others. But in the last 30 days, Sabathia has been the second-best starter in Major League Baseball.

That’s quite some company surrounding Sabathia—four front-line starters… and the Yankees’ lefty.

Which begs the question: Is CC Sabathia fixed? Has he discovered an avenue toward sustained success with this cutter?

The analysis on Sabathia has been a little forced, in my mind, as it tends to treat the southpaw’s end-of-season performance—in which he twirled a 2.86 ERA over his last nine starts—as comparable to his 2016 performance. Perhaps it makes chronological sense; however, if we’re looking at his new cutter as the lynchpin to his newly sustainable success, the last nine starts of 2015 become irrelevant because he didn’t throw the cutter. I’m only interested in what Sabathia has done this year, with that new cutter, ostensibly with a new approach.

Even then, the narrative has been a bit misleading. The 35-year-old owns a sparkling 2.28 ERA over 59 1/3 innings, which would rank as Major League Baseball’s 10th-best ERA among starting pitchers, if he had enough innings to qualify. But, in April, he looked like an over-the-hill pitcher who was poised to lose his spot in the rotation. Sabathia had compiled a 5.06 ERA with just a 15.2 percent strikeout rate and an 11.1 percent walk rate—all with his new cutter.

So really what we’re talking about is his last six-game stretch, in which he’s been phenomenal. He has only allowed three earned runs in his last 38 innings, good for an 0.71 ERA, and he’s holding hitters to a .176/.265/.221 slash line. It’s a stretch of performance that has been so utterly dominant that it has effectively made his early-season disaster look like a mere speed bump on a newly-paved road.

His cutter hasn’t been a magical pitch for him in 2016. He actually struggled with it in the month of April, as opposing teams hit .290 against the pitch, admittedly with a .375 BABIP and a low .097 ISO. Still, it wasn’t handcuffing right-handers like it was supposed to. 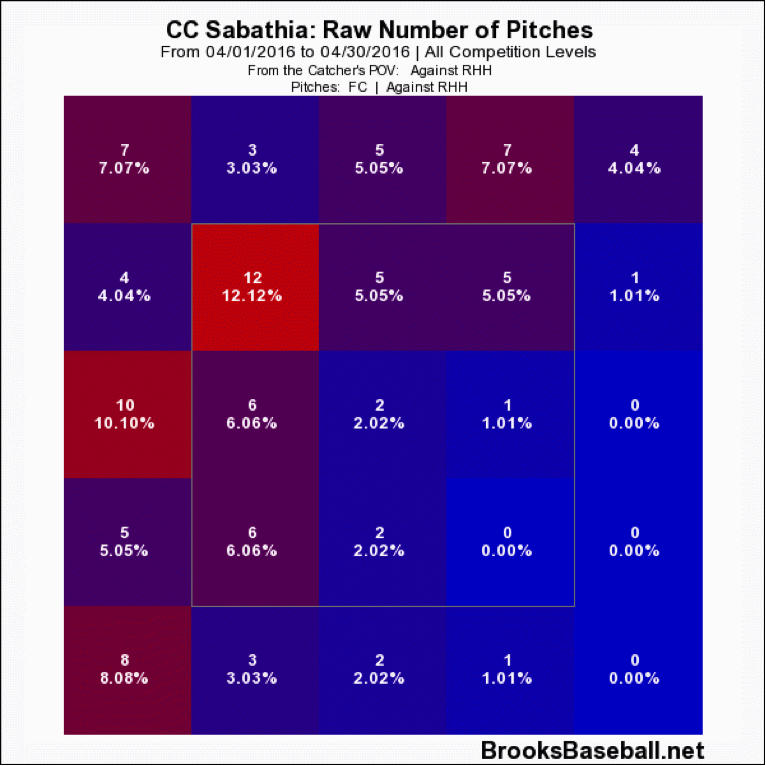 It’s no secret as to what Sabathia was trying to do with his cutter to neutralize righties. He tried to pound them on the extreme inner half, often working it up in the zone to make it very difficult to handle. It’s something that Jimmy Nelson has been doing with his fastball to lefties, for example, so it’s not an uncommon approach.

One could argue that his cutter vastly improved since the month of May. Opposing teams are only hitting .159 with a paltry .023 ISO against the pitch, something that’s helped by an unsustainable .200 BABIP. When it comes to location, though, nothing really changed. Sabathia is still doing the same thing with the pitch, just suddenly getting very different results. 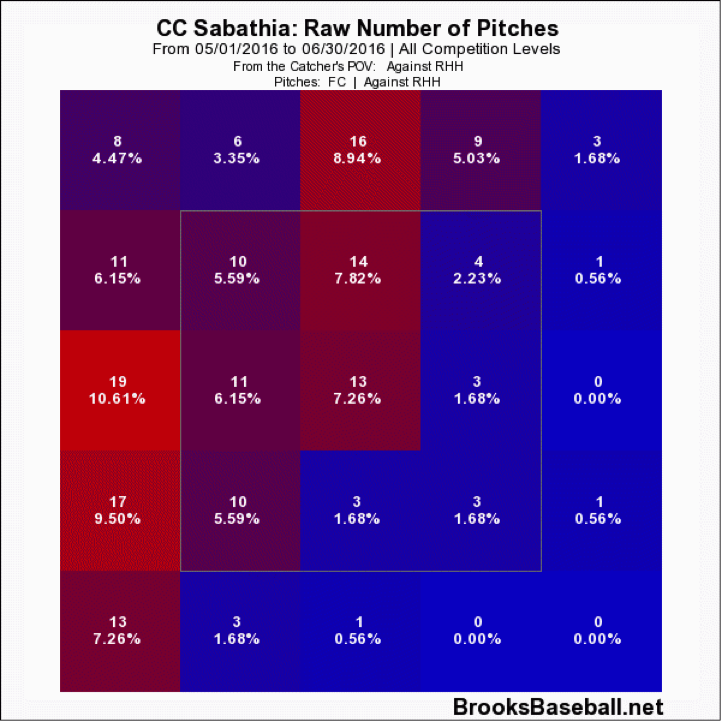 I don’t see too much evidence to defend any argument that suggests Sabathia is finally improving because he’s locating it better. It’s about the same. Maybe he’s finding the middle of the zone a bit more or working it down-and-in with a bit more frequency, but it doesn’t seem to be anything too groundbreaking. The plan of attack remains the same.

What Sabathia’s recent run of success stems from is actually pretty simple, though, it seems. It’s simply a matter of throwing more strikes to get ahead in the count on the first pitch.

Most of the increase comes from his fastball and cutter, but he’s also throwing more first-pitch strikes with his slider. All of that allows Sabathia to work ahead in the count and enables him to utilize his offspeed pitches more often. It’s why opposing teams are only hitting .095 against his change since the beginning of May and only .136 against his slider. Hell, he’s even mixing in a curveball in recent starts and opposing teams haven’t managed a hit on any of the 23 curveballs he’s thrown.

Part of this story is unavoidably a BABIP story. He had a .234 BABIP in May and has a .219 BABIP in June. Those numbers are light years away from his career .294 BABIP. So, yes, regression will come about. But Sabathia really is doing something different. He’s throwing more strikes early in the count. It’s helped him immensely, probably more than his cutter has.

Hitters will adjust back. They’ll start swinging more, and when they do, Sabathia will have to adjust to the fact that he’s not regularly working ahead in the count. Maybe he’ll throw more 0-0 breaking balls or cutters. But I don’t see too much different in what he’s doing now as opposed to what he was doing in April when he was getting shelled—well, other than working ahead more regularly and benefiting from a friendly BABIP.

So, no, I don’t think the cutter has revitalized Sabathia. It’s given him a useful tool, no doubt, but what’s really catapulted himself forward is that he stopped walking guys, like he did in April, and started putting himself in the driver’s seat once the opposition became more passive (expecting him to throw as many balls as he did early in the year). They’ll adjust back. When they do, what does Sabathia have left in the tank? I’m not sure it’s much. And if it’s not, he’s probably not a worthwhile starter in most fantasy leagues, as we’ve seen the past couple of years.

Not that I think Sabathia has huge trade value at the moment. For those who believe his cutter is the reason why he’s suddenly lighting the world on fire, though, he could fetch a small piece or two. It’s probably best to do that now before the league catches up to the 35-year-old lefty. Because there’s a great chance that they will, and when they do, you’re not going to want him anywhere near your fantasy rotation.

You need to be logged in to comment. Login or Subscribe
jfranco77
I don't know how he's doing it either, but those 6 starts were @BAL, @OAK, TOR, @TOR, @BAL and vs DET.

Sure, some of those offenses have been scuffling, but he's somehow done it against some (theoretically) good lineups.
Reply to jfranco77