After being sidelined with a thumb injury that had kept him out of action since spring training, Peralta returned to the Cardinals lineup on Tuesday, hitting fifth in the order and earning the start at third base, as he has in his first two games back. With Kolten Wong’s demotion to Triple-A Memphis, the Cardinal infield will likely feature Peralta at third, Matt Carpenter at second, and Aledmys Diaz at shortstop on a regular basis. If Peralta is playing every day—and all indications are that he will be at either short or third—he’s certainly worth rostering in standard mixed leagues.

With Peralta likely being out of mind for many fantasy owners to start the year, it should probably be pointed out as a reminder that he was a top-12 shortstop on ESPN’s Player Rater in 2015, when he hit for a .275 AVG and 17 home runs. In fantasy czar Bret Sayre’s updated rest-of-season shortstop rankings (which were released a few weeks ago), Peralta was pegged as the 18th-most-valuable shortstop, and I’d argue based upon his career track record and placement within the Cardinal batting order upon his return, that he’s as likely to provide value in the top-10 range over the rest of the year as several options that appear ahead of him on Bret’s list, including Troy Tulowitzki (no. 8) and Addison Russell (no. 10). If Peralta can hit in the .260-.270 range (as he did in his first two years as a Cardinal), and provide 8-10 home runs over the rest of the season, that’s likely to be better production than many of the young shortstops that could be called up over the next few weeks. –J.J. Jansons

It’s hard to believe that Bauer is only 25 years old. It may have something to do with the fact that he’s served as a lightning rod among baseball analysts (and fantasy owners alike) dating back to his collegiate days with rotation mate Gerrit Cole at UCLA. Reports regarding Bauer’s dedication to studying and perfecting his craft make you wonder if he’s already forgotten more about pitching than many of us will learn in a lifetime. Yet, the surface stats remained lackluster (4.50 ERA in 64 career starts) over the past four years.

Following a brief stint as a reliever to open up the 2016 campaign, Bauer appears to be turning the proverbial corner ever since rejoining the Indians rotation in late April. In eight starts since, he owns a 3.67 ERA with a 43-to-17 K:BB ratio over 49 innings and has yet to allow more than four runs in a single outing. His control (3.3 BB/9) remains an issue, but he’s generating more ground balls (48 percent) and striking out nearly a batter per inning (8.5 K/9). A career-best 99 cFIP, a predictive pitching metric, is another positive indicator. With a matchup on the road against the struggling Angels on tap this weekend, Bauer is a prime streaming candidate and rapidly evolving into a back-end of a fantasy rotation anchor in shallow mixed leagues.

Will Harris, RP, Houston Astros (Available in 74% of ESPN.com leagues)

Glowing relief pitcher endorsements aren’t the prototypical lynchpins of the BP Free Agent Watch column, mainly because they have an entire weekly column (The Closer Report, authored by the excellent Matt Collins, I might add) dedicated to them. But also because they’re fungible fantasy assets prone to dramatic shifts in value given the relationship between their performance and job security. However, Harris, who owns a sparkling 0.33 ERA while striking out over a batter-per-inning over 27 appearances this season, is still widely available and a worthwhile free agent target. The well-traveled 31-year-old isn’t a one-time fluke. He was excellent in Houston last season, posting a 1.90 ERA, the ninth-lowest mark of any reliever with at least 50 innings of work, across 71 innings last year.

Once Astros announced they were transitioning to a committee approach over the weekend, it was only a matter of time before he got an opportunity. Houston has encountered a pair of save situations since then and each time they’ve elected to hand the ball to Harris. Even manager A.J. Hinch has implored fantasy owners to pick him up. There’s always a chance that Luke Gregerson or Ken Giles work their way back into the ninth inning, but Harris is the real deal and a worthy investment, even in shallow free agent pools. –George Bissell

After being relegated to the bench in Seattle for most of the first month of the season and receiving only 27 plate appearances (most of which came as a pinch-hitter), Lee has found his name on Scott Servais’ lineup card much more frequently over the last month, receiving 53 plate appearances in May. He’s on pace to far exceed that number in June, as he’s already started six times and came to the plate 24 times. Lee made the most of his extended playing time in May, hitting for a .260 AVG and knocking in 13 runs, but his power potential is his allure, as one would hope with a first baseman. Lee smacked five home runs in May, and his total of eight on the year in just 98 at-bats places his AB/HR ratio of 12.3 ahead of Nolan Arenado’s 12.5 and just behind David Ortiz’s 12.2 mark for seventh overall in the majors.

Lee started the year as a likely platoon partner with righty-mashing Adam Lind (and his Appreciation Society) at first base, but he’s clubbed right-handed pitching at a .326/.370/.605 clip (with four of his eight home runs) over his first 46 plate appearances, which should continue to earn him more opportunities at first base with Lind sliding to designated hitter against right-handed pitching, as has been the case of late. Lee’s isolated power mark of .245 places him eighth among first basemen (min. 100 PA), just behind the Cardinal below.

Adams went on a tear in May, hitting for a .364/.411/.652 line with four home runs in 73 plate appearances that put him back on both fantasy owners’ collective radar and, more importantly, back on Mike Matheny’s. The Cardinals manager still isn’t penciling Adams’ name in the lineup against left-handed pitching this season, although he has shown improvement (.385 AVG with one of his eight home runs) against them in a tiny 27-plate-appearance sample. Adams has carried over his quality production from May into June, swatting two home runs and hitting for a .429 AVG in the first six games of the month, and it looks like he’s held off Brandon Moss as the regular first baseman against right-handed pitching in St. Louis—a situation that was very fluid over the first month of the season. Adams’ power, which largely disappeared last season, as his .137 ISO (his lowest at any level as a professional) indicates, has returned in 2016, as he’s mashed eight home runs in just 145 plate appearances on the year, bringing his isolated power mark to .250 this season, seventh at the position, and his .333 AVG and .970 OPS is tops among all first basemen who have received 100 plate appearances.

Adams has raised his line-drive rate by almost three percent this season from his 2015 rate of 20.1 percent, and he’s lowered his ground-ball rate by four percentage points this season as well. His HR/FB rate of 20 percent is double that of his 2014-15 output, but Adams is flashing the same type of pop this season as he did in his 2013 breakout campaign, when his HR/FB rate was 21.8 percent, so he’s shown the ability before to turn his fly-balls into this type of over-the-fence production before.

As long as Big City continues to see the lion’s share of time at first base against right-handed pitching, he’s somebody you want to roster in deeper leagues, even when his .383 BABIP starts to creep closer to his career .333 mark.

In two starts since being recalled from Triple-A Tacoma earlier this month, the 27-year-old southpaw has allowed 11 runs (four earned) on 15 hits while striking out 17 batters and issuing just two walks in 9 2/3 innings. The surface stats (3.72 ERA, 1.76 WHIP) are extreme enough to scare away the casual fantasy owner, but it’s the dramatic changes in Paxton’s profile, most notably a massive uptick in average fastball velocity, that are worth taking notice of. 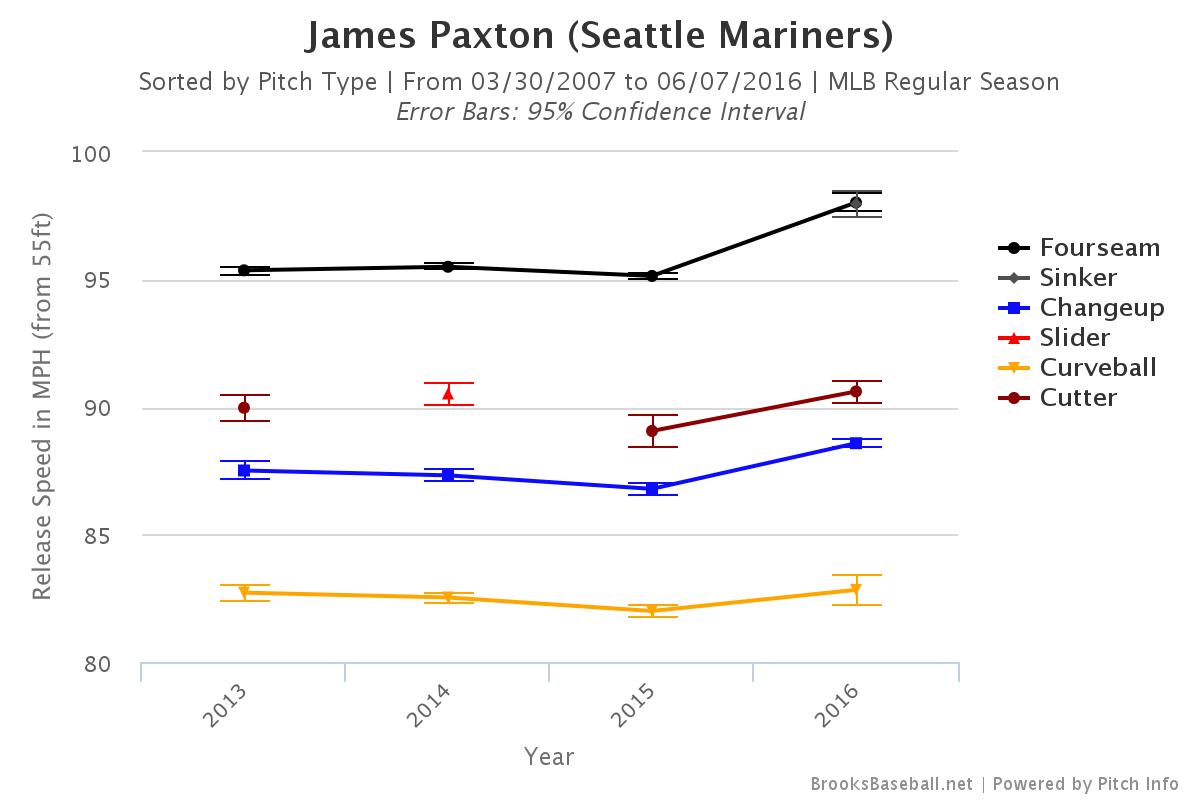 Per BP’s PITCHf/x Leaderboards, Paxton’s 98.66 mph average fastball velocity is the highest of any left-handed major-league starter this season by a considerable margin. In addition to the increased velocity, his four-seam is also generating more swings (and whiffs on those cuts) than in previous years, which bodes well for his strikeout totals moving forward. While he won’t sustain a preposterously high strikeout rate (15.8 K/9) all season, he did rack up 50 punchouts in 47 2/3 innings at Tacoma earlier this year. Given his lengthy injury history, it’s difficult to peg Paxton as a burgeoning fantasy ace, but the colossal strikeout totals are hard to ignore in deeper mixed leagues. He’s someone fantasy owners need to have on their radar. –George Bissell

Ichiro Suzuki, OF, Miami Marlins (Available in 98% of ESPN.com leagues)

The 42-year-old has walked twice as many times (10) as he’s struck out (five) and is hitting .330/.387/.376 with 15 runs scored, seven RBI and six stolen bases in 42 games this season. With fewer than 30 hits to go in his quest for 3,000 major-league hits, the senior circuit’s elder statesman (who hit a career-worst .229 last year) is enjoying a remarkable renaissance campaign. The stolen bases and his perch atop the Marlins lineup have value, even if he’s not garnering everyday at-bats.

Originally inked to serve as Boston’s platoon option versus southpaws to complement starter Brock Holt, Young has been pressed into everyday at-bats after Holt went on the disabled list with a concussion and his subsequent replacement, Blake Swihart, suffered a serious ankle injury last week. The 32–year-old homered off Madison Bumgarner earlier this week, and is now hitting .310/.383/.619 with 11 runs scored, five homers, 12 RBI, and a pair of stolen bases this year. With no immediate threat to his newfound status as the Red Sox everyday left fielder present, AL-only fantasy owners can safely target Young as a solid source of productive plate appearances moving forward. –George Bissell