In the Week Eight edition of The Free Agent Watch, I recommended Duvall in the 15-team mixed portion, and all he’s done since then is make me regret not putting him in this space earlier. Prior to Thursday’s games, only five hitters in all of baseball owned a higher AB:HR ratio than Duvall’s 12.6 percent. Those five players? Yoenis Cespedes, Todd Frazier, David Ortiz, Bryce Harper and Nolan Arenado. That’s it, that’s the list. Duvall’s power–which I pegged for 20-25 home runs prior to the season if he received regular playing time–is starting to look like it could be in excess of 30, as he’s already hit 14 in the team’s first 54 games, and his .317 isolated power mark places him second among qualified outfielders directly ahead of Harper and behind only Cespedes. Duvall’s 25.5 percent HR:FB ratio is down from the 27.8 percent he posted in 72 plate appearances last season, and if he continues to make enough loud contact–his 38.1 percent hard-hit percentage is 14th among outfielders–he should continue to see plenty of his flyballs (which he hits at a 45.1 percent clip) leave the yard.

Duvall’s .289 OBP knocks his value down in on-base leagues, without question, but he can supply more than enough power to make a difference in standard mixed leagues. Khris Davis finished 2015 as a top-50 outfielder on ESPN’s Player Rater behind a .247 AVG that included 27 HR and 66 RBI (with six steals of added value), and I think Duvall is capable of meeting or exceeding all of Davis’ totals from last season. Two weeks ago, I mentioned that it looked like Duvall, who played a lot of third base in the minors, likely wouldn’t see much action there with Eugenio Suarez firmly entrenched as the team’s starting third baseman, but over the last week, Duvall has made one start at third base and appeared in another game there when Suarez was moved to shortstop. If Duvall can attain third-base eligibility, that just makes him an even more enticing option in standard mixed redraft leagues, as well as long-term leagues. –J.J. Jansons

The 29-year-old is quickly becoming one of the most intriguing pitchers to watch this season. Not only has he gone seven innings in each of his last three starts, he’s allowed just four runs despite 20 hits and owns a 31-to-0 strikeout-to-walk ratio during that span. Shoemaker’s surprising surge coincides with a dramatic increase in splitters. He’s thrown the pitch more (38.30 percent) in the last month than any other in his career. 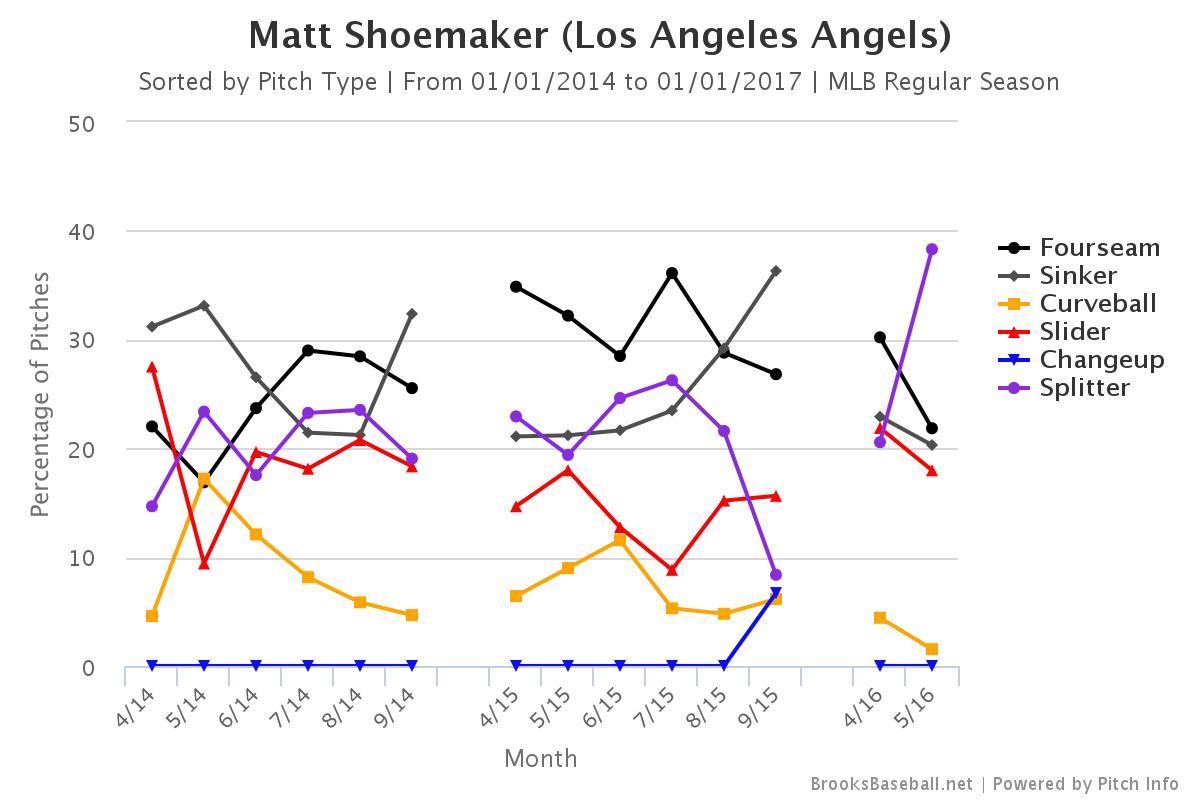 The ugly surface stats (3-6 record, 5.50 ERA, and 1.43 WHIP) will scare away most prospective fantasy owners, but if he continues to throw his splitter and it remains a legitimate weapon, he’s going to be a relevant mixed-league option over the remainder of the season. The time to buy in is right now.

After firing six shutout innings against a loaded Cubs offense earlier this week, there’s little doubt that Kazmir should be owned in all leagues (even shallow formats) going forward. After a rocky start (5.32 ERA through nine starts), the 32-year-old left-hander has allowed just one run on five hits while striking out 19 batters over 12 innings in his last two outings. The most noteworthy development from a fantasy standpoint is the uptick in strikeouts (9.5 K/9 up significantly from 7.6 K/9 last year). According to BP’s PITCHf/x leaderboards, Kazmir’s slider ranks among the deadliest swing-and-miss offerings of any southpaw starter this season. 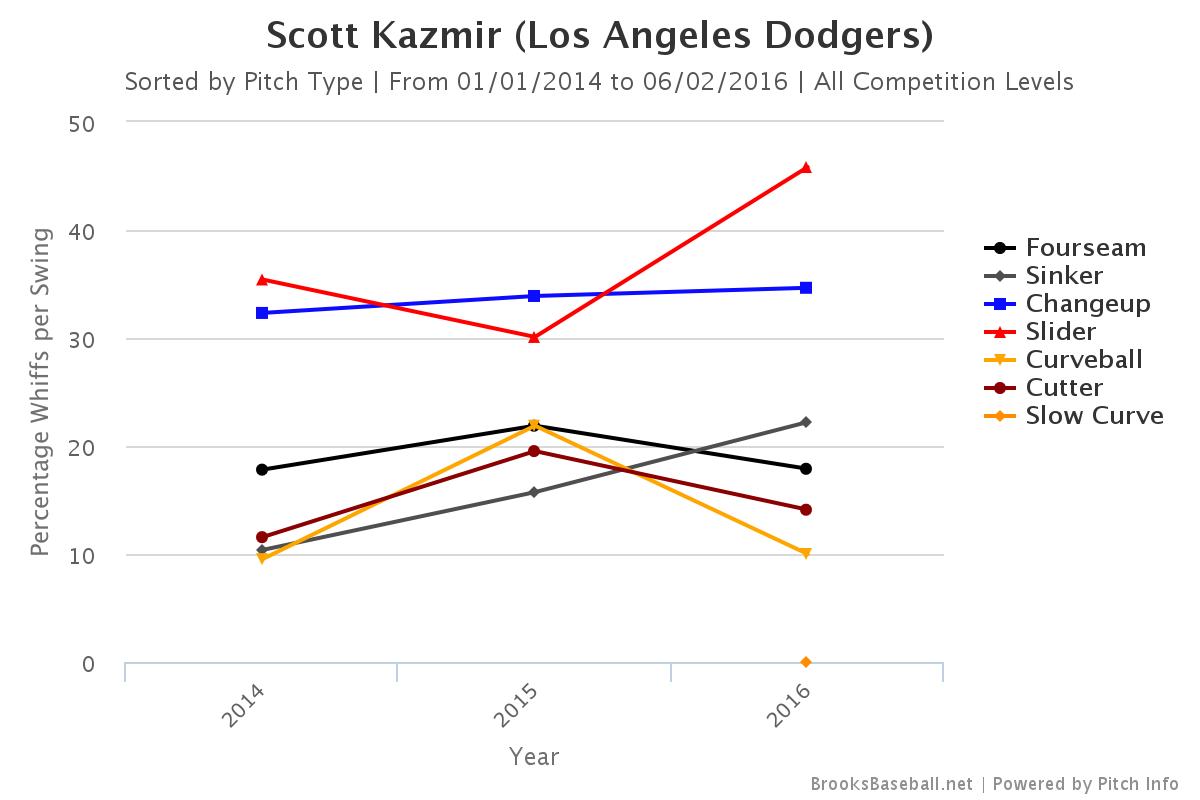 With his next start coming against the lowly Atlanta offense, which ranks dead last in runs scored this season, time is running out to grab Kazmir off the wavier wire in 12-team leagues. –George Bissell

Solarte, who turns 29 next month, made numerous improvements to his offensive profile in his second full season in the majors last year, including bumping up his slugging percentage by a cool 59 points from the .369 SLG mark he posted as a rookie in 2014. Solarte’s tender hamstring finally allowed him to return to the lineup on May 21st, and he’s mashed his way to a .333/.419/.611 line with three home runs in his first 62 plate appearances of the year. Obviously it’s far too early to draw conclusions about Solarte’s possible improvements this year, but he’s continued to hit the ball in the air more frequently this year (35 percent in 2014, 37 percent in 2015, 45.2 percent this year) and his hard-contact percentage–which he raised by 4.5 percentage points over his rookie season in 2015–is up from his first two years as well. If these two trends continue, he’s a solid bet to raise his slugging percentage again this season. Solarte has started five times at second base this season along with his nine starts at third base, and his .428 SLG in 2015 quietly placed him in a tie with Ian Kinsler for eighth among second basemen, and his 14 home runs were good for a tie for eighth with Daniel Murphy. If Solarte continues to show improvement in his third season–as he has in his first two–he could provide production worthy of a top-10 second baseman over the rest of the season.

After having a nice view on the bench of Joey Rickard’s exploits and receiving only 17 plate appearances over the first month-plus of the season, Kim found his way into Buck Showalter’s heart and onto his lineup card much more frequently in lieu of Rickard in May. Kim made 10 starts in May, and posted a .257/.366/.400 line in 41 plate appearances. Kim’s .366 OBP for the month was far higher than each of Rickard’s first two months (.303 in April, .313 in May), and earned him six starts while hitting from the two-hole in the Oriole lineup. Hitting between Adam Jones and Manny Machado is a nice place to be when you’re running a seasonal .382/.469/.509 line, and if the 28-year old Kim can provide anywhere close to the power that he did while hitting in the KBO (he averaged 20 home runs there over the last three seasons), he makes for an intriguing option–particularly in OBP leagues–over the final four months of the year.

Ranked no. 202 in BP’s recently updated Top 300, Wood’s fantasy stock has experienced a precipitous decline since it was announced he would be shut down for at least the next month after being diagnosed with a posterior impingement earlier this week. It’s an unfortunate setback, which will likely keep him out until after the All-Star break in mid-July, but for fantasy owners in deeper leagues (where he may have been cut by another owner) Wood is a prime waiver-wire target to stash on a contending roster for the stretch run.

As MLB.com’s Mike Petriello wrote earlier this month, a recent mechanical adjustment has enabled Wood to tighten his release point and increase his strikeout rate to a career-high 9.9 per nine innings though 10 starts this season. If you have roster space and the patience, Wood’s mammoth strikeout rate alone is enough to make him an excellent stash.

I highlighted the 35-year-old’s transition away from his four-seam fastball, to a steady diet of cutters and sinkers, in my TDGX Transactions column earlier this week. The results (2.85 ERA through eight starts) have been extremely encouraging so far. Over his last three starts (including a pair versus the high-powered Blue Jays offense), Sabathia has allowed just three runs on 10 hits with an 18-to-3 strikeout-to-walk ratio over 18 innings of work. He’ll face another stiff test against Baltimore over the weekend, but in deeper formats, the veteran lefty has done enough since coming off the disabled list to be worthy of a roster spot. –George Bissell

With the middle-infield landscape resembling a post-apocalyptic wasteland, Merrifield, who has hit .360 with 11 runs scored, four RBI, and a pair of stolen bases in just 12 games, resembles a welcome oasis for AL-only owners. Given the severity of the Royals injury issues, the 27-year-old could potentially carve out a significant role as a super-utility infielder or take over at the keystone full time in place of Omar Infante. Regardless of where the playing time comes from, he’s a relevant option for AL-only owners right now. –George Bissell

Hunter Pence’s strained right hamstring, which landed him on the 15-day disabled list, has opened the door for regular playing time in the San Francisco outfield for Parker, the 74th-overall pick in 2010. Parker’s only received 29 plate appearances in the majors this season, but the 27-year-old was absolutely demolishing Pacific Coast League pitching this season, hitting 13 home runs in 36 games and mashing his way to a .274/.359/.607 line in 153 plate appearances. Parker showed good pop–six home runs in 21 games–in his callup last season, which came on the heels of hitting 23 homers in 124 PCL games. Parker also stole 20 bases last season along with those 23 long balls, and he’s reached double-digit steal totals in each year of his minor-league career prior to this one. If Parker impresses in Pence’s absence, it’s not hard to envision him working his way into a larger role in left field ahead of Gregor Blanco. — J.J. Jansons

You need to be logged in to comment. Login or Subscribe
earlweaver
In AL-Only, is Jefry Marte worth a look?...Mike S had him batting 5th, plus Pennington is out so Escobar might scoot over to short...Nobody else is really available for me except J Uribe (I'm at the Soviet Safeway).
Reply to earlweaver
jansonsjj
In AL-only he's probably worthy of a look, but I'd rather have Merrifield if he's available, and probably Uribe too. I actually kind of like Marte's bat, but I have major questions about his ability to play 3B defensively, and he's not going to play 1B/DH.
Reply to jansonsjj