Welcome back to the latest installment of TDGX Transactions, BP’s weekly series providing fantasy owners with an inside look at The Dynasty Guru Experts League (TDGX), a 20-team (40-man roster) 5×5 rotisserie dynasty league. It is the literal embodiment of the phrase “deep dynasty.” It’s also populated by some of the most talented fantasy baseball analysts and competitors on the planet. In addition to taking an in-depth look at each week’s TDGX free agent acquisitions ($100 FAAB budget per team with zero dollar bids allowed) we will also break down every major trade, with perspectives from both sides of the deal.

This was a light week on the transaction front, relatively speaking. However, $50 in FAAB was dolled out on some interesting targets and one minor trade was executed over the long weekend. The move that merits the most attention for deep dynasty owners, simply because he is more than likely available on the wavier wire in most leagues, is Yankee left-hander CC Sabathia, who has allowed just one run on five hits while striking out 15 batters over his last two starts since coming off the disabled list for New York. 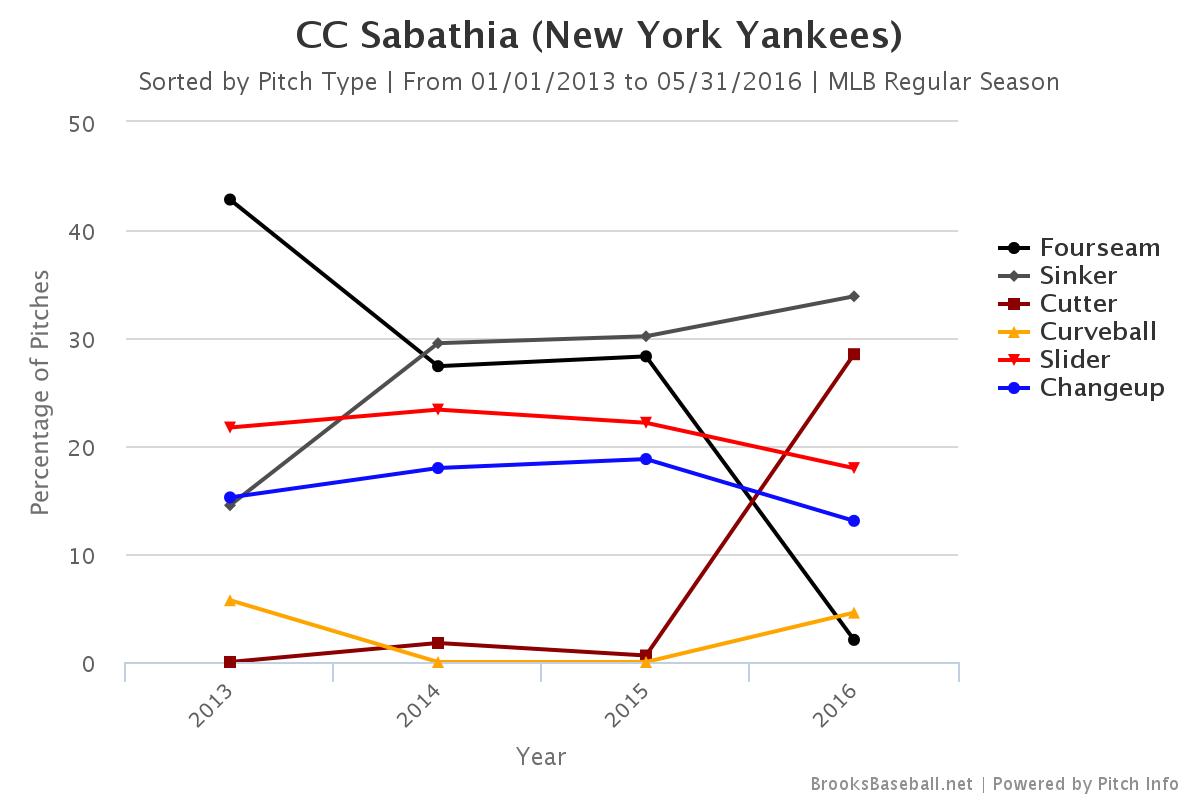 The 35-year-old southpaw has completely overhauled his repertoire this year, ditching his four-seam fastball, which had long since faded from its mid-90s halcyon days, in favor of a newly added cutter and sinker approach. The early results have been encouraging enough that he’s worthy of a roster spot in deeper formats, despite being an obvious health risk at this stage in his career. While his walk rate (3.3 BB/7) has begun trending in the wrong direction, the fact that he’s missing more bats (7.8 K/9) and given up just one home run in 41 1/3 innings this season, are extremely positive developments. Sabathia’s 4.00 Deserved Run Average, says that the 2.94 ERA is likely a mirage, but still nearly a strikeout-per-inning with a respectable ERA has value in a TDGX-style format. It’s understandable for fantasy owners to be reluctant to fully buy Sabathia’s renaissance campaign, but he’s made legitimate adjustments and gotten positive results. It’s time to start paying attention.

It’s surprising that Orlando was still available in a 20-team league with 40-man rosters, yet here we are. There’s no mystery to the 30-year-old’s game. He’s a classic fourth outfielder who can hit for a decent amount of power, swipe a few bases, and—if he’s able to charm the luck dragons like he’s doing at the moment with an absurd .478 BABIP in 93 plate appearances—provide a short-term boost across five categories. With Alex Gordon, Mike Moustakas, and Salvador Perez all on the shelf, the playing time will be there for the moment. It remains to be seen once Gordon returns whether Orlando can hold off Jarrod Dyson, Brett Eibner (who left Tuesday’s game with an injury) and others for everyday at-bats or if a committee situation develops.

The owner of the most Dickensian surname in the major leagues, the 27-year-old Merrifield has held his own, hitting .350 with eight runs scored, four RBI, and a stolen base in 40 plate appearances (10 games). Given the barren middle-infield landscape in TDGX, those numbers are surprisingly valuable. For more on Merrifield, here’s everyone’s favorite, J.J. Jansons:

“With Tulowitzki landing on the disabled list (shocking, right?) with his latest malady and Carlos Gomez' timetable for return unclear as of Sunday night (he since returned to the lineup on Tuesday), I needed somebody to fill in. Therefore, professional gentleman of leisure Whit Merrifield should see a nice amount of playing time over the next couple of months at a variety of positions. Whit can hit (.274 career minor league AVG) and he's stolen 48 bases in his last season-plus (171 games) at Triple-A Omaha. He's started seven of the team's nine games upon his recall, and his positional eligibility, basically every non-battery position, should come in handy if he sticks in Kansas City.” —J.J. Jansons

The Padres 2014 second-round selection, Gettys is hitting .290/.365/.404 with 13 extra-base hits (two home runs) and leads the Midwest League with 22 stolen bases in 210 plate appearances this season. With Short’s franchise engaged in a full-scale rebuild, this is a pickup that could pay dividends in the future.

With a start in the spacious confines of O.co Colliseum on tap, it’s easy to see why a contender like Chatelain would roll the dice on a fly ball artist like Dean. The 27-year-old left-hander owns a 3.43 ERA while striking out nearly a batter-per-inning (8.6 K/9) in four appearances (two starts) for Minnesota this season.

Yes, he’s Carl’s grandson, but I’m guessing you knew that already. Promoted to Triple-A two weeks ago, Yastrzemski is hitting .333 with a pair of home runs and four steals in just 13 games so far. The 25-year-old outfielder has a chance to make his major-league debut at some point this season and is a solid prospect stash candidate for a contending fantasy roster.

After posting a 1.87 ERA over nine starts at Double-A to open up the 2016 campaign, the Phillies promoted Lively to Lehigh Valley this past week. He fired seven innings, allowing just two runs on five hits with five punch-outs in his Triple-A debut last Friday. He’s never going to rack up gaudy strikeout totals, but if he sticks in a major-league rotation, Lively will have plenty of value in a league (like TDGX) bereft of virtually any starting pitching options on the wavier wire.

While Tyler Glasnow and Jameson Taillon have garnered the vast majority of the national attention this season, it’s their unheralded rotation mate Kuhl, who leads the International League with a 1.03 ERA through nine starts this season. The Pirates 2013 ninth-round selection out of Delaware, Kuhl features a low-90s fastball along with a slider and changeup. He hasn’t grabbed any headlines because he’s struck out just 39 batters in 52 2/3 innings of work, but it’s his pinpoint command (just six walks all season) that is truly impressive. Don’t be surprised if Kuhl get’s to bring his stellar 1.11 career WHIP to Pittsburgh this summer.

Owner of the longest hit streak in professional baseball (sorry Xander), Dickerson’s currently stands at 28-games for Triple-A El Paso. The 26-year-old is hitting .413/.454/.683 with eight home runs in 37 games this season. Coincidentally, the Padres outfield is a mess. You know what to do.

“Alcantara has a big fastball, and while it's not clear that he'll have the secondary skills to make it as a starter long term, I think the upside warrants him being owned in a league this size. He has 28 strikeouts over his last three starts (18 innings), and his projectable 6-foot-4 frame, along with the Cardinals' track record of developing hard-throwing youngsters, has me hopeful he can max out.” –James Anderson

The lone trade in TDGX this past week involved James Anderson (Rotowire) sending a 2017 third-round pick to Tom Trudeau and Craig Glaser (MLB.com) in exchange for Royals outfielder Jarrod Dyson.

“I still think I'm behind Ian Kahn/Tim McLeod and Luke Chatelain on paper, as well as in the standings, but trading a third rounder for a guy like Dyson, who could very easily help me move up 3-4 spots in the standings, was a no-brainer. I'm second to last in batting average, so and I'm hoping to just get a little lucky in that department, and Dyson shouldn't affect me positively or negatively there, but the potential gains in steals are easily quantifiable.” –James Anderson