There’s a pretty well-established correlation between hitting the ball hard and successfully reaching base. Line drive performance tends to bear this out, insofar as batting average and slugging percentage on this kind of batted ball far outstrip the other two main batted ball types: fly and ground balls.

In the current era of advanced outfield positioning, flyballs have suffered the gravest of recessions recently. The number of fly-ball doubles and triples has declined over the past few years, driving an overall deterioration in fly-ball slugging percentage from .613 as recently as 2012 to its current .528 (which should be noted has rebounded significantly early on this year from two straight years of sub-.450 marks). Fly-ball batting average, meanwhile, remains buried well under the Mendoza line for a fourth consecutive season.

So far in 2016 the heightened number of infield shifts has shown a marginal effect on batting average and slugging percentage on ground balls in play, meanwhile. Batters have hit .237 on grounders, down from .247 two years ago, but well in line for the ten-year average. The .257 collective slugging percentage follows a similar regression to long-term averages after a brief two-year surge.

With line drives, it’s a coin of two sides: teams continue to trade less hits for more damage on line drives that do land on grass. Following a four-year period in which slugging percentage on line drives had been suppressed to historic levels in the modern era, that number has now been back up to par with the tail end of the PED era for the last season-and-a-third: 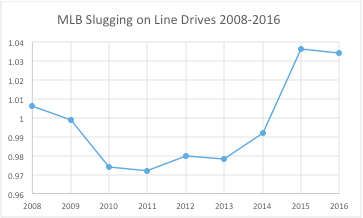 The current major-league batting average on line drives of .657, meanwhile, is on pace for a fourth-consecutive season in the mid-.600’s, well below the previous 16-year rough average of .725.* Teams are saving baserunners with their positioning, but the ones that reach on line drives are once again announcing their presence with authority.

So how should this information affect fantasy projections? Well, a couple of things. The general tendency after early season runs is to expect regression to a perceived mean, and it’s a generally solid tendency. But not all players are created equal, and some players who’ve posted high BABIPs are not as likely to regress all the way down towards average range as others. Batting average is one of the most variable standard stats in fantasy baseball – and one of its least-easily projected – so anything we can do to contextualize player performance in the category is good, right?

There are a bunch of useful ways to parse this data, but for our purposes today, let’s take a look at the high-BABIP guys through the first quarter-plus of the season to see if we can’t identify the guys most likely to defy gravity. When we’re assigning degrees of likelihood that a player’s batting average is sustainable or not, we’re going to end up wanting to bet on the ones that hit a high number of line drives, not a ton of fly balls, and then show an ability to go up the middle or to the opposite field regularly and/or don’t face a ton of shifts. Pull-happy tendencies against the shift are obviously not ideal, though it’s worth noting that a handful of guys have managed to post extraordinary early BABIP numbers in spite of that pattern. Those guys fall on the opposite end of the spectrum to our present interests here, and I’ll touch on them next week.

Taking a look at the Top 25 BABIP performers to date, here’s a list of the hitters that roughly fit our criteria by checking (or at least coming very close to checking) at least three of our four boxes with above-average rates. Note that a league-average line drive rate is currently 20.6 percent, batters hit to centerfield 34.9 percent of the time and to the opposite field another 25.9 percent, and big-league teams have shifted on 19.4 percent of all plate appearances this season: 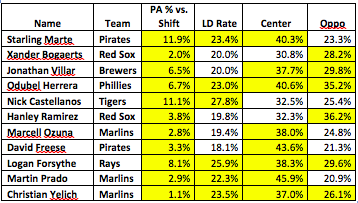 Odubel Herrera’s walk rate has rightly grabbed most of the headlines thus far, but interestingly his .395 BABIP—coming on the heels of a .387 mark in his rookie campaign—isn’t nearly as absurd as your knee-jerk reaction to it might assume. He’s rolling with the third-lowest pull rate in the majors, and while there’s a decent amount of rolled-over ground-ball contact hiding within that number his above-average line-drive rate includes well above-average opposite-field contact that precludes heavy shifting. He’s been as true an all-fields hitter as you’ll find in his young career, and he has now logged a .389 BABIP across more than 700 big league plate appearances. That BABIP would pace him second-best all time, so the smart money is certainly on some regression moving forward. But the skill set is clearly conducive to running a high-end number, and combined with a solidly below-average whiff rate he’s one of the best bets on this list to continue hitting for average.

The other two are Christian Yelich and Logan Forsythe. The former has produced Herrera-lite numbers in his career, with a .366 BABIP that now ranks eighth all-time among hitters who’ve logged at least 1,500 plate appearances. He gets dinged a lot for hitting as many ground balls as he does, but he hits them extremely hard – his 92.5 mph average grounder velocity ranks eighth in baseball (minimum 100 batted balls) – and he distributes them evenly around the horn. Add in an above-average line drive rate and excellent strikeout numbers, and I think it’s safe to write over his penciled-in name with pen on the “best pure young hitters” list.

Forsythe, meanwhile, has evolved into a different, more complete hitter since arriving in Tampa back in 2014. It took some trial and error in his inaugural season to get him there, and he had to overcome a rough spell of luck in the second half of that season. But his dramatically improved BABIP performance over the past couple seasons has coincided pretty directly with a shift in his approach towards working to all fields with greater consistency. This year’s line drive rate is out of whack with his previous efforts to a degree that more skepticism is warranted than with Yelich or Herrera, but he has shown the underlying batted ball performance to largely support his spike in production regardless.

Also in the mix is Jonathan Villar, who doesn’t hit quite as many line drives but who peppers the left side with the ones he does hit and fills in the rest with decently hard ground ball contact. Nick Castellanos has hit an absurd number of line drives this spring, and the gains don’t look to be altogether unsustainable. And Martin Prado is just pounding more balls into the ground this year than he has at any point in his career, but they’ve been up-the-middle grounders and his above-average exit velocity on worm-burners reflects this directional evolution. Combined with his elite strikeout rate he’s well-positioned to continue posting a helpful batting average, albeit at the cost of much in the way of power.

You want high-BABIP guys who stand the best chance of maintaining a lofty batting average? These are the guys I’d start with. Next time we’ll look at the “sell” candidates whose high BABIPs aren’t particularly well-supported by their contact profiles or the defensive alignments they face.