Nick Castellanos began the year being drafted outside the top-15 third baseman, behind guys like Danny Valencia. Almost two months into the season, though, the Tigers’ third baseman is hitting .340/.366/.582 with eight homers and 30 RBI. He’s a top-five fantasy third baseman, according to ESPN’s Player Rater.

However, I think there’s pain coming down the road for Castellanos owners, and not just because he’s sporting a .393 BABIP that’s bound to regress. Everyone can see that. What’s not obvious is that his power surge has been a bit of smoke and mirrors. ESPN’s Home Run Tracker has six of Castellanos’s eight home runs as being “just enough”—or clearing the fence by less than 10 feet. That’s tied for the second most in all of baseball, with Boston’s Mookie Betts checking in at number one.

In some ways, that’s unsurprising. Castellanos didn’t suddenly transform from a 10-15 home run hitter—as he’s been in the past couple of years—to a 20-plus beast at the hot corner. It might happen this year due to his monstrous start, but fantasy owners shouldn’t be expecting his sudden uptick in homers to continue. His average batted-ball velocity is 89.0 mph, which is rather pedestrian and is tied with Johnny Giavotella. So, no, Castellanos isn’t backing up his surprise power surge with analytics that suggest he’s mashing the cover off the baseball.

At the most, one could say that Castellanos has lowered his ground-ball rate to 28.2 percent, which is giving him more chances to hit homers. It’s interesting that he’s hitting for such a high batting average with that high fly-ball rate, though, especially with a strikeout rate at 22 percent.

The 24-year-old can hang his hat on his success against sliders this season, something that has historically given him fits.

That improvement is one of the biggest reasons why Castellanos has burst onto the stage this year. It extends to curveballs, as he’s hitting .462 this year on curveballs he’s put into play. That greater success against breaking balls has seemingly translated into more confidence, as he’s swinging more than he ever has against breaking pitches. 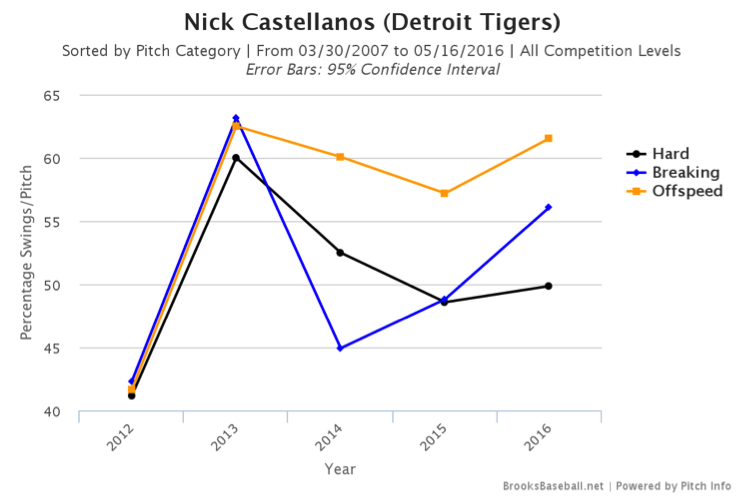 I’m not sure that’s particularly sustainable or predictive of future success; however, it is a big part of what Castellanos has done well in 2016. He’s crushed breaking pitches—both for average and for power—which has closed one of the major holes in his swing. He’s still only hitting .143 at pitches in the low-outside corner of the strike zone. But showing an ability to capitalize on bad sliders and curveballs has been huge for Castellanos, as pitchers can’t consistently locate in that low-outside corner all game. They’ll eventually miss, and the young man has punished those mistakes.

I still believe that Castellanos has the potential to be a better real-life player than a fantasy player. By that, I think he’ll hit .270 with 12-15 homers, on average, and that’s just not all that valuable in the standard fantasy league. It’s fine in today’s run environment, though, and can be attractive at, or near, the league minimum. Unfortunately for the Tigers, he’ll need to improve with the glove to be a truly quality option at third base, and that’s a tall task.

Castellanos owners must be brave and not get lulled to sleep by a crazy strong month-and-a-half. There are plenty of signs that this power surge is not sustainable over the course of the year, nor should it be expected to occur again next year. I think he’ll hit for more average than he has in the past, but I’d be surprised to see the 24-year-old reach the 20-homer plateau more than once or twice in his career. Something will have to have drastically changed in his approach and his swing for that to happen. It’s best to sell while the gettin’ is good.

You need to be logged in to comment. Login or Subscribe
JoshC77
While I agree about not totally buying into the power surge, I will say one thing. If the power surge had occurred with "just enough" power in say, August, I'd dismiss it more readily as having been a fluke. But....what do "just enough" homers in April/May become in the warmer summer months? The fact he is hitting them now, when it is the most difficult, could be a sign of increased output that could be more sustainable than at first blush.
Reply to JoshC77
bhacking
And in the article was another very important stat: he's 24 years old. For continuous leagues I'm buying.
Reply to bhacking
jimmyb1799
I don't really ascribe to the theory that players automatically get better just cuz they're on the correct side of the age curve.
Reply to jimmyb1799
jimmyb1799
I mean, maybe, but you're still going to have a tough time dealing w/ the very mediocre batted-ball velocity he's shown this year.
Reply to jimmyb1799
jfranco77
Who have those sliders and curves been from? Maybe he's just mashing them because he's been seeing bad ones.
Reply to jfranco77
JasonPennini
I Read Eno's piece on Fangraphs regarding Castellanos' launch angles. Curious if you've read this and what you make of it.
Reply to JasonPennini
bigbart
Wondering how you feel about BHQ's more recent takes on him, the very latest stating, "His power emergence has been validated by an elite 172 xPX that has been generated by frequent hard contact (119 HctX) and increased LD% and FB% (28/28/45 G/L/F)."
Reply to bigbart