Who doesn’t love a good fastball? We’re still only a handful of starts into the season for starting pitchers, and it’s still pretty early to be looking at some of the performance indicators (DRA, cFIP, etc.) to draw many conclusions. But one thing that’s always worth checking out around this time is pitch movement and effectiveness, as those can clue us in early on what’s driving some of the early performances we’re seeing. Big steps forward with a particular pitch can be an indicator that initial performance is or isn’t likely to be sustainable. So let’s start where everything in pitching starts, and look at some of the best hard stuff we’ve seen in April.

Drew Smyly, LHP, TAM – Smyly has been inducing a swinging strike rate of more than 35 percent with his four-seam fastball this year, tops in the big leagues. To put that in context, the average four-seamer—and this includes relievers airing it out, mind you—has coaxed a swing and miss at about a 22.6 percent rate. The pitch has played to modestly above-average performance to this end in the past, but he’s taken it to the next level this season. He’s added almost a full tick to his velocity in the early going, and has continued what has been a steady increase in his deployment of the pitch to the northern hemisphere of the hitting zone. Since arriving from Detroit back in 2014 Smyly’s thrown more and more high fastballs. To wit, some charts! 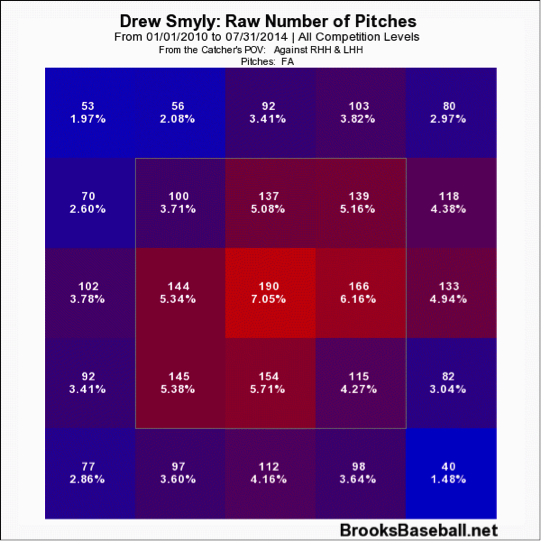 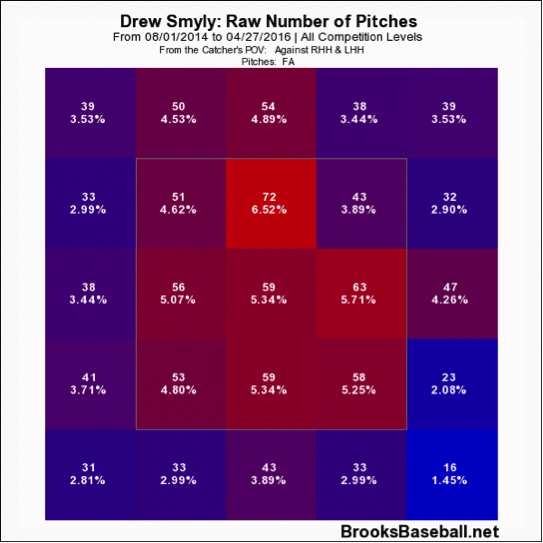 That first one’s his Detroit plot for four-seam location, and the second’s his pattern with the pitch in Tampa. Big difference. And that difference has only intensified in April: 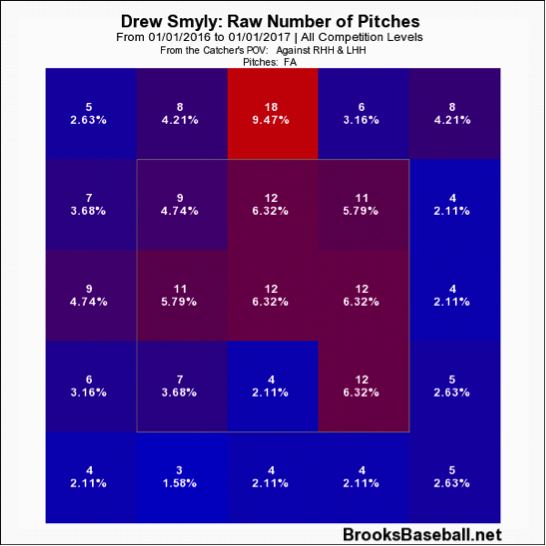 The strategy makes sense given the shape of Smyly’s four-seamer. His fastball has had the second-most “rise” of any heater in the early going, resisting gravitational pull by almost three and a half more inches than a league-average four-seamer. And sure enough, almost a quarter of his four-seamers have been elevated out of the zone, and batters have come up empty on over 40 percent of their swings up there. The emphasis and results have helped his curveball, as well, helping him take that pitch into solidly above-average territory for whiff-inducement as well. The movement, the extra velo, the sequencing… the whole package adds up to a strong support for his elite performance and a check mark in the column of those who invested on average just a 10th or 11th round pick on him in re-drafts.

Other Four-Seamers of Note:

Rich Hill, LHP, OAK – Hill’s command of the pitch isn’t outstanding, but his wildness has been effective playing off his electric curveball. His swinging strike rate with the pitch checks in third-highest in baseball. The poor command, however, has meant a lower pure swing rate than anyone else in the top 15.

Robbie Ray, LHP, ARI – In terms of pure movement, few fastballs can match Ray’s in the early going, and that may play a role in why he’s struggled to command it thus far. His heater cracks the top 20 in both horizontal and vertical movement, which puts him in the company of just three other starters (Verlander, Salazar, and Happ). Stop me if you’ve read this before, but his poor command of the pitch has led to fewer offers than anyone but Hill among the top 15. In both cases, marginal improvement in location could lead to big things.

Jimmy Nelson, RHP, MIL – Similarly, Nelson’s command of his four-seamer has been all over the place. But when he’s travelled north with the pitch he’s generated nine misses on 12 swings, helping drive the fifth-best whiff rate overall with the pitch. It’s a relatively straight pitch compared to the other top bat-missers to date, but its well above-average spin rate falls onto the tasty part of the swing-and-miss curve and suggests the pitch holds plane, which is also encouraging. He’s also induced the highest percentage of infield pops of anyone so far.

Noah Syndergaard, RHP, NYM – As if Thor needed any more hype for his performance thus far. I hesitate to spend too much time on him, because I fear we’ll all drown here at BP headquarters if I add any more to the river of saliva gushing out of the Mets BP room. But Syndergaard’s 98.8 mph sinker is a full 2.5 miles-an-hour faster than any other sinker in baseball, and it moves the most vertically. Hitters are offering at it over half the time, and not only is he generating a top-10 whiff rate with the pitch, it is also currently resulting in a 69 percent groundball rate and a league-best 18 worm-burners for every flyball. Woof.

Other Two-Seamers of Note:

Martin Perez, LHP, TEX – Perez has produced some ugly peripheral stats to date, but it hasn’t been on account of his sinker. The pitch features solid, across-the-board relative movement and velocity traits, and it currently boasts both the second-highest swing-and-miss and groundball rates of any sinker. The changeup has induced a substantial increase in whiffs thus far, and while that hasn’t translated to strikeouts yet (at all) there’s at least enough here that players in medium-depth leaguers should be keeping a close eye for the time being.

Aaron Sanchez, RHP, TOR – That clunker in his last start notwithstanding, Sanchez’s sinker has been the life blood of a very good pitcher in the early going. About three of every five pitches he throws are two-seamers, yet even in spite of the heavy rotation batters are pounding the pitch into the dirt 63 percent of the time they make contact. And the contact’s not a given, either: his whiff rate with the pitch checks in 15th-best. His velocity on the pitch is some of the best in baseball, and he backs it up with solidly above-average movement. And while Toronto’s defense has been just middle of the pack in converting grounders into outs this year, they returned virtually intact a group that finished fourth-best in the majors last year, indicating some room for positive regression behind Sanchez.

Charlie Morton, RHP, PHI – The news that Morton will miss the rest of the season kind of couldn’t have come at a worse time for his NL-only owners. Because prior to the injury, all of a sudden Charlie Morton was throwing 95. While useless in our quest to find value, I would just like to acknowledge that poor Charlie Morton does have a wonderful sinker, and it had gotten intriguingly faster this year. His 95.2 mph average velocity in his first four starts was a staggering 2.5 miles-an-hour faster than the pitch played in either of the past two seasons. He’s shown velocity spikes in the past (2010, 2013), but this was extreme. And it led to him getting more east-west tail on his two-seamer than anyone who doesn’t throw from Chris Sale’s absurd arm slot, along with a roughly 50 percent higher swinging strike rate. Philadelphia’s the worst defensive infield in the league, and their offense and bullpen are terrible enough that even with the eyebrow-raising velocity and effectiveness gains Morton still would’ve been more appropriately consigned to deep leagues. But it’s a bummer we won’t get to see how his season plays out.

How do you really feel, Wilson?
Reply to sam19041
jfranco77
I really want to like Martin Perez. I was amazed when he struck out the side in the first inning last night.

Know how many Ks he finished with for his 6 innings of work? 3.
Reply to jfranco77
jrbdmb
Since you mentioned DRA, any idea when we will start seeing numbers for 2016 in the stats and elsewhere? The end of April is early, but not *that* early.
Reply to jrbdmb