I Firmly Believe: David Robertson will be a top-three closer

It seems that, year after year, David Robertson is one of the most underrated relievers in all of baseball. Heading into this season, he was being drafted as the 11th RP according to ADP data. That’s exactly where he finished among RP-only pitchers on ESPN Player Rater’s last year, the second highest for a pitcher on a team that finished under .500. Robertson’s appeal has never really been the huge upside, but rather the boring consistency. This, however, should be the year he joins the elite class of closers.

We’ll start with the obvious, which is that he should get more save chances this year. I was cautiously optimistic about the White Sox heading into the year, and they’ve gotten off to an encouraging start. Even better for Robertson is the fact that they’re getting by with strong starting pitching and a relatively weak offense. This, combined with a much-improved bridge from the starters to the closer, will result in a lot of close wins. There’s no reason that Robertson can’t end the year at or near the top of the save chance leaderboard.

In addition to getting the chances, there’s no doubt he has the talent to convert the vast majority of them. Since 2011, he’s been one of the very best pitchers in all of baseball. In each of the last five seasons, he’s finished with a FIP under 2.75 and a cFIP under 70 with just one season with a DRA over 2.80. He’s also ramped up his strikeout stuff in the last two seasons, striking out over 12 batters per nine innings in 2014 and 2015. While the strikeouts haven’t been around as much this year, his swinging strike rate is actually up. Wade Davis and Kenley Jansen are still above him on my list, but I’m bullish on Robertson joining them in the elite RP ranks in 2016.

I Firmly Believe: Gregory Polanco will get some MVP votes

I wasn’t really sure how to word this one. I think he will get plenty of recognition after the season is over, but I don’t realistically think he’s going to challenge for one of the top two or three spots in MVP voting. Even if he’s not Bryce Harper-esque, though, Polanco has a lot going for him in 2016. The classic case of a post-hype sleeper, he’s broken out to a red-hot start this season.

Through his first 63 plate appearances, we’re talking about a guy with a .314 TAv that is boosted by an incredible .435 OBP. While he’s probably not going to get on base at quite that high of a clip, there’s plenty of reason to believe he can remain among the league leaders for the whole season. For one thing, he’s showing real gains in his plate discipline. To go along with his 20 percent walk-rate, he’s showing better strike-zone recognition by swinging at more strikes and laying off more balls. Additionally, he should be able to keep his high batting average with a combination of a reduced strikeout rate and a high BABIP. The former is supported by the aforementioned strike-zone recognition as well as a lowered swinging-strike rate. The latter is supported by a line-drive heavy approach as well as improved quality of contact (judged by exit velocity) on all pitches.

The elephant in the room, of course, is the power. It’s hard to be an outfielder with low power numbers and still get MVP votes, but the home runs will come at some point. Even if he’s never going to be a 20-homer hitter, he’s hitting the ball hard enough to expect some added distance being added to his fly balls in warmer weather. By the end of the year, it’s not at all hard to see a 10-15 home-run hitter with 30-plus steals. Assuming the Pirates stay in contention all year, Polanco will get more than his share of recognition with his improved plate discipline and quality of contact.

I Firmly Believe: Carlos Gomez will not bounce back

Here, we have the opposite end of the spectrum of Polanco. To be clear, I’m not saying the Gomez is going to be quite this bad through the whole season. Right now, he’s among the worst batters in baseball with a .204/.235/.286 line. What’s scary is that he’s hitting so poorly with a .278 BABIP. Sure, that’s below his career norm, but it’s not nearly as out of line as the rest of his batting line. Instead, he’s struggling due to an inflated strikeout rate, a cratering walk rate as well as a lack of any hard contact.

Specifically, Gomez is getting eaten alive by fastballs, which is not a good look for a major-league veteran. So far this season, over 32 percent of his swings against four-seam fastballs have resulted in whiffs, per Brooks Baseball. Additionally, a whopping 54 percent of his swings against splitters have been whiffs. To make matters even worse, his exit velocity on hard pitches is down significantly. 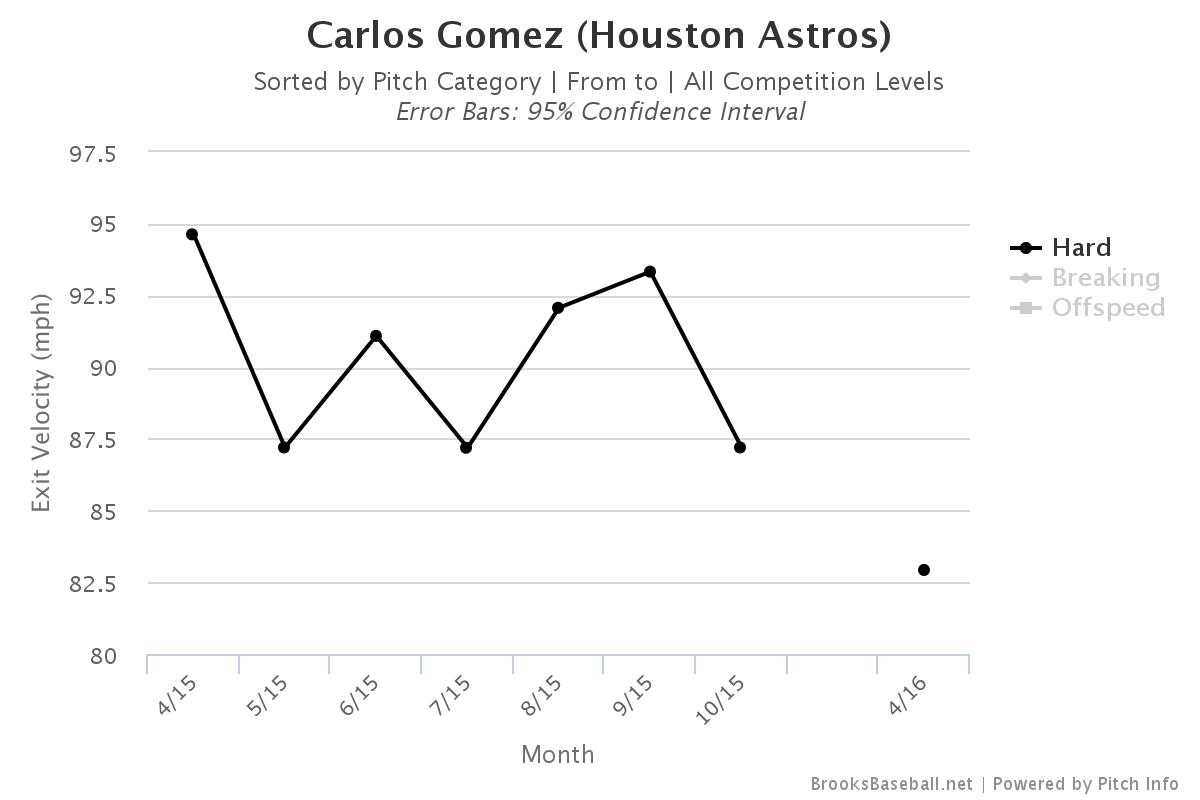 At some point, Gomez will go on some sort of a hot streak to get him out of the very bottom of the leaderboards. However, that won’t be enough to keep him from being a bust to fantasy owners. As the 16th outfielder selected in NFBC drafts this spring, much more was expected out of him. However, given his early plate discipline issues and his inability to hit fastballs, he looks poised to be one of the bigger busts of the season. —Matt Collins

I Firmly Believe: Troy Tulowitzki will be fine

Tulowitzki is currently hitting .161/.284/.286 in 67 PA. That’s not good. Last season, after being traded from Colorado to Toronto in July, Tulowitzki hit .239/.317/.380 in 183 PA. That’s not very good either! Because of this—and likely in part because of Tulo’s extensive injury history—the five-time all-star earned an overall ADP of 57 this offseason, per FantasyPros.com. That’s a far cry from the perennial top-10 talent Tulowitzki was drafted as earlier in his career.

I get the causes for concern. Tulowitzki may never post Coors-esque numbers outside of Coors. He’s still hurt often enough that when he slumps, it’s a big deal for his season-ending stat line. And Tulo’s strikeout numbers have jumped considerably in the past year, which is a pretty bad sign. I still think he’ll be fine, though. Tulowitzki simply has too much talent and plays in too good a lineup to be this bad for much longer. His running days are behind him and we’ve known this, but he’s still in a hitter-friendly environment, bats behind some of the best hitters in the league and is only in his age-31 season. If you want to tell me Tulo’s days of hitting .300 are over, maybe I could be convinced. I’m positive he’ll end the year with 15-20 homers, 70-plus RBI and R and a good average, though. He just needs to stay on the field and needs a little more time to adjust to a new league.

There’s a tendency to overreact to a one-season sample whenever a marquee free agent has a bad first year with his new club. Time and time again, we see proven MLB hitters take a while to adjust after signing a big contract or being traded to a new team. Often times, I’ll target these players after their first season, much as I suggested doing with Tulowitzki above.

You should not emulate this strategy with Pablo Sandoval. After hitting just .245/.292/.366 in his first year in Boston, Sandoval seemingly put on even more weight in the offseason, lost his starting job to Travis Shaw and is now on the DL with an injury that’s getting more mysterious by the minute. It’s hard to believe for a player with a $95 million contract, but there’s a good chance he’s already done in Boston, and there’s no real indication any team should be eager to acquire him soon. That means Sandoval has quite the rough road back to getting regular playing time, and since he’s now a season-plus removed from being a fantasy asset, that means he’s not a buy-low candidate I’d be looking to acquire. Would I pick Sandoval up off of waivers in a TDGX-sized 20-team, 40-man roster dynasty? Sure. Anything much shallower than that, however, and I’m letting someone else gamble on a Panda bounceback. In redraft leagues you can forget about him complete.

I Firmly Believe: Domingo Santana can stick around

One of the best things about watching teams rebuild is seeing the non-elite but fantasy-relevant prospects who get real shots at playing time. The Brewers have become a haven for these types of players, and none is more promising to me than Santana. While the 23-year-old always has and always will pack plenty of swing-and-miss into his game, the power here is very real, and if he keeps demonstrating a willingness to take some walks and keeps hitting homers, he’s got a chance to build a long career as a viable fantasy outfielder.

Santana is still a ways away from being a sure thing or a safe investment, but I’ve been fairly encouraged by what I’ve seen so far in his young MLB career. While Santana’s .225/.325/.403 line doesn’t help my case, it’s important to remember that he’s just 23 and that we’re dealing with less than a half season’s worth of plate appearances. Santana has a long history of raking in the minors, and while I don’t believe he possesses a plus hit tool, I do like his approach at the plate. At worst, we’re dealing with a lefty-masher who’s going to be interesting in deeper leagues for a long time. At best, we’re dealing with a power-focused OF 4/5 who’s especially attractive in OBP leagues. Players like this never steal headlines, but if you can buy in on the ground floor in a dynasty league, you’ll be happy later. —Ben Carsley