Welcome to the final installment of our new fantasy series focused primarily on analyzing early average draft position (ADP) trends. The goal of the series is to identify trends in the data to improve our draft-day strategy going forward. The early ADP data referenced for this entire series, housed at STATS.com, is from 2016 National Fantasy Baseball Championship (NFBC) leagues, which are comprised of 15 teams. Therefore, the average round data is reflective of that league size.

If you’ve missed any of the previous entries in this series, here is your opportunity to catch up:

Davis and Jansen are unassailable, but should fantasy owners be slightly concerned about Kimbrel and Chapman?

There is a clear-cut, established top four at the top of the position, with Davis (the newest member) leading the way. He’s arguably been the most dominant reliever on the planet for the past two seasons (holding opposing hitters to a minuscule .171 TAv during that span) and now has the job security and the lofty save total to cement that status in fantasy going forward. The secret ingredient to Davis success is his ability to generate above league-average whiffs-per-swing rates not just on his nasty curveball, but his fastball and cutter as well. Davis mix of upper-90s velocity with insane movement is a recipe that spells disaster for opposing batters. 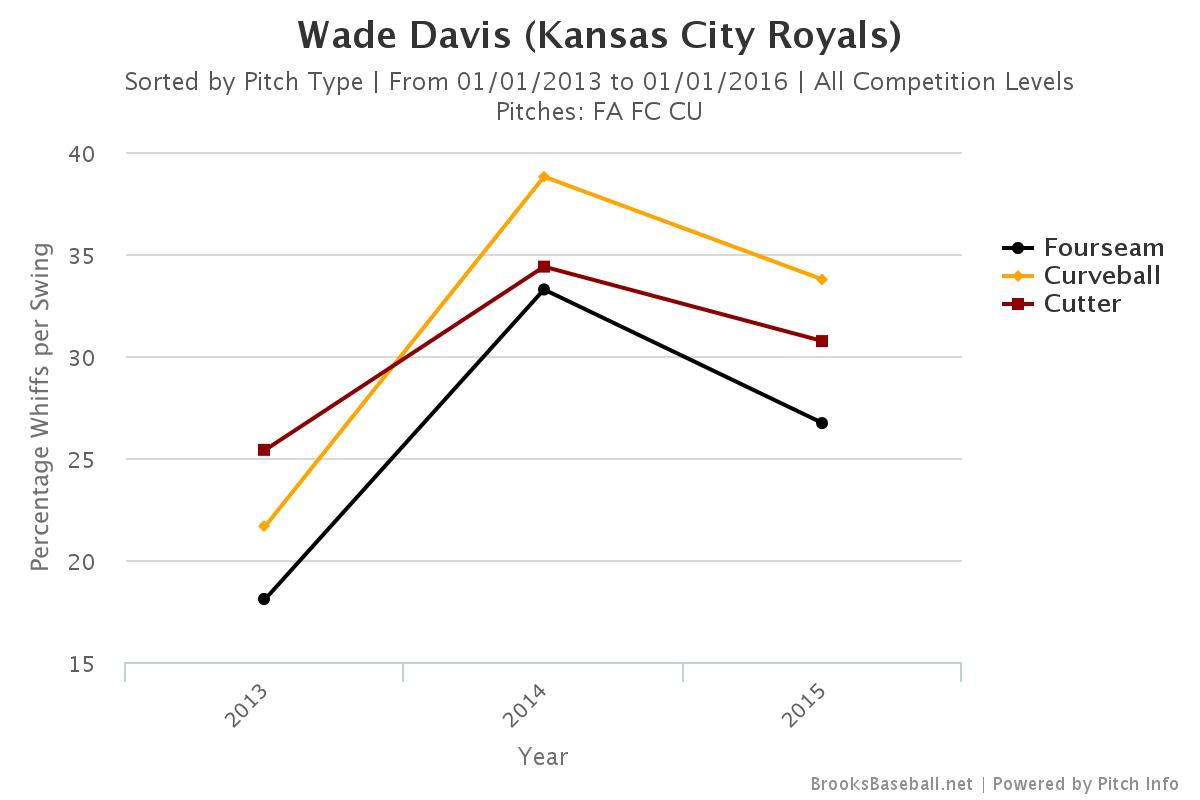 If it weren’t for periodic health issues that have cropped up over the past few years, there’s a case to be made for Jansen as the top closer in the game. The two remaining names in this tier, Kimbrel and Chapman, should both be approached with caution. The league adjustment, moving away from the senior circuit for the first time in their careers, may not be as extreme as it might be for starting pitcher or position player, but it’s something that shouldn’t be dismissed completely. A 30-game suspension to open up the season will put a damper on Chapman’s fantasy upside innings-wise, but when he’s on the field, he’s a force of nature.

With the elite closers off the board, the next run doesn’t occur until the seventh round. The most notable name here is Familia, who from July 31st until the end of the regular season, a stretch spanning 30 appearances, allowed just four earned runs (1.23 ERA) and held opponents to a .213 average, with a 37-to-6 K:BB ratio. There’s a reason he’s going among the top five closers this spring. Most of it has to do with a newly added splitter, an insane offering which has launched 1,000 soliloquies from internet baseball writers solely because it’s fired with an average velocity that defies logic.

Giles, the newly acquired Astros fireballer, is going to need to hold off more than capable incumbent Luke Gregerson, but based on the pure stuff and raw statistics over the past two years, it’s hard to argue against him as a no questions asked top-10 fantasy reliever moving forward. Assuming his pinpoint control remains intact.

Melancon erased the early season concerns of the fantasy masses regarding his down velocity to lead the majors in saves and finish as the top closer in fantasy last season. He’s a bargain as the seventh closer off the board in 2016.

Since the start of the 2014 campaign, Baltimore’s ground ball machine, Britton, has posted a 1.77 ERA over 135 appearances with a 141-to-37 K:BB. The 28-year-old southpaw doesn’t garner as much attention as the “big four” at the position, but from purely a statistical standpoint, he’s been just as dynamic over the past two seasons.

Terry Francona has been notoriously loyal to his closers throughout his managerial career, but Allen had to be testing even his patience with his performance (11.57 ERA over eight appearances) last April, which was sponsored by Shakey’s Pizza. As my colleague Greg Wellemeyer expertly pointed out earlier this week, Allen finished behind only Jansen, Andrew Miller and Dellin Betances in cFIP, a predictive pitching metric, last year. On a loaded Indians club, he should be in the mix for 40 saves.

The season-ending elbow injury to upstart Carter Capps, who was expected to push Ramos for the closer role in Miami this spring, has provided the 29-year-old with renewed job security and boosted his ADP into the top 15 closers. Miller, who was the top closer in the AL last season according to Mike Gianella’s retrospective player valuations, has jumped up into the top-20 closers thanks to the Chapman suspension and the boost his full-season ratios can provide his prospective owners.

The best value in this tier is undoubtedly K-Rod, who remains a perennially underrated asset by fantasy owners. Granted he isn’t lighting up radar guns anymore (his average fastball velocity dipped to 90 mph last year), but he’s still punching out over a batter per inning thanks to an electric changeup that ranked among the leagues best in terms of whiffs-per-swing in 2015. He’s only 33 years old (somehow) and racked up 92 saves over the past two-and-a-half seasons in Milwaukee. He’s the uncontested stopper in Detroit and is a bargain outside the top 10 closers in fantasy.

It becomes a bit more uncertain in terms of long-term role throughout this range of ADP, but the name to target here is Betances. The great Jeff Quinton put it best in his reliever target piece earlier in the week, “Betanaces is currently the 82nd pitcher being taken in mixed-league drafts. In mixed leagues last season, Betances was the 28th-most-valuable pitcher. In mixed leagues last season, Betances was the 77th-most-valuable player (pitcher or hitter).” If the goal is to extract as much value as possible on draft day, it’s nearly impossible to overlook Betances as a potential target, even if he’s not racking up saves in New York.

Why the Mariners have elected to give Cishek the keys to the car after he ran over the mailbox (4.4 BB/9) and ultimately crashed into the garage (4.71 DRA) between Miami and St. Louis last season defies logic. Someone is going to get saves in Milwaukee, Philadelphia and Cincinnati. However, speculating on who leads those respective cellar-dwelling franchises in handshakes is a bigger mystery than the Hank controversy.

All kidding aside, Smith has the potential to put up spectacular numbers in middle relief with the Red Sox. By cFIP, he ranked 11th out of 329 pitchers with at least 50 innings last year. He’s the perfect ratio insulator, available for next to nothing on draft day.

Honestly, I’d rather have Liam Hendriks or Kelvin Herrera…