Eaton was selected in the 19th round (571st overall) of the 2010 draft by the Diamondbacks out of Miami (OH) University. His ascent through the minors was rapid, as he hit .348/.448/.499 in 1,576 plate appearances, reaching the majors in 2012 and appearing in 22 games. In 2013, he suffered a left elbow strain in spring training that kept him out of action until July and limited him to 26 minor-league games and 66 major-league games. In his age-24 season, Eaton hit .252/.314/.360 with three home runs and five stolen bases in 277 plate appearances at the major-league level. The Diamondbacks apparently had seen enough of Eaton’s act, as they shipped him to the White Sox in December of 2013 as a part of the three-way deal that also included Tyler Skaggs being sent from Arizona (to the Angels) in exchange for Mark Trumbo. Eaton suffered a variety of leg ailments in 2014 that sent him to the disabled list in May and held him to 123 games of action. He was productive while healthy, hitting for a .300 AVG, getting on base at a .362 clip, and adding 15 stolen bases. Eaton’s .281 TAv equaled Yoenis Cespedes’ (among others) and placed him in a tie for 107th among hitters.

What Went Right in 2015?
Eaton changed his offseason workout program heading into 2015, focusing on adding more mass, as he did while in college, and also sought to retool his swing in an effort to pull the ball more and add loft. He was given a five-year, $23.5 million contract extension in the spring and for the first time in his professional career, Eaton played in a full season’s worth of games (153). He came to the plate 689 times, which surpassed his previous career-high of 562 PA, which came in Triple-A with Arizona in 2012.

The difference between Eaton’s first-half and second-half numbers were stark:

Eaton’s .904 OPS after the All-Star break ranked 23rd among hitters and buoyed him to a 37th-overall finish among hitters on ESPN’s Player Rater, sneaking him inside the top 20 outfielders. He wound up with a .287/.361/.431 line, and his 14 home runs crushed his previous career total of six that came in over 900 plate appearances across his previous three big-league campaigns. His AVG and OBP (along with his BABIP) actually dipped slightly from his 2014 totals, but the increase in power certainly offset the difference, as his ISO jumped from .101 in 2014 to .144 in 2015, which wasn’t out of line with what he showed in the minors. Eaton also added plenty of value with his legs, as his 98 runs scored placed him in a tie with Curtis Granderson for 14th overall and his 18 stolen bases tied him with Kevin Kiermaier (and his eyes) for 22nd among outfielders. Eaton’s value in OBP leagues is also magnified as his .361 OBP tied Lorenzo Cain for 18th at the position.

What Went Wrong in 2015?
After receiving his shiny-new contract before the start of the season, Eaton struggled mightily out of the gate, hitting for a .192 AVG with zero home runs and one stolen base in 83 plate appearances before May. What’s particularly puzzling about Eaton’s 2015 season is that he hit 60 points higher away from U.S. Cellular Field and his OPS was over 100 points higher on the road. He hit eight of his 14 home runs away from Chicago. Historically, the ChiSox’ home park on the South Side has boosted offense, but in 2015 it played only slightly above average for left-handed power and the environment was five percent below league average overall for left-handed hitters, so perhaps Eaton’s home ballpark wasn’t as helpful as expected.

What To Expect in 2016
He should once again hit atop the White Sox order—a lineup that should be improved with the addition of Todd Frazier—but the questions surrounding Eaton heading into 2016 are ones that center on his ability to replicate his power output from 2015, as his AVG, OBP, and stolen-base totals have been consistent over his two seasons in the American League. 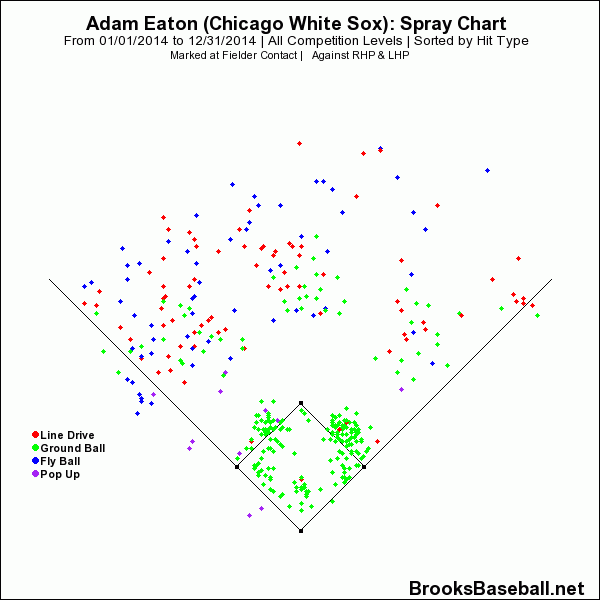 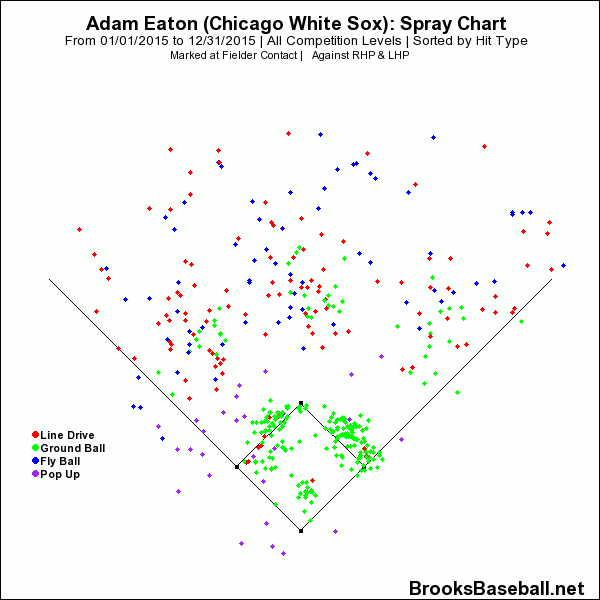 Eaton’s plan to pull the ball more in 2015 was marginally successful, but his change in approach to add more loft was clearly evident, as he decreased his groundball rate by nine percentage points, leading to a slight uptick in his line-drive rate and a noticeable difference in his flyball rate, up over seven percentage points from his 2014 campaign. Eaton’s HR:FB rate soared from 1.3 percent in 2014 to 10.9 percent in 2015, with his home runs averaging 394.2 feet, and all coming off of right-handed pitchers. The change in approach also led to a nearly four percentage point increase in his strikeout rate.

The Great Beyond
Eaton is currently the 29th outfielder (103rd overall) coming off of the board in NFBC drafts this year, which makes him a borderline seventh-round pick in 15-team leagues. I feel that’s too low.

Eaton does well the things that aren’t sexy in fantasy: the ability to hit for a near .300 AVG, score runs at a prolific clip, and steal 15-20 bases a season. Those three qualities certainly aren’t as prevalent as they used to be and are enough in total to make him an OF2 in standard mixed leagues—whether or not he replicates the home-run power that he showed in 2015. I feel the improvements that he made with his approach will land him in the low double-digits in the home-run department once again in 2016, and the key with Eaton will be if he can once again stay healthy enough to accrue 600 or more plate appearances. Eaton is an even-stronger play in OBP leagues and I think there’s even more stolen-base potential than what he’s shown in his first two seasons with the White Sox, as he stole 44 bases in 130 games as recently in 2012 at the two highest levels of the minors.

If he can stay on the field, Eaton should be able to meet or exceed his 2015 value, which would make him worthy of being selected two or three rounds sooner than he’s currently going. If he comes close to repeating his power output, he could easily sneak into the top 20 at the position once again in 2016.

What are you thoughts as to whether he can stay healthy?