Last week, in our small, quaint town of Splitsville, USA, we broke down the power splits of shortstops. Typical names scattered across the position, but we were also presented with the fact that the best, young bats at the position have very limited sample sizes against both lefties and righties. As you get ready for drafts and daily fantasy, it is important to weigh things like splits and career stats within the context of others at the position.

We turn now to the outfield, which obviously is a very deep position, dependent on your league format. Daily transaction leagues are a great spot to find splits dependent outfielders where you can exploit proper platoon advantage. Daily Fantasy is also a great opportunity to find value when left-handed pitchers toe the rubber and some of the bats listed below get moved to the top of their team’s respective lineup. 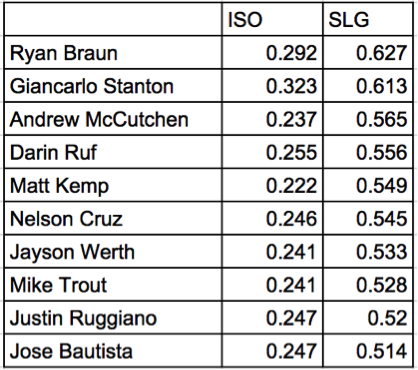 As we survey this list of the top hitters against left-handed pitchers, you see a veritable All-Star team of outfielders. Ryan Braun, Giancarlo Stanton, Andrew McCutchen, Mike Trout, and Jose Bautista are amongst the best, if not the best, right-handed hitters in the majors today. Though they range in talent, they all have great success against left-handed and right-handed pitchers alike. Of this group, Braun stands out as the least trustworthy of the bunch. Braun has seen an increase in power over the past three seasons, but is returning from surgery for a herniated disc in his back.

Stanton, McCutchen, Trout, and Bautista are top options for every fantasy league out there, splits be damned. Stanton’s .323 ISO against left-handed pitchers is flat-out astonishing. His raw, unearthly power is so outstanding, we can only hope he is healthy for 162 games this year.

The interesting names here are Darin Ruf, Matt Kemp, Nelson Cruz, Jayson Werth, and Justin Ruggiano. Each of them have stellar numbers against lefties, but their inclusion here can raise some eyebrows. Kemp, Cruz, and Werth are all elder statesmen in the majors, with plenty of mileage on a variety of injuries and possible power regression. The assumption with Kemp is that his best days are behind him, after injuries 2012 and 2013. Over the last two years though, he’s been able to post solid power output against both left-handers and right-handers alike. The lineup is in flux, and so to may be his future with the Padres.

We touched on Ryan Howard’s high rise in Splitsville, USA a few weeks back, but we know the aging slugger is not long for this rebuilding Phillies lineup. Ruf has shown some high-end upside against left-handed pitchers thus far. In 2015, he slugged .660 against southpaws while boasting a .289 ISO. He was also able to drop his strikeout rate down to just above 15 percent.

When Cruz left the cozy confines of Camden Yards, many assumed his power would dip. What we saw instead was an increase in his overall ISO and SLG. He continues to be a menace against any pitcher on the mound and should still provide plenty of pop in 2016.

After being traded from the Mariners to the Dodgers, Ruggiano became an interesting play in daily fantasy lineups. Against lefties, Ruggiano and Justin Turner became integral parts of the middle of the Los Angeles lineup. His career numbers are buoyed by very strong numbers in 91 at-bats in 2012. Ruggiano is now a fourth outfielder with the Texas Rangers. Time has shown he isn’t that talented against lefties, but is still more than serviceable as a bench bat in your season long league or as a possible punt option in DFS.

That brings us to Jayson Werth. With the Nationals looking to contend this year, they’ll need the outfielder to get back to his heavy hitting ways. His career with Washington has been marked by injuries, so there is inherent risk with the righty bat, but his 2013 ISO of .212 overall is enticing. The biggest issue to keep an eye on here though is a gigantic increase in strikeout rate against southpaws in 2015. In 78 at-bats, Werth dropped down to a walk rate of 7.1 percent while his strikeout pace jumped to 25.9 percent. This alone could be seen as an outlier, but as injuries continue to mount and Werth sits at 36 years old, you have to wonder if his skill set is eroding. 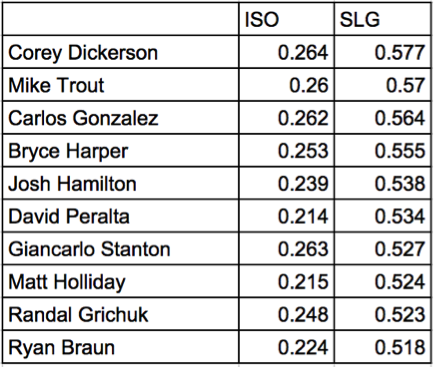 We’ve all gone through the seven stages of grieving for Corey Dickerson leaving Coors Field and now have to decide how we approach him this upcoming year. As you try to break down any batter data, you can often go to far to small sample sizes, but sometimes it can be informative. Last season, in 112 at-bats against right-handers away from Coors, Dickerson boasted a .241 ISO and .527 SLG. To say that leaving Coors will not hurt Dickerson would be foolhardy, but the new Ray has shown the ability to hit away from Colorado.

Bryce Harper, Trout, Stanton, and Braun all are top talents at the position and should continue to rake against pitchers from both sides of the rubber.

Carlos Gonzalez was the Colorado outfielder I was hoping to see dealt. His injury history and somewhat diminishing returns, until 2015, were the prime reasons for trading him away in my mind. Those reasons were probably the same reason it was easier to move Dickerson. CarGo put up monster numbers last year against right-handed pitchers: a .633 SLG and .332 ISO. Is that sustainable? No. But, if, and yes it is a major if, he can stay healthy throughout all of 2016, the Rockies outfielder could be a great value.

Josh Hamilton’s career ups and downs have been well documented. His days of dominating opposing pitchers are long gone. Hamilton does make for an intriguing bench option in a daily transaction league. Hot streaks are hard to predict, but Hamilton could be worth while off the bench or when cheap in daily fantasy leagues.

With Ender Inciarte off to the Braves, David Peralta’s long, strange road to the major leagues should get a longer edition in 2016. He has had a steady increase in OPS, SLG, and ISO against right-handed pitchers in his first two seasons. Playing him in daily fantasy will remain a price-tag-dependent decision early in the year.

To round out our look at right-handed splits we get two St. Louis Cardinals in Matt Holliday and Randal Grichuk. Holliday has had a great career and still could make for some great value in the outfield late in five outfield leagues, but his time as a righty-masher is far behind him. His injuries in 2015 definitely limited his upside, but seeking his consistent production may be a bit of a fool’s errand. Grichuk has a whole lot of raw power but showed very poor plate discipline. His power upside is immense, but the hype preceding him needs to be understood. 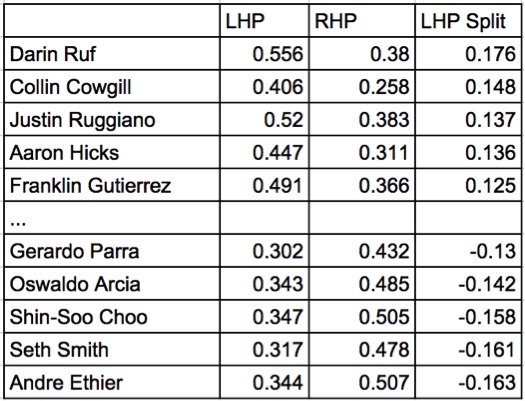 As we’ve done before, we can now look at the drastic lefty to righty splits for eligible hitters. We’ve already discussed Ruf and Ruggiano. Cowgill isn’t someone who should even be considered in daily transaction leagues.

Aaron Hicks will be someone to keep an eye on this season as he heads to donning the Yankee pinstripes. The Bronx Bombers are hoping that Hicks adjusts quickly to Yankee Stadium with his upside against right-handed pitchers.

Franklin Gutierrez is someone to remember in daily formats. Though he has a high strikeout rate, he has always hit lefties well, and 2015 was no different with a .615 SLG and .298 ISO highlighting his success versus southpaws.

From the other side of the dish, we are presented with some very-strong cases for daily fantasy and daily transaction leagues. Gerardo Parra gets a bump in value playing in Coors Field. It’s important to remember that that Coors doesn’t only bump up home runs, but the large majority of hits and runs, too.

Of all of these batters though, Shin-Soo Choo is the name to keep in mind. Choo came on strong in the second half and should be in line for much of the same this season. He isn’t someone you’ll rely on for power per se, but is definitely someone who may provide some proper value at the top of the year.