Last week, we visited the power packed population of third basemen in Splitsville. At the hot corner, we saw many of the names we’d expect with Josh Donaldson, Kris Bryant, Nolan Arenado, Manny Machado, and many other studs appearing. Third base, and first base as well, are typically foundational positions when it comes to the search for power in your fantasy baseball lineups. It is no surprise to see so many of those manning the hot corner as top picks this season. It also is not typically a position you’d want to try to platoon based on daily lineups.

Shortstop, on the other hand, yields a wider gap between the power bats at the top of the position and those toiling away at the bottom of our charts. Even further, shortstop is a position that often sees versatile utility players gain eligibility at multiple positions along with the six. That can open up a great deal of flexibility in your fantasy draft strategy as well as your lineup construction on a daily basis.

In 2016, leagues that use just five games from the previous year for eligibility status will see Orioles’ third baseman Manny Machado eligible at shortstop. That is huge. For our purposes, we are focusing on players with at least 20 games played at the position 2015 and at least 250 plate appearances against left-handed or right-handed pitchers, respectively. 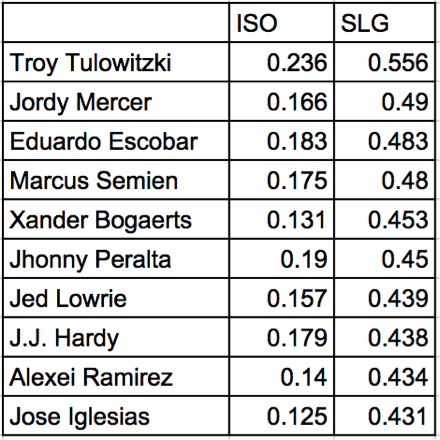 Before we dive into the shortstop splits against left handed pitchers, one note on the overall list of the top 10 here. Notice the stark drop off in ISO as compared to the SLG among these eligible players. Shortstop is clearly not a position you depend on for power, but if you can find the right value for someone with a bit of pop, you may have a leg up.

It’s no surprise that Troy Tulowitzki is atop either of these power lists. Though Tulowitzki can be a maddening shortstop to own, he is still a top talent in a great lineup this year. Throughout his career, he has hit left-handers very well, but you will have to decide whether or not 2015 was the outlier or the new norm. His strikeout and walk rates passed each other in the wrong direction last season and could be a sign of struggles to come if his skill set is diminishing.

Jordy Mercer’s career numbers are boosted by an insane 2014 season against left-handers. Many a daily fantasy owner was lured into his matchups last year just to go on a roller coaster ride of returns. 2016 may not yield regularly playing time for Mercer, so if he isn’t hitting left-handers, he doesn’t hold much value.

Twins shortstop Eduardo Escobar saw a nice bump in his power numbers in 2015, but with that came a rise in his strikeout rate and a dip in his walk rate. While that is often the case, any K-rate over 20 percent for a middle infielder with only mid-range power is something I’ll stay away from every time. Marcus Semien showed a nice tick up over last year across all the necessary stat lines. Though not a gigantic leap forward, Semien makes for an interesting play in the mid 200’s.

You won’t see many bad things written about the Red Sox shortstop Xander Bogaerts. The one small shortcoming to his game may be his power upside, but every other part of his game proves him to be a potential top-five shortstop this upcoming year.

Jed Lowrie joins Marcus Semien in Oakland after being dealt this offseason by the Astros. Houston lost Lowrie for the start of 2015 but enjoyed the breakout of Carlos Correa. In Lowrie’s at-bats against left-handed pitchers last season, he manhandled lefties with a .533 SLG and.267 ISO. A limited sample size should be noticed, as well as a truly unknown playing-time situation in Oakland. If he’s getting regular at-bats around the infield, he could make for a good platoon and daily-fantasy play.

J.J. Hardy had long been a great platoon play against left-handed pitchers, but in 2015 he took a gigantic step back. His career numbers tell you a story of a very strong platoon advantage play while last year shows him to have little value in either way. Much like on Tulowitzki, you’ll have to make a decision on whether you think 2015 is an outlier or a sign of things to come.

Alexei Ramirez showed some major power upside early on in his career with the White Sox, posting double-digit home runs in each of his first four seasons. Over the past four, we’ve seen a dip in power and production for the aging shortstop. In 2015, he had a .102 ISO and .386 SLG in over 100 at-bats against lefties. Ramirez is best left for someone else’s roster.

The Detroit Tigers shortstop Jose Iglesias is much more known for his glove than his work at the dish, but had a very solid year with a bat in his hands. He doesn’t hit for a ton of power as evidenced by his .431 SLG, but has provided enough offense to make his defense worthwhile. 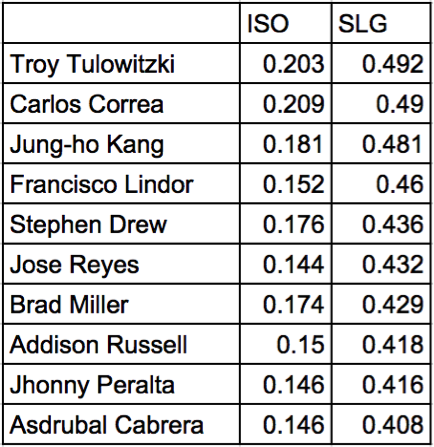 Again, it’s not to see Tulowitzki at the top again here against right-handed pitchers. The Blue Jays shortstop was the top bat at the position for so long that it’s impressive to see who came close to unseating him here.

We get our first glimpse of Carlos Correa here in the right-hander list. Correa didn’t have the requisite 250 at-bats against left-handers to make our matchup list above. In 2015, he hit well against both sides of the rubber and has been a top-10 pick to start this fantasy baseball year.

Jung-ho Kang made his way into the mix at third base, and does the same here at shortstop. As we discussed last week, we’re not sure what Kang’s injury status will be heading into 2016. He is another bat with the potential for upside against left-handed pitchers as well, but samples need to grow for us to understand what kind of bat he’ll be.

The Cleveland Indians were pleasantly surprised by the emergence of Francisco Lindor’s bat in 2015. An upside glove, he far exceeded expectations from both sides of the plate. His power numbers can’t be assumed coming into 2016 as he rarely showed power in the minors. Lindor will make for an interesting case of average draft position review come midseason.

Stephen Drew’s appearance on this list is a testament to how good he has been against right-handed pitchers leading up to the last two seasons, because Drew has had back-to-back awful offensive years. He’s now a part-time utility man for the Washington Nationals and has extremely limited appeal.

We have long wanted to bury Jose Reyes. We blamed the injuries. We blamed the age. Now we blame the team. But, the speedster has shown enough slugging against right-handed pitchers over his career that his full-time play in Colorado should make him an interesting play this year, especially in daily fantasy.

The Chicago Cubs went through a rough stretch for a while, but their youngsters are primed to be some of the best in baseball for years to come. Addison Russell joins a youthful core as one of the more exciting young hitters in the game. Much like Correa and Lindor before him, Russell didn’t see enough at-bats against left-handers in his career to qualify for our other list, but he shined here against right-handers. Russell will be a coveted shortstop this year, but lets not lose sight of his high strikeout rate. With great power comes great responsibility: not striking out so much.

Asdrubal Cabrera takes on the full time shortstop duties for the Mets this year. While his real life contract seemed a bit on the high end, he still brings some value from the left side of the plate. He has had double-digit home runs from the left side each of the last four years and is currently going in the low 300s in drafts. 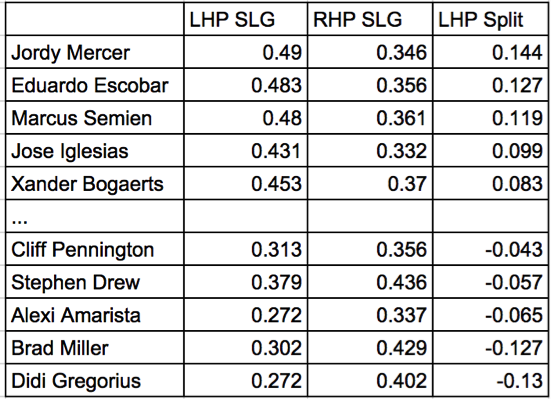 There are no real surprises in the top half of our chart here. We discussed earlier how Mercer, Escobar, and Semien all fared against left-handed pitching. Of the top three, Semien seems to be headed for repeatable returns on his career slugging percentage. He joins Danny Valencia and newly reacquired Jed Lowrie as potential right-handed stacks when Oakland faces a left-handed starter.

Brad Miller is an intriguing member of the bottom of half of this list. He has struggled mightily against lefties throughout his career. That struggle may keep him from landing the full time gig at shortstop for the Tampa Bay Rays. For our purposes here, Miller platooning at shortstop would be a win as his ADP would stay down and open up the potential to use him as a platoon move in daily lineup leagues.

You need to be logged in to comment. Login or Subscribe
pandamans
Who are we talking about here?: "The Detroit Tigers shortstop is much more known for his glove than his work at the dish, but had a very solid year with a bat in his hands. He doesnâ€™t hit for a ton of power as evidenced by his .431 SLG, but has provided enough offense to make his defense worthwhile."
Reply to pandamans
dstrafford
Jose Iglesias.
Reply to dstrafford
pandamans
I guess I was confused because .431 doesn't seem like the right slugging percentage for Jose?
Reply to pandamans
pandamans
ah. the splits. the splits. slinks backwards out the door.
Reply to pandamans
dstrafford
hahaha. No worries at all. It is an interesting exercise to look at

Reply to dstrafford
davinhbrown
Yea, Mercer had some video-games like #'s against lefties that one year.

Made him awesome in, um, uh video games that year.
Reply to davinhbrown
dstrafford
Yup, in 2013 he hit over .400 against lefties with a .692 SLG% and .282 ISO. Obviously in no way sustainable but owners still continued to chase them a full season later.
Reply to dstrafford