Last week in the remote town of Splitsville, USA, we took a look at the platoon power splits of our second base population coming into the 2016 season. In previous weeks, Doug Thorburn took a closer look at first base and catchers, as well. This time around we get to dive into the hot corner. Third base is a position dominated by righty power bats, so finding the most platoon-friendly ones among them will be interesting.

Second base gave us some interesting names to ponder with some stark splits and recent trends that could point in opposite directions. The likes of Chase Utley and Neil Walker could have seemed like options if the platoon was in their favor, but it’s so very important to remember that any one piece of information or statistic is just part of a case for drafting or using a major leaguer in your fantasy lineup. Things like ISO splits can help paint a picture of a player, but shouldn’t be considered to be the Mona Lisa on their own. 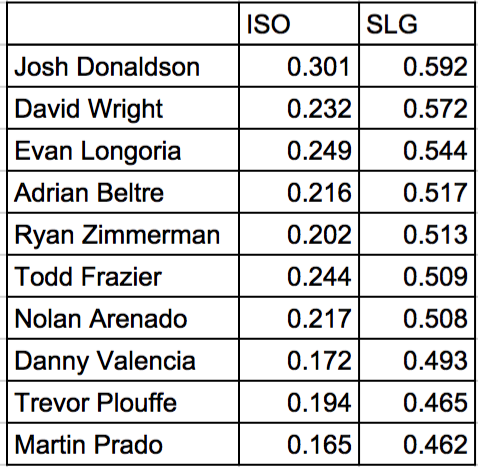 It seems like a simple premise, but obviously the vast majority of third baseman bat from the right side of the dish. This isn’t to say that we don’t have a few left-handed bats that throw right handed or the occasional switch-hitter at the hot corner, but more often than not, third base is occupied by power-hitting right-handed batters. Our list above is a mixed bag of the top options at the position this season and starts from yesterday who are fading.

What can we say about the reigning American League MVP that hasn’t already been said heading into the 2016 season? Donaldson has shown throughout his career that he can hit both left-handed and right-handed pitchers, so it’s no real surprise to see him topping this list. He’s not someone you are going to sit against righties, but is someone to most definitely target in daily fantasy when he draws a league-average lefty matchup.

Beyond Donaldson, third base gives us more of a walk down memory lane than an actionable forecast for things to come in 2016.

David Wright’s career splits should not be used as information indicative of the 2016 season. Wright’s injury history and steep decline over the past two years has shown that he is not the hitter he once was in the power department. Even further, Wright’s 2015 numbers were accumulated over a small sample and should not be extrapolated over a longer time period. It’s tough to see some of our stars fade, but he won’t be an option for daily fantasy unless his price tag and matchup dictate it.

Evan Longoria has always hit left-handers well. In 2015, he, along with righty bats like Logan Forsythe in the Rays lineup, was a top target when his price was depressed in daily fantasy. The hot-corner defender makes for an interesting platoon in daily leagues, as his power continues to decline against right-handed pitchers. His HR:FB rate dropped down below 10 percent last season for the first time in his career. You won’t get Longoria at enough of a discount to leverage him in a platoon, but some creative ownership may lead to an upside lefty third baseman late in the draft just in case.

Father time has started to catch up with Adrian Beltre. He’s seen a dip in his overall power output but continues to be very solid against southpaws. He had a .241 ISO in 2015 against lefties compared to only a .128 ISO against RHP. The fall off his fairly dramatic for Beltre, though there is a small sliver of hope some of his struggles came from a lingering wrist issue he had taken care of in October. Ryan Zimmerman falls into the same category as Beltre, but his right-left splits are even more drastic. The Nationals veteran had a other-worldly .351 ISO in 91 at-bats against lefties in 2015. In 255 at-bats against right-handed pitchers, he only managed a .169 ISO. Zimmerman, much like Wright and Beltre, will still be overdrafted due to his name value and previous accomplishments.

The bottom five on our list of top slugging third-base-eligible players form an interesting group of potential top draft picks and platoon guys for daily transaction leagues and targets in daily fantasy. Todd Frazier took a big step forward in his power against all pitchers in 2015 with a very even year against both lefties and righties. A move to Chicago shouldn’t drastically change his value this year. Nolan Arenado did the balancing act between his road and home splits in 2015 but hit right-handers for a much higher ISO and SLG. If the young Colorado third baseman can bring his left/right splits from 2014 and 2015 into close alignment in 2016, Arenado may be able to exceed his already-elevated draft position.

Danny Valencia’s career slugging percentage against left-handers is propped up by a big 2014. He did get a decent boost moving to Oakland in 2015, as he hit cleanup against lefties at times. This is a big boost to his daily fantasy value as long as his price tag stays depressed. Trevor Plouffe and Martin Prado, along with Valencia, finally get into possible platoon plays in your season long fantasy leagues as you will easily be able to grab them as bench assets. 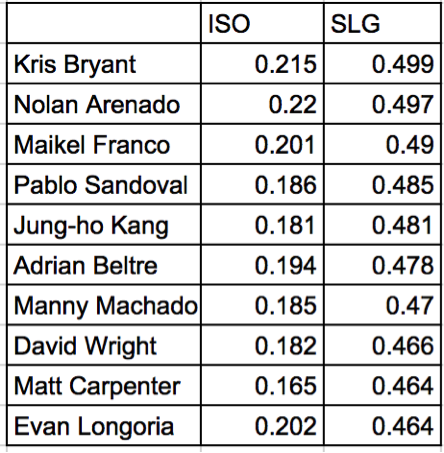 As we discussed earlier, third base is a fairly right handed dominated position, but you’d still think you would see a few more left-handed bats make their way toward the top of this list. We do see Cubs third baseman Kris Bryant for the first time. It’s not that he hit poorly against left-handed pitchers, he just fell below our top 10 cutoff here for slugging percentage. We all know that he is a dynamic hitter who will succeed against pitchers of all types.

We discussed Arenado’s home/road and lefty/righty splits earlier. He is someone who will be a major target for DFS this year but be aware of the price tag boost you often see at Coors Field. He may be one of the best players to target those first couple of games away from Colorado.

The next three hitters are intriguing for differing reasons. Maikel Franco didn’t qualify for our left-handed matchup as he has fewer than 250 at-bats against southpaws. He showed quality power against both right-handers and left-handers last year. His minor-league numbers show him to be a legitimate power threat and he may go overlooked with Machado, Arenado, and Bryant all being so highly sought after. Pablo Sandoval has been a colossal disappointment since moving to Boston, so his career proficiency against righties is tough to contextualize. He has never been a huge raw power guy, but his 2009 and 2011 seasons seem light years away. Sandoval is someone you will get at a discount this year, so if you believe he will turn back the clock even the slightest bit, he may pay off for you.

Jung-Ho Kang and Matt Carpenter are the two other names we haven’t touched on yet. Kang showed signs of the power he had before coming to the majors. His .481 slugging percentage is a good sign of things to come if he cements regular playing time in the Pirates lineup. He is coming off an injury that may keep him from being ready for the start of the year. Carpenter took a big jump in the power department in 2015. Known for mainly being a contact, gap-to-gap type hitter in the past, the Cardinals third baseman hit 20 home runs and 33 doubles off of right handed pitching last season. Carpenter is a great option for anyone looking to focus elsewhere in the first four or five rounds of the draft, but most likely isn’t someone you’d be looking to sit against lefties in daily leagues. 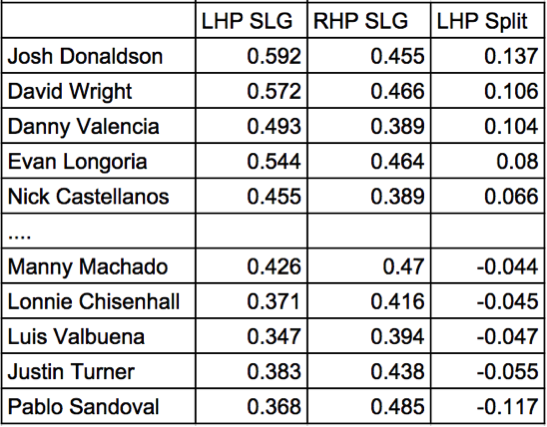 Of the top five in left-handed pitching splits, Nick Castellanos and Danny Valencia show the largest drop off over their career when facing a right-handed pitcher. That isn’t insignificant when trying to decide on either of their viability as a full-time option at the hot corner. Both will make for early season daily fantasy options when facing a left-hander. We discussed David Wright at length earlier and recognize his career stats as historical documents at this point.

Josh Donaldson isn’t someone you need to concern yourself over with platoon splits. He is a versatile slugger who hits as part of a great lineup and 81 games in a great home park. We also touched on Longoria at length earlier. He is not as far along the downward slope of his career as Wright, but your expectations for his ceiling in 2016 has to be conservative.

Machado is a young hitter who is slowly figuring out his power swing. His struggles against lefties and away from Camden Yards should slowly fade away as his career continues. He’s an elite level talent.

Chisenhall is making the transition into the outfield full time this year, but still holds third base eligibility. With Brantley out to start the year, Chisenhall may be worth monitoring against right-handed pitchers. Luis Valbuena hit 25 home runs last year, with 20 of those coming off of right-handers. He strikes out way too much to trust him to any large degree, but his power upside could make for a good bench candidate in daily transaction leagues.

Justin Turner was a daily fantasy darling in May, June, and July of last year when facing left-handed pitching. It will be interesting to see how the Dodgers use the variety of infielders they have this season. Turner should continue to be used in daily fantasy when the matchup is to his advantage.

You need to be logged in to comment. Login or Subscribe
yancyeaton
Saving this article for future reference. I love the splits breakdowns, Dan. Excellent work.
Reply to yancyeaton
ares1800jr
In a league with daily lineups and large rosters, how much value do you think you could get with Platooning Turner and Valencia? Both being ranked outside top 15 in majority of 3B ranks(outside top 20 in someplaces). Is it plausible to assume that an active owner using that strategy can get the value that a Beltre, Duffy, Moosetacos would bring with a set it and forget it approach? I was thinking about going cheap at 3B and spending auction money elsewhere.
Thanks Dan
Reply to ares1800jr
dstrafford
The only issue I have with those two is their career points towards being LHP split dependent. For the sake of the argument, let's say they face LH starters 1/3 of the year. Even if you could play them each during their respective 1/3 of the time, you are taking a major risk that you get nearly nothing that last 1/3 due to their struggles against RHP.

That is the really pessimistic view.

Looking from a value perspective, if you can hold off on any position in a deep league that you feel has bottom end value and get decent upside return, say 15-20 home runs, 70 RBIs, 60 runs scored while paying very little, I wouldn't be against it.

Auction strategy would be interesting here on whether or not to post them early to get them cheap or just let them sit until most have already filled roster spot.

Do you play a CI as well or just around the diamond positions?


Reply to dstrafford
ares1800jr
12 team league, We have CI, MI, Util to go with diamond positions as well s 2 CF and 3 OF. I was thinking using the CI with a Hosmer like 1B. Could always pick up Eugenio Suarez to play when both sit and give me depth at SS.
Reply to ares1800jr