Dozier was selected in the eighth round (252nd overall) of the 2009 draft out of the University of Southern Mississippi, six picks behind fellow fantasy darling Paul Goldschmidt. Dozier hit .355/.426/.491 over his four years in Hattiesburg, hitting just 16 home runs over a collegiate career that spanned 864 at-bats. His raw slash line looked fantastic, but the lack of home-run pop in what was a prolific offensive era in the college game cast doubts on Dozier’s long-term role with the Twins.

Minnesota assigned Dozier to the Appalachian League after being drafted, where he hit for a .353 AVG—but no power—in 248 plate appearances that included just three stolen bases along with his zero homers. Dozier split the 2010 season, his age-23 campaign, between the Midwest League and Florida State League, where he hit for a decent average (.275), and started running (16 steals in 21 attempts), but continued to struggle to hit for power, hitting just five home runs in 580 plate appearances. Dozier advanced to Double-A in 2011, where he finally starting putting things together at the plate, hitting .318/.384/.502 in 351 PA (with seven home runs) and stealing 11 bags in 18 attempts. Dozier moved up to Triple-A Rochester in 2012, where he didn’t really hit much (.623 OPS in 200 PA), but still earned the call to Minnesota in early May.

Dozier struggled in the majors over the rest of the way in 2012, hitting for a .234 AVG in 340 plate appearances, but the seeds of fantasy intrigue were planted as he hit six home runs and stole nine bases. Dozier put himself on the fantasy map in 2013, as he hit for a .244 AVG with 18 home runs and 14 steals and the Twins second-sacker took another step forward with the bat in 2014, joining the exclusive 20/20 club in smashing 23 home runs along with 21 steals—but still hitting for a lackluster .242 batting average. Dozier also scored 112 runs, which led the position and placed him second overall behind the then relatively unknown Mike Trout.

Dozier smacked a career-best 28 home runs (most at the position), marking the third straight year his total increased, which helped him post a .209 ISO, also a career high. He also crossed the plate 101 times, which was also the most of any second baseman. His stolen-base total of 12, although a dropoff from his 21-steal output in 2014, placed him in a tie for seventh at the position. According to Tout Wars maven Mike Gianella, Dozier earned a very healthy $21.54 for the year, helped by his 77 RBI, second at the position.

As Dozier’s power numbers have crept forward in each of his three full seasons, his batting average and on-base percentage have each taken a step back from his first full season in 2013. His .236 AVG was well below the league average of .261 at the position,and his .307 OBP was 27th among second basemen who received 300 or more plate appearances, putting him behind the likes of fantasy stalwarts Ryan Goins (.318) and Jace Peterson (.314). Dozier’s 21 percent strikeout rate was also his highest as a professional. 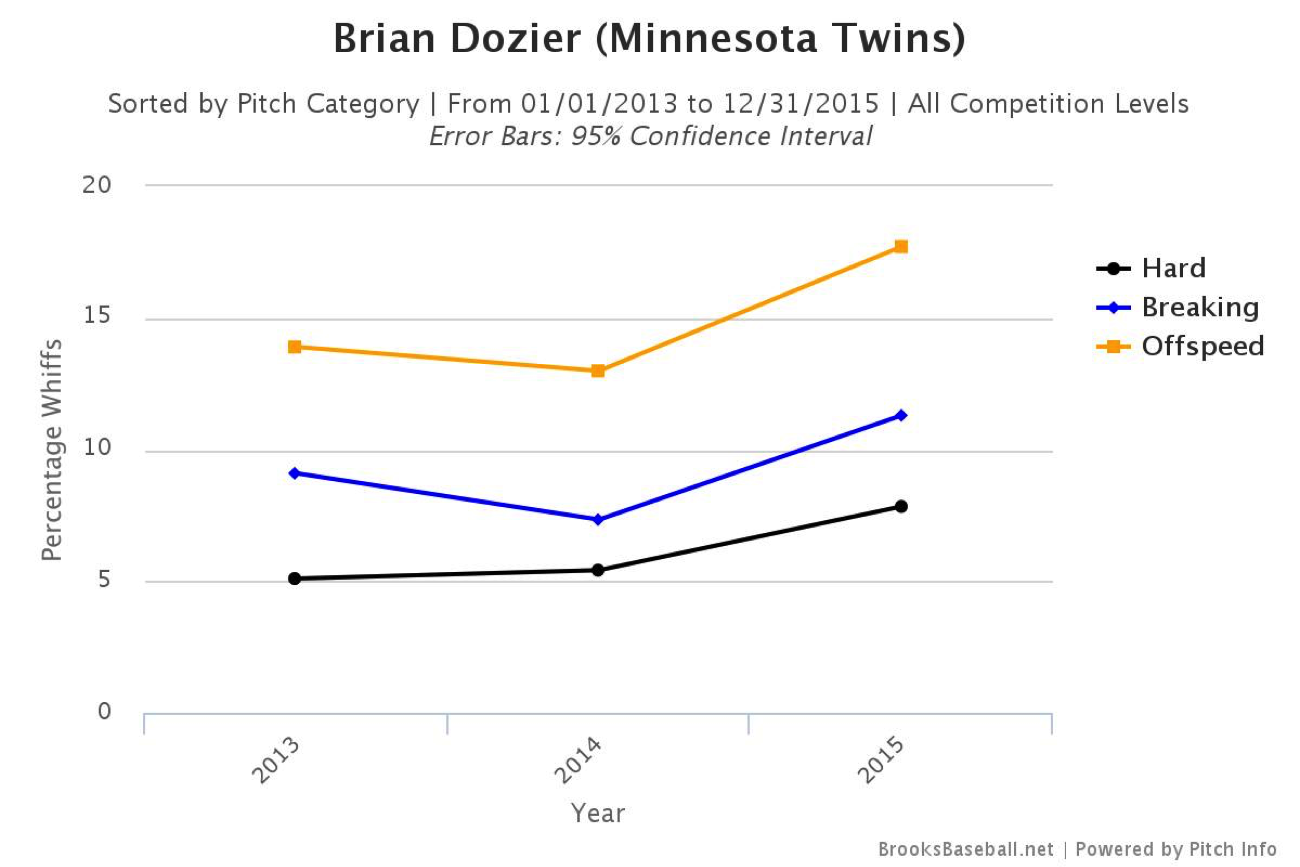 As the numbers above indicate, Dozier swung and missed at career-worst rates on all pitch types in 2015. I think it’s safe to say that qualifies as a thing that went wrong for him this season. His 79.8 percent contact rate marked the first time he registered below 80 percent in the majors and was down a good chunk from the 84.4 percent clip that he posted in 2014. His popup rate of just under 12 percent was the worst of any second baseman who went to the plate 400 or more times.

Over the last two seasons, Dozier has hit 51 home runs, which outpaced second-place finisher Neil Walker’s total of 39 by a wide margin. Dozier sold out for power in 2015, and he’ll likely do the same as he ages. His 33 stolen bases over the last two campaigns puts him in a tie for fifth; he isn’t getting close to Gordon or Altuve, but there’s no shame in that. He seems like a pretty safe bet to once again hit in the .240 range and hit 20 or more home runs with a double-digit stolen base total. He also should score a boatload of runs hitting in front of Miguel Sano and company in what should be an improved Twins lineup. However, his value takes a bit of a hit in OBP leagues, as it’s probably not prudent to expect much improvement above his career .314 mark, which was just below the league average of .315 for the position in 2015.

On Wednesday, I ranked the Twins second baseman, who is unfortunately not the son of Coach Vernon Dozier, seventh over the next three seasons at the position. After taking a closer look at his declining contact rates and batted-ball profile, three years is about the duration for which I’d be looking to invest in Dozier. I get a very Dan Uggla-like vibe (or Dan Struggla, as I prefer to call him) with Dozier, as I think it will likely be a very rapid decline for him when his power starts to go, especially from a fantasy standpoint, and even more so if he runs less as he ages.

In standard-mixed redraft leagues, Dozier should provide plenty of value in 2016, as he was one of only two second basemen to hit 20 or more home runs in 2015, and he should provide additional value with his legs—both in the stolen-base and runs-scored categories. I just wouldn’t plan on too much of an improvement in the batting average or on-base categories and accept Dozier for what he is—a low-AVG/OBP masher who should be near the top of the position in the other four fantasy categories.

You need to be logged in to comment. Login or Subscribe
lipitorkid
Everyone talks about the lack of power stats and SBs in fantasy, but Runs is a brutal stat too. Being able to bring home over 100 runs is super valuable. Just think, both Kipnis and Altuve only scored 86 runs.

His college and early minor batting average speaks to some special skills with the bat, he has made some very deliberate decisions with his approach, which the Twins support via his lineup position. Don't mistake his love AVG for someone just flailing at the plate.
Reply to lipitorkid
lipitorkid
I wish you could edit replies. Obviously, "Love" AVG is not a new stat.
Reply to lipitorkid
jansonsjj
I would be strongly in favor of "Love AVG" as a new stat.
Reply to jansonsjj
jthom17
Dozier has faded badly in both second halves last two years. He has 37 HR/25 SB in first halves & only 14 HR/8 SB in second halves of 2014 7 2015.
Reply to jthom17
lipitorkid
What do you think is causing this?
Reply to lipitorkid
BomboRiviera
I wonder how much the hip injury he was dealing with in the second half affected his performance.
Reply to BomboRiviera