The Canadian was selected 16th overall in the 2008 First-Year Player Draft by the Milwaukee Brewers, but he never made it to Miller Park. He was traded north of the border to Toronto for veteran right-hander Shaun Marcum prior to the 2011 season. Lawrie then lit the fantasy baseball world on fire at the age of 21, hitting .293/.373/.580 (.327 TAv) with nine home runs and seven stolen bases in just 171 plate appearances over 43 games late in the 2011 season. Seemingly on the precipice of a monster breakout, he never realized those hopes over the next three years, instead dealing with myriad injuries and failing to live up to the substantial hype he generated in fantasy circles.

Toronto’s new team president and CEO Mark Shapiro reportedly wasn’t a fan of former GM Alex Anthopolous trading away a majority of the team’s top prospects, but he should have been able to overlook that considering the most beneficial of those deals involved sending Lawrie, highly touted shortstop prospect Franklin Barreto, and pitchers Sean Nolin and Kendall Graveman to Oakland for third baseman Josh Donaldson, who proceeded capture the AL MVP award this past season. Despite playing in a career-high 149 games in 2015, Lawrie was traded (for the third time in his brief career) to the Chicago White Sox for a pair of minor-leaguers this offseason.

The major bugaboo with Lawrie over the first three full seasons of his career was his inability to stay healthy, as he missed an astounding 178 games to a cavalcade of injuries. He managed to avoid the disabled list during his one-year stint with Oakland, hitting .260/.299/.407 (.266 TAv) with a career-high 16 home runs and five stolen bases in 602 plate appearances. He also maintained his second-base eligibility, which makes his power upside even more attractive fantasy-wise than it would have been at the much-deeper hot corner.

It’s easy to look at the career-high 16 homers as a step forward, but they were largely the result of renewed health, which produced a significant increase in plate appearances. A closer examination of Lawrie’s batted-ball profile reveals that he’s still hitting far too many groundballs to ever fully realize his lofty power potential.

The raw statistics don’t do it justice. To better visualize the batted-ball issues, let’s analyze Lawrie’s spray chart dating back to the start of 2012, courtesy of Brooks Baseball: 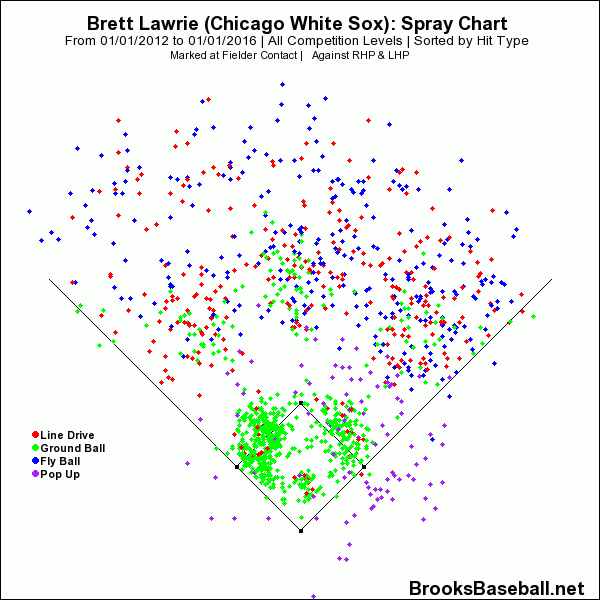 What stands out almost immediately is the sheer volume of groundballs pulled to the left side of the infield. As it stands right now, Lawrie is simply not hitting enough flyballs. Of the 37 hitters who posted a higher groundball rate than Lawrie (49 percent) last season, only four (A.J. Pollock, Ryan Braun, Russell Martin, and Shin-Soo Choo) hit 20-plus home runs, which underscores just how difficult (and unusual) it is to hit for power when you’re burning that many worms.

A more ancillary concern is the significant dropoff in his contact rate, which fell from an 81 percent average over the previous three seasons to just 74 percent last season. Even with a career-high .320 BABIP, Lawrie managed to hit just .260 as his strikeout rate skyrocketed to nearly 24 percent last year. Considering that he struck out in just 16 percent of his first 1,431 career plate appearances entering last season, it’s a significant development, especially for a power hitter who rarely draws free passes.

Seen as a rare dual-threat prospect, possessing elite power and solid wheels, Lawrie isn’t running anymore even when he gets on base. Clearly, injuries have taken their toll, sapping his once solid stolen-base potential. It could be a case of avoiding a potential injury risk, but he attempted just seven steals in 149 games last year.

It’s hard to envision a more optimal landing spot for a right-handed power hitter than U.S. Cellular Field in Chicago. By my esteemed colleague Greg Wellemeyer’s 2016 park factors, Lawrie will transition from the fifth-worst venue for right-handed power in Oakland to the third-best AL home ballpark in 2016. If he stays healthy for the entire 2016 campaign, the move to a much more favorable location on the junior circuit alone could be enough to propel Lawrie over the 20-homer threshold for the first time in his career. Even if his batted-ball profile remains the same, there is a reasonable chance that he hits for enough power to finish as a top-10 fantasy second baseman. Staying healthy will be the biggest obstacle.

The margin for error in his profile is becoming dangerously slim. Eroding plate discipline, evaporating speed potential, a ground ball-heavy batted ball profile that caps his power upside and a lengthy injury history are significant detractors. However, it’s nearly impossible to overlook the significant fantasy impact he can have at second base if he makes a few adjustments going forward. Even a slight uptick in flyballs would instantly transform Lawrie into a legitimate candidate to eclipse the 20-home-run plateau, a feat only a pair of second basemen (Brian Dozier and Robinson Cano) accomplished last season.

Despite all of the warts in his long-term profile, the immediate power upside is real. By early National Fantasy Baseball Championship (NFBC) average draft position (ADP) data, Lawrie is currently being selected as the 17th second baseman (16th round) off the board. At his current ADP, there is virtually no downside on a gamble that relocating to Chicago results in a power surge. The 26-year-old is a prime target for savvy fantasy owners hankering for power from a middle-infield spot in the late rounds of deeper mixed leagues going forward.