After J.P. Breen covered saves on Monday, and George Bissell looked at holds yesterday, we come to the end of our Fantasy Categorical Breakdown Feature today with my breakdown of the quality starts landscape across the league. We thank you for following along over the last couple of months, and look forward to what’s to come after the New Year.

Though baseball in general has almost completely moved away from the win statistic, fantasy baseball lags behind a bit. However, we’re seeing more and more leagues move away from that stat and replace it with quality starts. Now, it’s not like quality starts are a perfect statistic—the very definition is set up arbitrarily, and it still relies on a few too many outside contextual factors—but it’s a definite improvement over wins. While good pitchers can get destroyed by playing on a bad team with wins, they should still get their fair share of quality starts.

Before I get into the strange trends regarding this statistic, let’s look at a couple of conflicting theories about how the landscape has changed over the last few seasons. On the one hand, we’ve seen the run environment decline across the league. It’s common sense that when teams are scoring fewer runs, more pitchers should be going at least six innings while allowing no more than three runs. On the other hand, we’ve seen a clear change in strategy over the last couple of years in which teams are removing their starters earlier and earlier. With deeper bullpens and a better understanding of how much offenses improve on their third time seeing a pitcher, fewer and fewer pitchers are even making it through six innings a night. So, with those two conflicting pieces of information, I really wasn’t sure how the quality start landscape has changed over the years, if at all.

With this in mind, I went through Baseball-Reference’s Play Index tool and looked at all the pitchers who got at least one quality start in each of the last 10 seasons. I charted how many total quality starts were tallied in each season, and how many pitchers accrued at least one of them. The results were surprising and interesting: 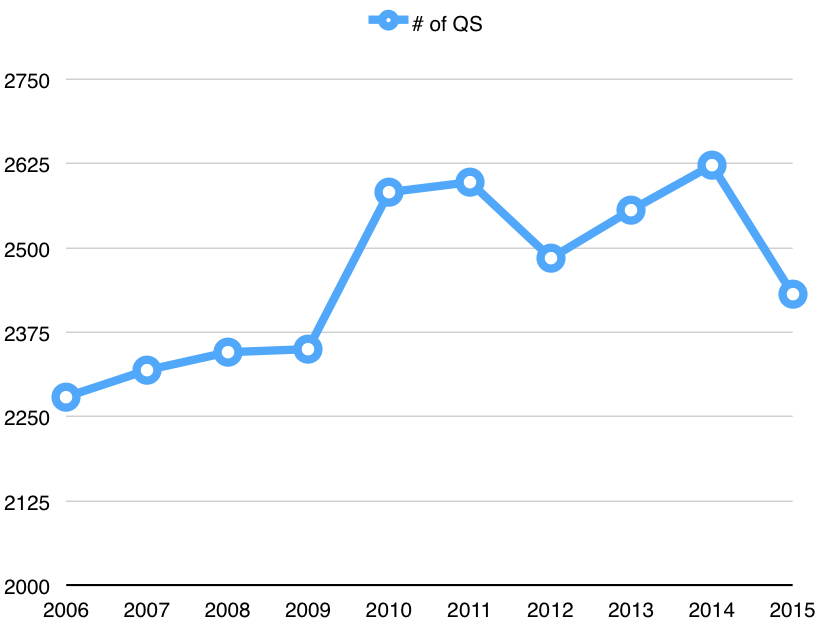 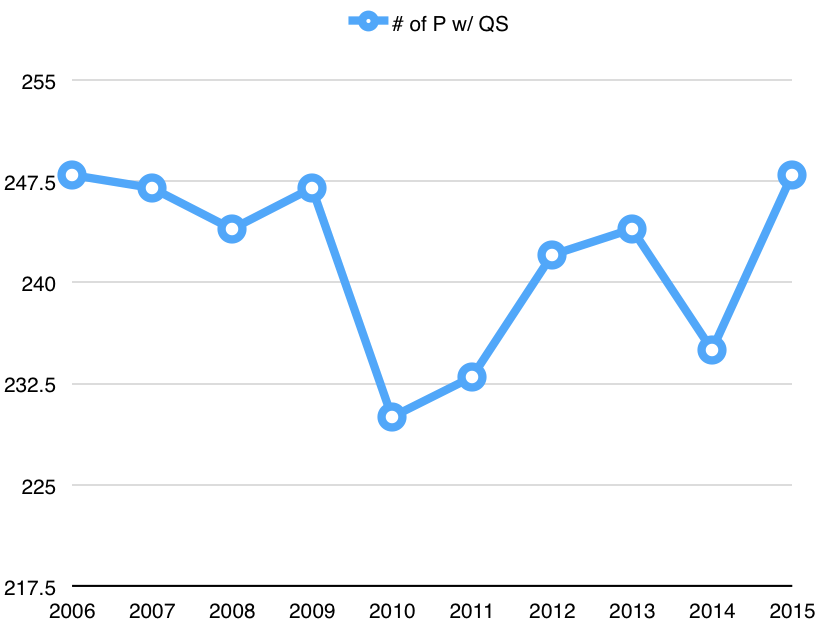 As you can see, these two trends were almost perfectly inversely proportional. When the total number of quality starts across the league was at its lowest, the number of pitchers getting at least one was at its highest, and vice versa. It wasn’t what I expected to see to say the least. All of this indicates that the overall landscape on a year-to-year basis is heavily influenced by the elite at the top end of the leaderboard.

A quick check on the numbers backs this theory up. Last year, the total number of quality starts was down, but the number of pitchers with a quality start was up. Looking at the top-end of the leaderboard, only 28 pitchers had at least 20 quality starts. In 2014, on the other hand, the trends were going the opposite ways. In that season, 46 pitchers tallied at least 20 QS. In 2012, which mirrored 2015 in terms of the trend lines, 32 guys had 20. Meanwhile, in 2010, which mirrored 2014, 45 reached the 20 QS mark.

All of this is to say that it’s really hard to predict how the league is going to trend in this category on a year-to-year basis. There’s been no clear-cut pattern on the whole, and there’s no way to predict how many pitchers will be in the upper echelon. With that being said, the two qualities you want to look for if you’re looking for help here are durability and run prevention. Obviously, the more starts you make the more quality starts you will get. Run prevention is a little harder to predict, but players who regularly outperform their peripherals will be a little underrated here.

Regardless, no matter how hard you may want to prepare for this category, it’s really one that comes together from focusing elsewhere. Unsurprisingly, this is a statistic that is dominated by the pitchers who find themselves atop the other leaderboards. There’s not really any way to do well here besides simply being a really good pitcher. When you target the elite pitchers in the other categories—particularly ERA—you’re going to get the high-quality QS arms. It’s just really hard to predict how many of those guys will be available on a year-to-year basis.

You need to be logged in to comment. Login or Subscribe
jfranco77
Having said that, I think there's some value in avoiding the lesser Cubs (Hammel, Hendricks... and I'm not sure about Lackey) given the presence of Joe Maddon and their cavalcade of multi-inning relievers (Warren, Cahill, T Wood, Richard).

I might also look askance at the Red Sox with their uber-bullpen of Kimbrel/Koji/Smith/Tazawa and wonder if they'll have a quicker hook on the non-Price starters.
Reply to jfranco77
redsoxthoughts
Yeah, the Cubs and the Rays are probably the two teams I would avoid here, all else being equal. I'm not very high on the Red Sox pitchers outside of Price super bullpen or no super bullpen.
Reply to redsoxthoughts
krisarthur
I think that's the most disappointing thing about the off-season for the Red Sox this year. They really need another ace/great #2 starter I think to compete this season. Without that they have too many question marks. They blew Margot on reliever (great one) but copy the Cubs here and save some money and put together a pen that way instead....

I think they need more than Price... that's for sure!