You didn’t think the Baseball Prospectus fantasy team was only going to discuss standard 5×5 categories as part of our Fantasy Categorical Breakdown series, did you? After tackling nine of those ten already, I’m here to introduce the OBP category. J.J. Jansons and Wilson Karaman have my back with the over/underachiever and deep dive later this week. 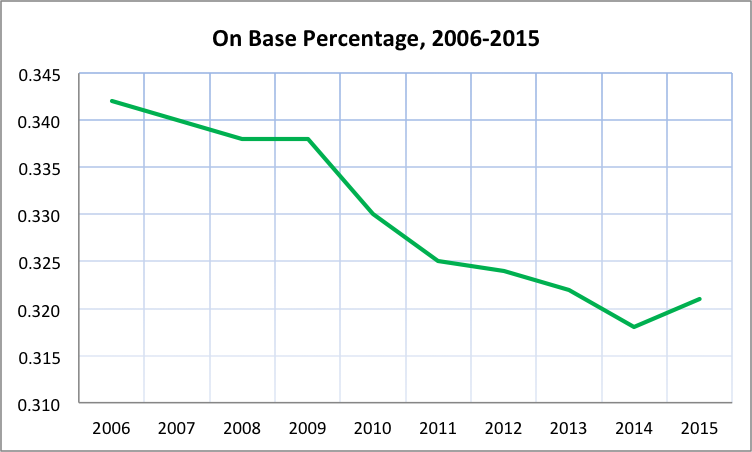 Batting average (non-pitchers only) increased from .255 to .258 from 2014 to 2015 and on-base percentage experienced the same three point increase, from .318 to .321. Allow me to connect those dots for you: walks were basically flat, year-over-year, and remain at a historically low level. The 7.82 percent walk rate that major-league hitters posted in 2015 was a few ticks better than 2014’s modern-day low of 7.78 percent, but is nearly a full percentage point south of where it was just five years ago. For decades, the league-wide walk rate has hovered just below nine percent, occasionally eclipsing that mark. Excepting 2015’s immaterial increase, walk rate has been steadily decreasing since 2010 and you can see the correlated result in the OBP graph above.

Batters swung at 46.9 percent of pitches in 2015, the highest annual number in the PITCHf/x era, in spite of the fact that pitchers are throwing in the zone at an all-time-low rate. 2015’s hitters made contact just 79.0 percent of the time, also the lowest rate since PITCHf/x began tracking pitches in 2007. An increasing swing rate and decreasing contact rate are four and five-year trends, respectively, and while there is a limit to how much more it can reasonably worsen, there has been a clear change in approach over the past several years. Without a sudden return to late-2000s form at the dish, it’s difficult to see how OBP will move much from the level we’ve seen the past few seasons.

While the league-wide OBP number was almost flat from 2014 to 2015, it’s interesting to compare the top of the leaderboard for the two years (qualified hitters only).

Three players snuck over the .400 mark in 2014 but 2015 had a pair closer to .500 than .400 and another couple that would have led the league in 2014. Together, the four best OBP performances in 2015 account for a quarter of the top 16 highest qualified OBPs over the past decade (Chipper Jones in 2008 is the answer to the trivia question). Three of those four—Harper, Votto, and Goldschmidt—played full, healthy 2015s after missing part of 2014 with injuries. It is unwise to expect any of the three to repeat the incredible heights of 2015, but each should push well above .400 again and deserve and extra buck or two if you play in an OBP league, because of the potential comparative advantage each presents relative to the rest of the league.

Interestingly, while the OBPs of players ranked 7-20 doesn’t differ much from 2014 to 2015, there isn’t much intersection in the list of players. McCutchen, Bautista, Rizzo, Brantley, Trout, and Cabrera were the only players to achieve top-20 status in each of the past two seasons. Some of that is selection bias in the sample, given that I’m only including qualified seasons. The kinds of players who are likely to post a league-leading OBP are typically older veterans and/or big-bodied corner players who have a hard time staying on the field for 500+ plate appearances. Unlike a category like strikeouts, for example, where predicting a repeat performance is somewhat easier, there’s not nearly as much crossover in the league’s OBP leaders from one year to the next. The players who are most likely won’t come cheap, for reasons both related and unrelated to OBP, but again, it’s worth paying up for the elite production.

You need to be logged in to comment. Login or Subscribe
lowguppy
Since this list is dominated by 1B/OF, think you could do a positional breakdown on OBP in a follow up column?
Reply to lowguppy
jfranco77
Seems strange that it's not more predictable YoY. I guess it's because of BABIP, since BB% is generally pretty stable.

Might be better to focus on guys with good BB% and hope the BABIP gods are friendly.
Reply to jfranco77