As the BP Fantasy Team boldly pushes forward in our Fantasy Categorical Breakdowns series, be sure to catch up with previous installments over the past couple of weeks. We’re providing a 10,000-foot view of each category—such as this article here—to go with a specific article on 2015 over/underachievers and another one targeted for deeper leagues. This series is tackling two birds with one stone: (1) breaking down individual player performances; and (2) re-calibrating the fantasy discussion by placing roster strategy at the center.

The prevailing narrative surrounding Major League Baseball in recent years has been that more teams are running because offense, more generally, has declined. That lack of power has supposedly caused teams to look elsewhere for run production, namely the basepaths. Such a narrative seemingly had legs in 2011 and 2012; however, as we witnessed in 2015, the lower run environment didn’t lead to more stolen bases. In fact, the number dropped dramatically. 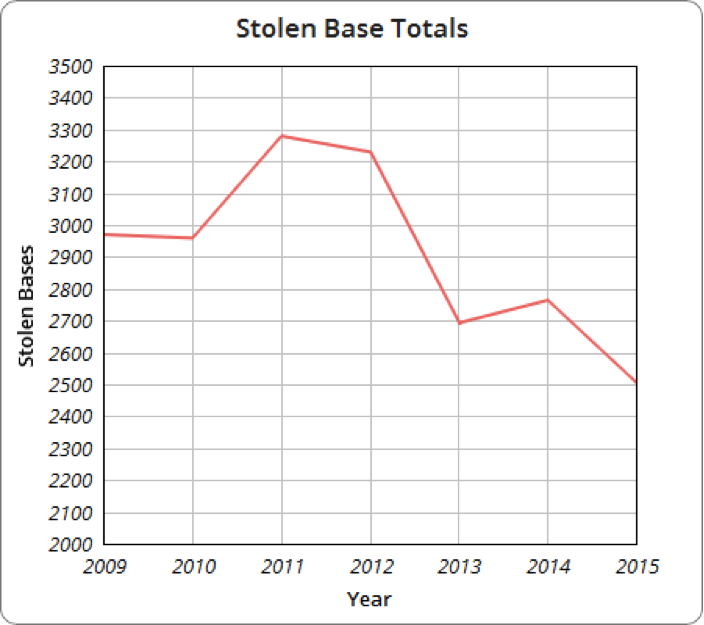 Aside from the strike years of 1981 and 1994, this past season had the lowest stolen base totals (2505 SB) since 1974 (2488). At first, it appeared that this was because the league had the third-worst OBP since the 1970 season, but the MLB-average OBP in 2014 was actually three-thousandths of a point lower than this season and had roughly 250 more stolen bases.

Looking at the league leaders, though, it quickly becomes apparent that the dramatic downturn was more a product of fringe steal-heavy players losing their playing time.

Guys like Jarrod Dyson, Rajai Davis, Leonys Martin, Eric Young, and Jordan Schafer couldn’t secure everyday roles, which played a role in the general decline on the basepaths in 2015. And injuries mattered, too, as Denard Span (and maybe Carlos Gomez, if you believe the Mets) couldn’t cause havoc on the bases because he was on the disabled list.

But these explanations don’t seem to hold up on their own. Greater emphasis has been placed on catcher defense and framing in the past couple years, and teams are less reluctant to give 400 plate appearances to a below-average defender behind the dish. The Evan Gattises, Mike Napolis, and Ryan Doumits aren’t going to cut it any longer. Someone like Jason Castro will get the nod instead, despite the offensive shortcomings.

Going forward, it seems the message for fantasy owners is that high-volume stolen-base threats—such as Dee Gordon and Jose Altuve—are more valuable than they would otherwise seem in rotisserie leagues. Their advantage in the SB category is so much greater than most other top-tier players offer in their respective categories. That, in itself, carries significant value and should probably push them up owners’ draft boards. Instead of position scarcity, it seems we may need to start talking about category scarcity in fantasy baseball. Owners in traditional rotisserie leagues are going to be desperately cobbling together a well-rounded roster if they miss out on one of the elite speed players on draft day.