We’ve now meandered through three categories’ worth of retrospective analysis, and if you haven’t caught the first few chapters I’d strongly encourage you to check them out. One of the persistent themes that has come up thus far, including earlier this week in our look at batting average, has been the rebound in offense this past year. The familiar storyline of a relatively linear decline over the past decade-plus in league-wide run scoring had been well-documented, but 2015 saw a jump in offensive production that was, naturally, reflected in an ERA spike: 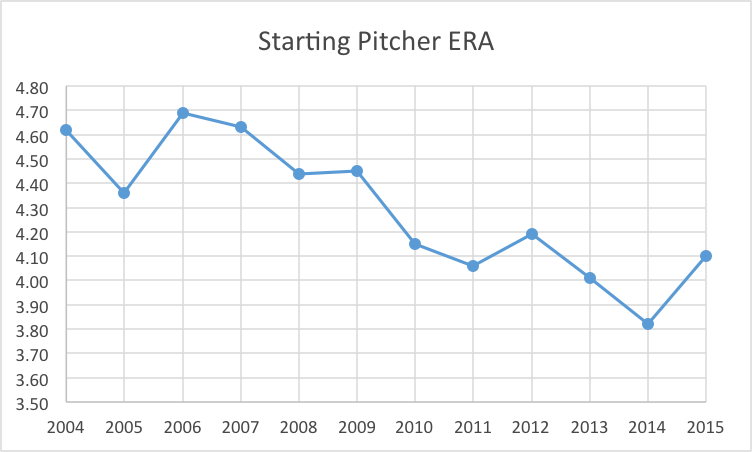 Starting pitchers got knocked out quicker last year as well, with senior circuit hurlers hitting the showers particularly early; the 5.77 innings-per-start average in the National League was the lowest mark since 2008, presumably the result of more pinch-hitting to fuel all that hot, juicy offense, along with starters giving it up that much more often. All told starting pitchers gave up more than 500 extra runs this season in almost 750 fewer innings than 2014, so the higher aggregate ERA hit fantasy managers that much harder in its concentration.

The top 20 qualified staters in the game were by no means immune from the development either, as their average ERA of 2.73 marked an 0.18-run incease over 2014. Dallas Keuchel’s 2.92 ERA in 2014, which baely snuck into the top-20, would’ve been good for 12th this year. It is worth noting, however, that despite the ERA inflation among the top tier, those starters actually posted a lower average FIP, continuing a recent decline (ERA in orange, FIP in blue): 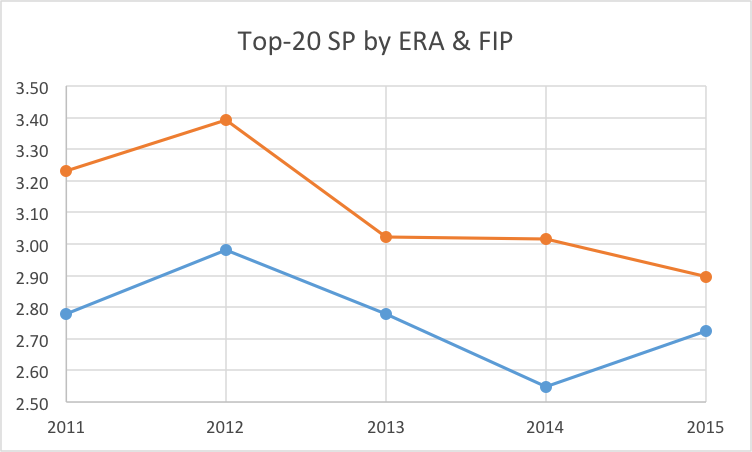 Only the Dodgers’ dual aces, Clayton Kershaw and Zack Greinke, have cracked the top-20 in ERA in each of the past three years, with the latter this year ending the former’s streak of four consecutive titles. And just three more pitchers – the aforementioned Keuchel, newly-minted Tommy John survivor Lance Lynn, and Tyson Ross have put up back-to-back top-20 seasons in the category. That means a full three-quarters of this year’s top-20 was nowhere to be found on 2014’s list, which illustrates the volatility of the category.

The single largest driver of the ERA spike this year came from home runs, which as J.P. noted jumped by over 700 this year (117 percent of 2014’s total) and drove a HR/9 jump from 0.86 in 2014 to 1.02. Overall starting pitcher WHIP remained constant, however, and the increase in run-scoring did not correspond to a substantially higher volume of base runners; offenses were simply more efficient at plating the runs they could, and that efficiency was overwhelmingly the product of more home runs.

Last year’s spike in overall ERA is probably more likely a blip than it is the beginning of a new trend. Shifts and better outfield positioning continued to wreak havoc on line drive and fly ball batting averages, and the recent batting average decline on those batted ball types continued unabated this year:

Toss in the “new normal” of high strikeout rates wrought by velocity gains and specialization in recent years, and you’re looking at a situation in which run scoring appears likely to be increasingly tied to homerun rate for the foreseeable future. And last year’s jump in that category may or may not be a sustainable development: while individual player homerun rates tend to stabilize quickly in a given year, they’ve tended to bounce around in bulk recently along an overall marginal decline: 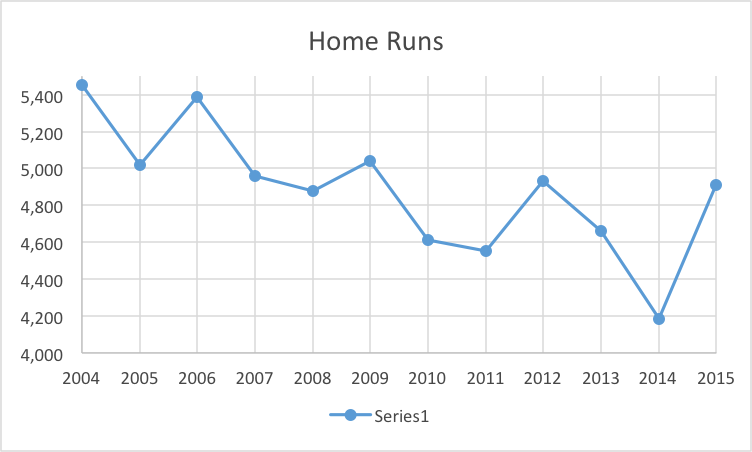 If home runs drop back even to their five-year average, it would mean more than 250 fewer long balls, and that in combination with a retention of recent strikeout gains would probably be enough to send ERAs wandering back down south again.