As relief pitcher aficionado Matt Collins pointed out on Tuesday, batting average rose (slightly) for the first time on a league-wide basis in a decade. On Wednesday, Keith Cromer took a closer look at batting average overachievers, which included the player believed to be the last to don frosted tips in a major-league uniform (Yunel Escobar, who somehow finished eighth in batting average this season) and underachievers like solid free agent investment Pablo Sandoval.

As was pointed out in our earlier categorical looks at home runs and strikeouts, inclusion on this portion of the rundown does not represent a recommendation for pickup in 2016, but if your deep-league squad is deploying a player like Luis Valbuena to help with power, then it certainly is advisable to balance out the damage done with somebody who can provide AVG help.

Chris Colabello, 1B/OF, Toronto Blue Jays
Colabello came out of nowhere (well, Triple-A Syracuse) to post a .321 AVG (tied for fourth highest with Paul Goldschmidt, min. 300 PA) in 360 plate appearances with Toronto—a more than 100-point jump from the .229 mark that he posted with the Twins in 2014 and a monumental jump from his .194 AVG with Minnesota in 2013. Hopefully AL-only and deep mixed-league owners who plucked Colabello off the scrapheap enjoyed the ride, because his .411 BABIP was the highest in all of baseball and the 32-year-old surely isn’t beating out any infield hits with his legs next season.

Nick Hundley, C, Colorado Rockies
Hundley’s lifetime on-base percentage including this season’s performance is .301. His batting average this season—his first calling Coors Field home—was .301 in 389 plate appearances. Hundley’s BABIP was .356 this season, but he used the same template in part-time duty with the Padres in 2011, hitting .288 with a .362 BABIP in 308 plate appearances. Hence, if the Rockies pair him with a competent backup in 2016, he may be able to replicate his 2015 success. That’s significant, because his .301 AVG was only topped by Buster Posey among catchers.

Jose Iglesias, SS, Detroit Tigers
After posting a lifetime .257 AVG in the minors, Iglesias hit .303 with the Red Sox and Tigers in 2013 (aided by a .356 BABIP) before suffering stress fractures in both of his legs that caused him to miss the entire 2014 season. Virtually everybody thought that the superb gloveman would struggle to hit anywhere close to .300 again in a full season, but Iglesias surprised in hitting an even .300 in 454 plate appearances, despite losing 26 points off his 2013 BABIP. Iglesias was one of only three shortstops to hit .300 or above, joining Xander Bogaerts and Francisco Lindor. If you miss out on one of the elite six-spot options next season, Iglesias could help balance out the category.

Francisco Cervelli, C, Pittsburgh Pirates
Cervelli certainly made the most out of his first full season as a starter, hitting .295/.370/.401 in a career-high 510 plate appearances. He should be the starter in Pittsburgh over the next few seasons and although his .359 BABIP was tied for tops among catchers with the younger and more-athletic Blake Swihart, it wasn’t that far out of line with this career BABIP of .341. Cervelli’s .295 AVG was fourth among all backstops in 2015 and his glove should ensure regular plate appearances next year, making him a great fallback option in NL-only or deep mixed leagues.

Odubel Herrera, OF, Philadelphia Phillies
When a guy hits for a .297 AVG in his rookie season, that’s impressive enough, but when a player makes the jump from Double-A as a Rule 5 pick and hits .297 in 537 plate appearances as Herrera did this season, it doesn’t seem too far-fetched to think that there might be some improvement as he matures. Herrera hit .294 in the minors, and while some may point to his .387 BABIP as a sign that things could come crashing back to earth for him in 2016, it may be that his true talent is that of a .290-.300 hitter. Herrera hit .268 in the season’s first half and .329 after the All-Star break, buoyed by a .432 BABIP over the second half. However, Herrera increased his line-drive percentage from 20.8 percent over the first half to 26.5 percent in the second half and also decreased his soft-contact percentage from 21.6 in his first 261 plate appearances of the year to 17.3 over his final 234—proof that he can make the adjustments necessary to hit for a high average at the major-league level. 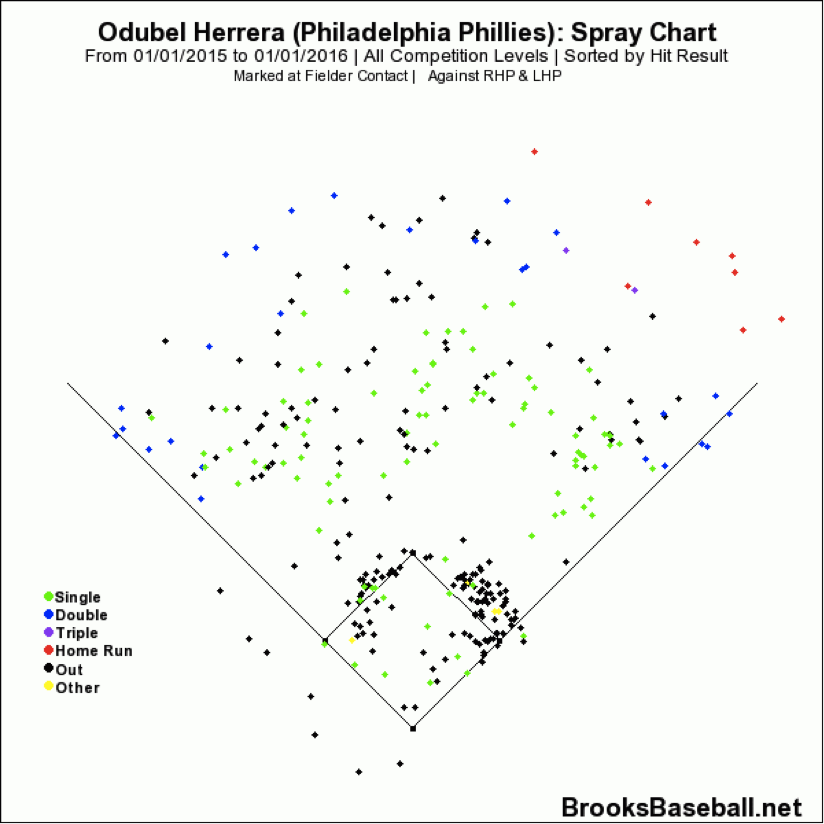 As you see in Herrera’s spray chart, he hits the ball everywhere. He is a strong bet to be near the top of the NL leaderboard in batting average for years to come, as he only enters his age-24 season in 2016.

Danny Valencia, 3B/OF, Oakland A’s
That Valencia hit .290 this season (fifth overall among third baseman) in 378 plate appearances is not entirely a surprise, as he hit .311 in 322 PA with the Twins in 2010 and .304 in 170 PA with the Orioles in 2013. What did come as a surprise was Valencia’s success (.285 AVG) against right-handed pitching (with 13 home runs in 229 PA) in 2015, as he owns a lifetime .237 AVG against righties over 1,146 career plate appearances. Valencia is an intriguing option for 2016 because he actually hit worse against lefties in 2015 (.298) than his career numbers (.321), giving him some breathing room if he regresses a bit against right-handers. The Blue Jays and A’s gave Valencia his most plate appearances against right-handed pitching since 2011—when Valencia hit .224 against northpaws—and it’s possible that the A’s saw enough from him in 2015 to save him from sharing time with the dreaded platoon partner. A season of regular at-bats would certainly be a boon to Valencia’s fantasy value, and if he does get 500-600 plate appearances, he could vault himself into a top-10 third-base option over the next few seasons.