We’ve now blown through two fantasy categories in our categorical breakdown series, with home runs and strikeouts being discussed last week and finishing up yesterday. We’ve seen both of those numbers trending upward in 2015, and today we’ll see if the same can be said for batting average.

If you’ve been paying even a little attention to baseball over the last few years—and if you haven’t, it’s super weird that you’re reading Baseball Prospectus—then you certainly have heard about the decline in offense around the league. As J.P. Breen noted last week, things started to revert back toward normal levels in the power department this year. Obviously we’re not back to the early-2000s levels of power around the league, but it’s back on the right track. Is that exclusive to power, though, or can the same be said for batting average?

Technically speaking, the league did see a rise in batting average in 2015 over previous seasons, the first time that could be 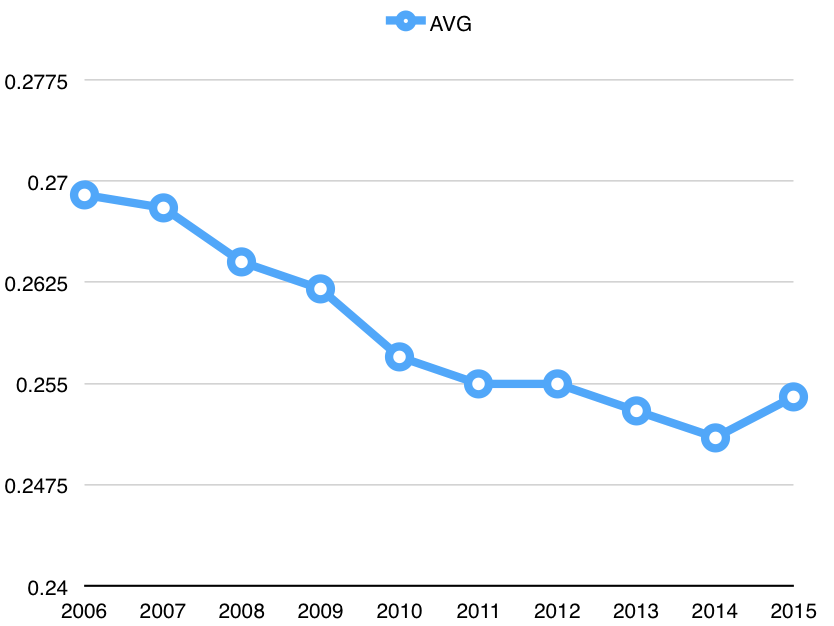 said since 2005. However, the spike wasn’t nearly as large

as the rise in power, and was small enough that it could possibly be viewed more as statistical noise than the start of a new trend.

The fact that the line is heading back up is a good thing for both fantasy owners and those who enjoy offense, but the fact that it’s back to the level it plateaued at in 2011 it less encouraging. It’s likely that we’ll look back on this era in 20 years and view 2014 as the absolute low point in offense, but it may be a slower and steadier rise than we saw in the home-run department.

What’s particularly interesting about the batting average landscape last year is that the top of the leaderboard didn’t look too differently from the top of the 2014 leaderboard. In fact, the elite hitters in 2014 were slightly better than they were this past season. For reference, here is a look at the top-25 qualified hitters by batting average from the past two years.

The top of that list was much more impressive last year, with the top two spots and three of the top four producing better results than they did in 2015. However, once you get outside of the top 10 you start to see the significantly better results from last year. There were 20 players who hit at least .300 in 2015, compared to just 16 the year before. More startlingly, there were 37 players who hit at least .290, compared to 23 in 2015. You’d need to go down to the 38th ranked hitter in 2015 to get down to the level of the 25th best hitter in 2014. In short, paying a lot for average didn’t pay off as well in 2015, but there was a lot more depth to reward those who waited to address this category later.

Looking deeper into the stat in question, it was relatively well distributed among positions. Really, the only spot on your roster you couldn’t rely on for batting average was catcher (unless you were a proud Buster Posey owner), but that could be said for basically every stat. While every other position was within at least three points of a .259 AVG, catcher was all the way down at .238.

Looking forward to the years to come, there may be no more intriguing position than third base. Sure, you have Mike Trout, Bryce Harper, and Andrew McCutchen in the outfield, but they’re old news. Third base only had two representatives in the top-25 last year (and one was Yunel Escobar), but there were plenty knocking on the door who should break through soon. In addition to Josh Donaldson, the hot corner can boast Nolan Arenado, Manny Machado, Matt Duffy, and Kris Bryant. While the position is typically known for power, look for them to possibly lead the pack in batting average for the next few years.

The overall future looks good for batting average, but there’s still reason to believe players will struggle here. Most importantly, strikeouts continue to rise around the league, as Greg Wellemeyer touched on last week. Obviously, that takes a huge toll on AVG. It also doesn’t help matters that defenses are becoming more and more sophisticated every year, although the effects haven’t shown themselves in BABIP just yet.

On the other hand, it’s hard to see offense dipping too far below where we saw it in 2014, and we’ve seen a big influx of talented young hitters over the last couple of years. All of these great bats have one more year of experience, and should lead the charge towards improvement in this area as the years go on. For the immediate future, however, I wouldn’t approach AVG too aggressively in auctions and drafts next season. There’s more depth here than high-end talent, so don't spend the big bucks on the better bets.