You’ve spent the last three days reading about home runs, everyone’s favorite fantasy category. J.P. had the landscape covered on Monday, with George and Bret covering standouts in shallow and deep leagues on Tuesday and Wednesday. It is my pleasure to kick off our coverage of the strikeout category today, and in keeping with our new categorical retrospective format, you’ll get some player-specific nuggets tomorrow. Monday that won’t just be a trip to memory lane, but will provide you with some useful information to carry into preparation for next year.

As J.P. noted in his overview of the home run situation, 2015 was a good year if you, like fledgling poultry, dig the long ball. The league’s home run total rebounded after a disastrous 2014 but don’t mistake that for a drastic shift in the soft offensive environment we’ve become accustomed to. In fact, 2015’s pitchers retired hitters via the strikeout at a higher rate than any point in history, setting a new strikeout rate record for the eighth consecutive year. The quantitative reasons are many: velocity is somehow still increasing, bullpens are being utilized at historically high levels, and batters are swinging at a record clip despite pitchers finding the zone less often than ever. Widespread access to mass amounts data about hitters’ tendencies can’t hurt, and anecdotally, front offices, coaching staffs, and the pitchers themselves are increasingly incorporating that data into their game plans, reluctantly or not.

Whatever the combination of reasons, a clear trend has emerged over the past decade. 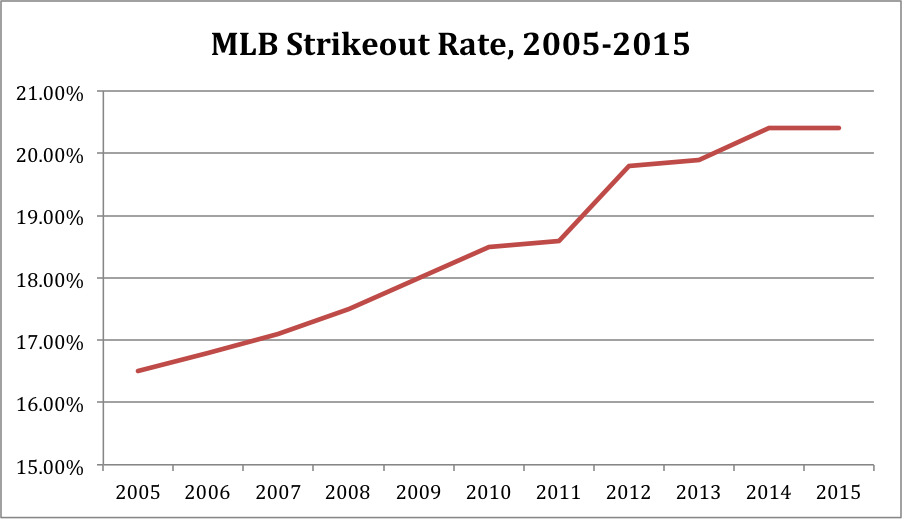 While the 2015 rate was mathematically an all-time high, we’re talking about a difference of hundredths of a percentage point in strikeout rate, or put another way, 7.76 strikeouts per nine innings in 2015 versus 7.73 in 2014. The increase is leveling off and while there may always be a team like the Rays pushing the envelope with roster construction and pitcher usage patterns, there’s an upper bound to how much major-league hitters will strike out. I’m inclined to believe we’re at or approaching it, and since velocity and bullpen specialization aren’t going anywhere, I think it’s safe to assume strikeout totals approximating what we’ve seen the past couple of years when calculating 2016 projections and valuations.

Studying the overall environmental is instructive, but more and more it includes middle-relief innings that aren’t a big part of the fantasy game, so it’s also important to examine the starter and reliever populations that we care about the most.

Here is a look at the top 10 raw strikeout totals from the past two seasons:

2015’s top 10, which included the first 300-strikeout season since 2002, recorded 65 more strikeouts than 2014’s, despite pitching about 20 fewer innings. The difference comes almost entirely from the fact that 2015’s top three strikeout artists would have led the league in 2014. It’s probably unwise to expect anyone to continue matching or setting career highs, but these guys are bankable as top-of-the-leaderboard assets. Scherzer is the old man of the group at 31, but Kershaw and Sale are, amazingly, still on the front side of their primes and will pitch 2016 at ages 28 and 27, respectively.

In addition to those three, Kluber, Bumgarner, and Price are top 10 repeats from 2014 to 2015, and if we expand to the top 20, we can add Cole Hamels, Tyson Ross, Jon Lester, Zack Greinke, and Felix Hernandez as occupants of both lists. If I had presented the data as strikeout rate instead of raw totals, Strasburg, Carrasco, and Francisco Liriano would have made both years’ top tens. Point is, don’t uniformly apply the relative unpredictability of pitcher performance to every aspect of the job. Strikeout ability is more stable than you might think.

While a pitcher’s placement relative to his starting-mates can be somewhat predictable at the top, here is some data on the redistribution of strikeouts in ten pitcher segments:

To be clear, when I say rank here, I don’t mean fantasy rank but rather rank order in raw strikeout number or K/9, depending on the column. The raw numbers can be a little deceiving without data about how many innings are in the sample, but if you believe the game’s best pitchers are likely to continue exploiting a mildly deteriorating approach and hold the gains they’ve made in the past few years, the data suggests that it’s worth dropping an extra buck or two on the truly elite options. There’s just not much separation in the middle. And again, you have at least a coin-flip chance of being right if you simply use the top of 2015’s leaderboard as a starting point.

Here’s a similar exercise with relief pitchers, comparing 2014’s top 20 strikeout totals from relief pitchers with the top 19 from 2015, plus a guy I made up and called Brad Brach:

One thing that jumps out is that only three relievers reached 100 strikeouts in 2015, compared to seven in 2014. It takes three legs to make a tri-pod or to make a table stand, it takes three wheels to make a ve-hicle called a tri-cycle, but it doesn’t take three digits to make a useable relief pitcher strikeout total. Nobody’s complaining because Cody Allen didn’t get the extra one to push him to triple digits. Okay, somebody probably is complaining. But it is interesting that 2014’s twenty highest strikeout totals from relievers easily outpaced 2015’s. Part of it is due to a 20-inning differential but that only explains about a quarter of the gap.

Perhaps another way to spot a fantasy-relevant trend is by examining the group of relievers who recorded saves and were therefore most likely owned in 2015. The 2015 pitchers with the top 42 save totals—an arbitrary line I drew to capture anyone with seven or more saves, plus a few with six who were definitely owned—tallied 2,954 strikeouts. The 42 pitchers with the highest save totals in 2014, which also includes every pitcher who had at least seven, totaled 2,700 strikeouts. Given that the strikeout totals backed up some for several of the highest ranked closers entering 2015—Kimbrel, Jansen, Holland, Robertson—the market inefficiency is (still?) the mid-tier segment. As always with relievers, it takes some luck to land on the right lottery tickets, but even if you cobble together your save total from less-heralded draft-day names and prudent free agent pickups, you can rely on a comfortable strikeout total.