Over the last two days, we’ve tackled both the overall landscape of the long ball and some of the big names that have either taken steps forward or backward. Today is the final article of this maiden category, and we are going to look at some hitters who don’t get fantasy owners all hot and bothered yet, but could potentially excite you in due time. Well, some. I don’t want you to think this is a glowing endorsement of everyone and then let you down later on. Anyway…

Khris Davis, OF, Milwaukee Brewers
Less contact is not necessarily a problem when you’re more selective about the type of contact you are making, and Davis did exactly that last year, posting his lowest career contact (68.5 percent) and swing (49.0 percent) rates. The jump in power was extreme over the last two months of Davis’ season, as he hit 20 of his 27 homers in his last 53 games. This, as they say in the business, ain’t gonna happen again. There’s nothing wrong with a solid 25-homer outfielder, but expecting this to be a sign of a jump into another realm is only going to lead to disappointment.

Mitch Moreland, 1B, Texas Rangers
Moreland is less of a jumper and more of a trampoliner. Trampoleiner? Bouncer? Let’s go with bouncer. After hitting 23 homers in 2013, he hit a whopping two in 2014 before honoring Michael Jordan again last season. Digging in, the 2013 profile was more conducive to predicting a repeat—which is ironic since he failed super hard at doing just that—as it featured a lower groundball rate and a much lower popup rate: two things that don’t help you hit the ball over the fence. There’s value here, but if I’m a betting man (and I am), I’d take the under on 19.5 homers for 2016.

Justin Bour, 1B, Miami Marlins
Well, that escalated quickly, and it may fall back down in a similar manner. Not only is Bour not anywhere near a guarantee to hold this job for 2016, but the raw power Bour has does not support a HR:FB rate of over 20 percent. He’ll need to start hitting substantially more flyballs to be a mixed-league factor in this category next year, or he’s destined (at best) to become the next Garrett Jones, in that you can probably rely on him for 15 homers as a strong-side platoon bat.

Randal Grichuk, OF, St Louis Cardinals
Forever the player who was drafted directly before Mike Trout, Grichuk finally began to make a real name for himself in 2015, clobbering 17 homers in just 350 plate appearances. If you knew nothing about the Cardinals outfielder other than Mike Matheny’s general usage patterns for him, you’d think he was a lefty-killer who was meh against same-side pitching. However, he had an OPS nearly 100 points higher against those same-sided gladiators in 2015, and if that’s the truth, he’ll be just fine. If you want a candidate from this group to piggyback his growth and go straight to the next level, Grichuk is that guy.

Jedd Gyorko, 2B/SS, San Diego Padres
The second baseman with the sparkling rookie campaign and frustrating sophomore one had a little bit of both happen in 2015. Yet there was far more good than bad, and it will likely cause him to be a touch of a bargain in 2016 drafts and in keeper/dynasty leagues. If you're into the whole second-half power-surge thing, Gyorko has you covered, as he hit .262 with 14 homers and 46 RBI in 82 games after being recalled from the minors on June 30th. If you're not and you want to take it back even further, he hit .263 with 16 homers and 54 RBI in 112 games (92 starts) after April ended. Either way, his April was a very bad month. If you're looking for a sleeper to jump into the 25-homer range (which would not have seemed out of line at all coming into 2014), the man with the newly minted shortstop eligibility is a very strong option.

Adam Eaton, OF, Chicago White Sox
The 2015 season was a good time to be a leadoff hitter in Chicago. Dexter Fowler rode a strong April and a strong second half to nearly complete a 20-20 season, and Eaton came far closer to accomplishing the same goal than would have been predicted. In fact, his 90th percentile PECOTA projection from the preseason pegged him at seven long balls, which would still have topped his career total up this point (he had hit six in over 900 plate appearances prior to the start of the season). So is Eaton a double-digit homer guy going forward? The way his batted-ball profile is progressing, I'm going to say yes. His groundball rate dropped to 50.7 percent in 2015, by far the lowest of his career thus far, and only three of his home runs were pegged as "just enough" by ESPN's Hit Tracker Online. Eaton's power spike was enough to make him a top-20 outfielder in mixed leagues, and while asking for a repeat of that is a bit rich, a season in the top 30 is there for the asking.

Christian Yelich, OF, Miami Marlins
Unlike Eaton above, Yelich was supposed to show the power that would push him to be a strong OF2 throughout his 20s. However, his extreme groundball tendencies are putting a governor on his fantasy potential. Amazingly thus far in his career, Yelich has averaged one fly ball every three games, which unsurprisingly will lead to depressed home run figures even if the ball does go far when he connects and keeps it in the air. The trick is that a bet on Yelich to reach that potential is not a bet on his current profile, it's a bet that he can change his current profile—or at least compress it a little. If the Marlins' outfielder could just move that groundball rate down to the low-50s (which would still make him a certified worm-killer), it could make a huge difference in his power output. However, as tempting as it is, betting on something that seems to come naturally to change is a leap of faith that Yelich's name value might make unwise.

Michael Conforto, OF, New York Mets
There are still some question as to whether the post-season is going to inflate Conforto’s 2016 value or not, since we’re still too close to it to know. He did hit three more homers in the playoffs, giving him 12 total, yet he had just six hits in 12 games. Some of the scouting reports on him, including our own from before the season, suggest that the power is the attraction and everything else is secondary, if there at all. However, watching him on a day-to-day basis down the stretch, I was impressed by his ability to barrel the ball to all fields. Of his nine home runs in the regular season, more than half were to the opposite field, and his overall spray chart tells a similar story, particular on line drives and flyballs: 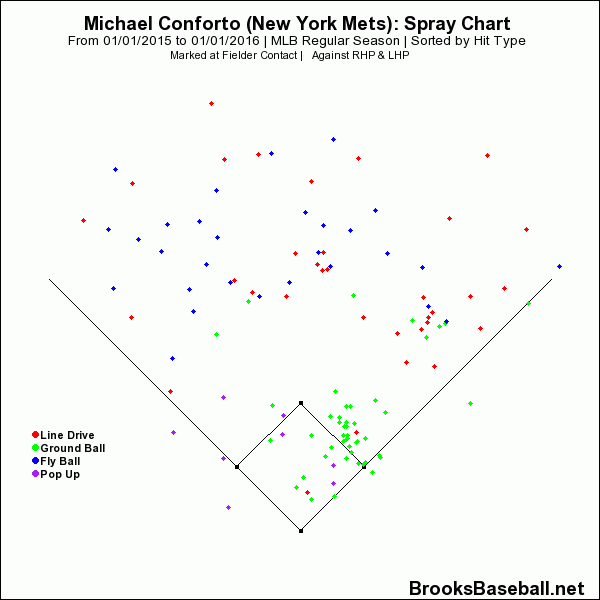 I’m still not super comfortable projecting him as much more than a .270 hitter, even with the strong showing in a relatively small 2015 sample, but that’s not what we’re here to talk about. With power to all fields having shown up from the get go, Conforto is a strong bet to get to 25 homers, as long as he doesn’t continue to sit against southpaws.

I’ll group these two together since they have a lot of the same strengths and weaknesses. Both Vargas and Arcia found themselves out the outside looking in due to a roster crunch and the strong performances of Eddie Rosario and Miguel Sano in the second half, yet they retain the raw power that makes them interesting in this space. The contact issues and plate discipline for each can be alarming at times, and they offer just about no defensive value (especially Vargas). However, with Torii Hunter having retired and Miguel Sano getting some exposure in the outfield, one of these two (assuming neither are traded) stood a half-decent shot at playing time before the announcement that the Twins won the bidding for Byung-ho Park. Fortunately for the two gentlemen in question, I’m not particularly optimistic about Park being the answer for the Twins at DH going forward—leaving a good buying opportunity this spring. If I am taking one, it’s Arcia, but grabbing both in an AL-only or very-deep mixed format could be advantageous.

Joey Gallo, 3B/OF, Texas Rangers
It’s tough to talk about power without mentioning Gallo, who has far more than anyone on this list. Unfortunately, he also doesn’t have a starting role on the Rangers as things shake out right now. Of course, even that won’t stop him from eclipsing 30 home runs if the opportunity ends up being there due to injury (I know, I know, it’s the Rangers, no one ever gets hurt on that team) or underperformance. The risks with Gallo are well published and not exaggerated. After all, he struck out in nearly 50 percent of his plate appearances in 2015. Yet, the tantalizing upside makes him a great bench player in leagues of all sizes (save the extremely shallow), as you can either make a ceiling or value argument for him as you slide down in league depth.

Chris Owings, 2B, Arizona Diamondbacks
It feels inevitable that Aaron Hill will be wearing a different uniform in 2016, which is the biggest impediment to Owings’ future playing time—though it didn’t feel like much of an impediment in 2015. The former top-100 prospect got 515 at-bats, despite a crowded infield, but he didn’t do much with the opportunity from a power perspective. However, his rising hard-contact and flyball rates were overshadowed by a miniscule 3.2 percent HR:FB rate. All four of the home runs he hit in 2015 were over 400 feet, and expecting 10-12 out of him next season is very realistic, as long as the playing time is there.

You need to be logged in to comment. Login or Subscribe
jfranco77
I like Owings, but 552 PA of .227/.264/.322 says that Chris Owings was more of an impediment to his future playing time than Aaron Hill.
Reply to jfranco77
davinhbrown
Seems like the D-backs want to retool, not rebuild. But also Drury should be up in 2016, and hard to say where guys like Tomas will end up.

Owing should get another year to let his potential have time to flourish, but may not have more time than that to turn into an impact regular.
Reply to davinhbrown
collins
Bret,
Can you say anything about why you are dubious of Byong-Ho Park?
Reply to collins