The first-ever edition in the Fantasy Categorical Breakdowns series was J.P. Breen’s excellent survey of the overall home run landscape. BP’s esteemed fantasy boss Bret Sayre will dive into the deeper names tomorrow, while today’s piece focuses primarily on which elite hitters made the biggest fantasy impressions this past season, either taking a step forward and breaking out in the power department or regressing from their lofty heights due to injury or ineffectiveness.

The 23-year-old hit more home runs (35 in 713 plate appearances) this season, than he did in the previous three years of his career combined (33 over 1,266 plate appearances). There isn’t much left to say at this point about Machado, who blossomed into a true five-category superstar, slashing .286/.359/.502 with 102 runs scored, 86 RBI, and 20 stolen bases. He’s one of just 11 hitters his age or younger in baseball history to post 30 home runs and 20 stolen bases in a single season, and the first player to accomplish the feat since Mike Trout in 2011. It’s not unreasonable to think that Machado, who earned $35 in AL-only formats in 2015, could potentially add even more home run power in the future, but if this is his power ceiling, fantasy owners will gladly take it.

The 24-year old burgeoning fantasy superstar tied Bryce Harper for the NL home run crown, crushing 42 this past season. In the process, the dynamic duo (along with Trout) became the first hitters under the age of 24 to eclipse 40 home runs in a single season since Prince Fielder in 2007.

It’s tempting to play up the Coors Field narrative, which was the case in 2014 when he hit 16 of his 18 homers at home. However, in 2015, Arenado actually hit more moonshots on the road (22) than in the launching pad in Denver (20). He’s in the perfect situation and there are zero reasons to question the talent (89 extra-base hits last year), but given how rare 40 home run seasons are historically in the current offensive environment, I’m not banking on it as a sure thing from Arenado heading into 2016.

There haven’t been many mistakes in Houston, but Martinez stands out as the biggest whiff of the otherwise stellar Jeff Luhnow era. The widely documented adjustments to his swing and approach at the plate legitimized his breakout (23 home runs in just 480 plate appearances) in the Motor City last season. It was fair to be skeptical that he could replicate those numbers once the league started to adjust, but Martinez took another step forward, crushing 38 home runs and earning $29 in AL-only formats in 2015.

The one knock on Martinez is the high volume of “just enough” or “lucky” home run classifications from the ESPN.com Home Run Tracker. They are most likely the result of the way Martinez hits the ball with authority to the opposite field. Of his 38 home runs this season, 14 (36.8 percent) went to right field, including five line-drive dingers. Even accounting for a slight regression in the power department, the 28-year-old is rapidly emerging as one of the most reliable and consistent fantasy sluggers in the game. (Spray chart from Baseball Savant.) 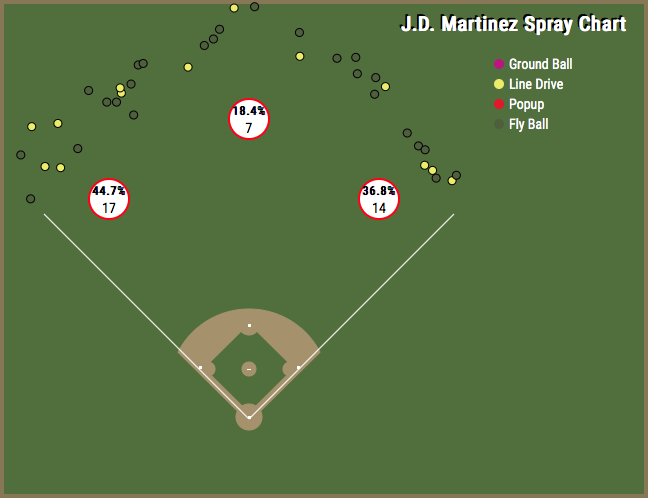 It’s always a bit terrifying when a hitter whose career-high single-season home run total through three years was 11 all of a sudden bashes 28 at the age of 29. There is nothing inherently fluky about this power surge either. 17 of his 28 home runs, an overwhelming majority pulled to right field, would have been out in pretty much every stadium in the league. Already one of the premier hitters in the NL (.303 TAv in 2,450 career plate appearances) Carpenter earned $25 on the senior circuit this past season, and remains one of the safest, high-floor fantasy options at the hot corner.

The Notre Dame product fell just one stolen base shy of becoming the fourth player in the last five seasons to hit 20 home runs and steal 40 bases. It’s a little weird seeing Matt Kemp on that list to be completely honest, but don’t let that scare you away from Pollock. It’s a fair statement to say that he overachieved in the power department in 2015: 13 of his 20 dingers were line drives and nine of his round trippers were classified by the ESPN Home Run Tracker as either “just enough” or “lucky.” Also check out the pitchers he took deep. Nobody has been a bigger fan of Pollock in recent years than I have, but I’m fully expecting some regression in the home run department going forward.

Despite missing the entire 2014 campaign due to suspension, the 40-year-old racked up his most plate appearances (620) since 2007 and cranked 33 long balls in the process, his most since 2008. If that isn’t the definition of exceeding all measured and reasonable expectations, I’m not sure what is anymore. We may be dealing with a once-in-a-generation talent, so I won’t rule the odds out completely, but Rodriguez is venturing into virtually uncharted waters going forward.

According the Baseball-Reference Play Index, only one hitter in baseball history, Darrell Evans (34 homers with Detroit at age 40 in 1987), has done what Rodriguez will accomplish if he repeats this type of power next year. Seriously, not even Barry Bonds reached 30 homers in a single season beyond age 40. That was a bit of a downer, I know, so let me make it up to you with a video of Rodriguez hitting a bomb off an El Duque eephus pitch.

Unfortunately, his offensive production cratered across the board, not just in the home run department, this past season. He batted an absurdly low .199 with just 50 runs scored and 64 RBI in 460 plate appearances. When you’re a one-category fantasy producer, you had better be elite in that one category, and while expecting a carbon-copy repeat of a 37-homer campaign is asking a lot, 24 home runs isn’t enough to justify keeping an anchor like Carter on board.

There are some encouraging signs in his profile, which suggest that it may be worthwhile to invest at a huge discount. Most notable among those are an elite (51.8 percent) fly-ball rate and a HR:FB clip that ranked 24th out of the 211 hitters who racked up 400 plate appearances in 2015. It’s hard to get excited long term because of the presence of A.J. Reed, but if he’s an afterthought on draft day next year, it’s not a bad gamble to take.

This is not an indictment of Stanton. Let me be clear. Not only did he crush four of the 10 longest home runs of this past year, but according to Baseball Savant, he also led the majors with an average batted-ball velocity of 97.73 mph.

With that important disclaimer out of the way, it’s critical to not understate the health risks. I have no doubt that eventually Stanton is going to have the one magical campaign where he stays healthy and hits upwards of 50 home runs, but given what it costs to acquire his services on draft day and the fact that he has reached 600 plate appearances in a single season just twice in the last five years is a cause for concern when the bidding reaches the mid-30s in an NL-only format. In expert formats this past spring, he went for an average of $37, but returned just $18 due to injury. I have no problem paying the freight for 30 home runs, but can you really afford to risk anything above that considering he hasn't hit more than 37 in a single season… yet?

I’m not sure what is more shocking, that Cabrera finished with just 18 home runs, or that 28-year-old journeyman Justin Smoak had just as many with Toronto this season. It’s hard to complain about a guy who just won the AL batting title (.338 over 511 plate appearances), but his two lowest home run outputs since 2003 (his rookie year) have come in the past two years. It’s easy to blame the leg/foot injuries for sapping his elite power and bank on a rebound, but are we really expecting him to get healthier as he enters his mid-30s?

There may not have been a more prolific combination of power and speed in all of fantasy baseball than Gomez from 2013-2014. He crushed at least 23 homers and swiped 34 bases in back-to-back seasons, before falling off a cliff due to injuries in 2015. Gomez dealt with separate injuries to his hamstring, back, knee, wrist, hip, groin, and head over the course of the past year. Yikes. Assuming he can get healthy, there is plenty of reason for optimism for a bounce-back, especially in the home run department in Houston next year.

Coming off a career-year in which he ripped 32 homers while batting .335, Martinez cashed in with a four-year, $68 million deal to re-sign in Detroit. Unfortunately, he tore the meniscus in his left knee, the same knee in which he tore his ACL back in 2012, and even when he came back, the injury destroyed his ability to drive the ball. His power seemingly never returned. At 37 years old, it’s hard to imagine a scenario in which the power ever returns, particularly after so many injuries to that left knee. Someone will take a flier based on name recognition alone, but as a utility-only option, there are better lottery tickets to gamble on in 2016.

You need to be logged in to comment. Login or Subscribe
Michael
On the Manny Machado comment, he's one of just 11 hitters his age or younger to have 30+ HR / 20+ SB in a season, as the link indicates.
Reply to Michael
GeorgeBissell
That's correct.
Reply to GeorgeBissell
statsrath
Fixed.
Reply to statsrath
ErikBFlom
He is one of 9 hitters. Andruw Jones and Alex Rodriguez had two seasons each for 11 seasons, but only 9 hitters.
Reply to ErikBFlom
GeorgeBissell
Source confirms that I was in fact so flabbergasted by Machado's performance that I completely butchered that sentence. My counting skills were clearly below replacement level on that one.
Reply to GeorgeBissell