With the baseball offseason upon us, the Fantasy Team at Baseball Prospectus will bring y’all a category-by-category fantasy breakdown of the 2015 campaign. Each category will feature three different articles: one on the overarching landscape of the category, one on the elite performers, and one on the deeper names. These articles seek to analyze and interpret what happened in 2015; however, they should also serve as tools to help owners prepare for their next fantasy seasons.

Since everyone—save for noted small-ball enthusiast Ned Yost—digs homers, it makes sense to start this series with power production at the dish. Besides, we did some market research, and a Fine American Gentleman expressed his approval of this decision.

A recent power outage across Major League Baseball had many fantasy owners clamoring for home runs on draft day. It made sense, too, as the 2014 season brought us one of the worst HR seasons in recent memory, making national pundits wonder if, in an interest of fairness, it was finally time to lower the mound.

As the data illustrates, though, the long ball made a triumphant return in 2015: 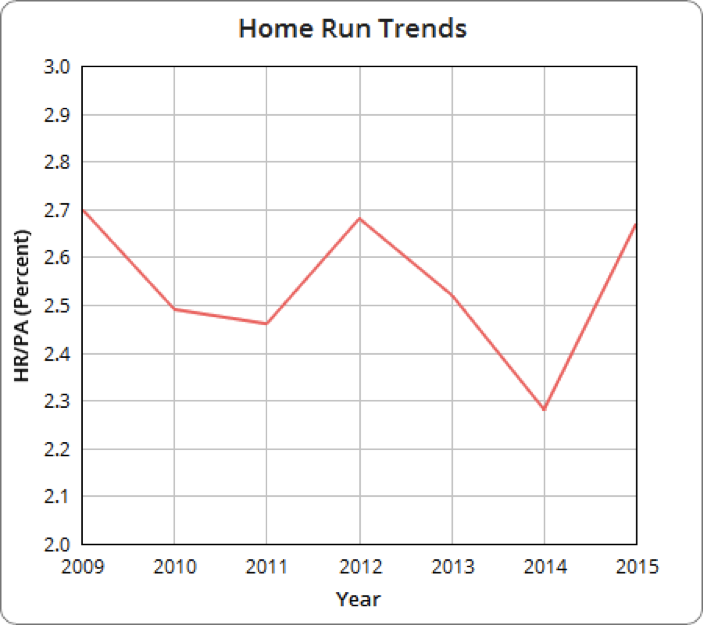 Major-league hitters weren’t knocking it over the fences at a record rate, far from it, but the power numbers rebounded dramatically from the previous year. It appears the offensive decline that had many writers in a tizzy was merely normal fluctuation and not a harbinger of things to come.

Such an increase can also be seen in the individual home run numbers. In 2014, only 11 players hit 30-plus homers. A total of 20 hitters did so this season. Nelson Cruz was the lone batsman to eclipse the 40-home-run plateau in 2014, while nine separate players launched at least 40 homers in 2015. Thus, the overall increase wasn’t just the lower-tier players hitting for more power. Those at the top enjoyed a similar jump in home-run totals.

Here are those individuals who clobbered at least 30 homers, a nice round number, this season with special mention of those who hit 40-plus.

As evidenced from the above table, first basemen necessitated 30-plus power to be relevant at the upper fantasy echelons of the position. Furthermore, fantasy owners looking to roster a full-time designated hitter in their utility spot, he needed to be a 30-plus guy to be worth it. It should also be noted that no catcher or middle infielder made the list, while only seven outfielders did so.

On the other end of the spectrum, fewer players who received regular playing time were completely worthless in the power category. Only 29 qualified position players failed to hit double-digit home runs. A year ago, that number was 43.

For a hitter to be fantasy relevant, then, he needed to provide value in another category. It should not be surprising that 19 of the 29 players who failed to hit 10-plus homers had at least 10 stolen bases. That is a higher percentage than the 24 of 43 single-digit-homer guys who accomplished that feat in 2014. This makes sense, too. As power across the league increases, players without power have to compensate in other areas to maintain regular playing time—this is the same in fantasy baseball. The problem is that real-life baseball players can compensate with plus defense, which is useless in traditional fantasy leagues.

The overall message to take from this is that the much-maligned power outage across the league didn’t exist in 2015. The long ball returned in a significant way. The raw number of home runs needed to be above average in fantasy leagues increased, as did the number of home runs needed to be considered elite. Do not make the mistake of using 2014 benchmarks to make decisions for 2016.

At the same time, the graph at the beginning of the article illustrates that power fluctuates from year to year. It’s not consistently declining, as was the narrative a year ago. It does appear, though, that last year represents the high end of recent power production. It’s best to assume that 2016 home-run totals will be somewhere between 2014 and 2015, probably skewing a bit toward the latter.

In the end, although Ken Rosenthal was talking about defensive shifts, his advice proved insightful. Before making too many demands for change in an effort to help hitters, it’s best to see if professional hitters can adjust to an evolving pitching/fielding environment. They proved in 2015 that they could deal with sky-high pitching velocities and still hit the long ball, after all.

You need to be logged in to comment. Login or Subscribe
kcshankd
Hilarious, a gratuitous jab at the manager with the highest winning percentage in post-season history.

You have any evidence for that claim?
Reply to kcshankd
jimmyb1799
Yeah, I grew up a Brewers fan.
Reply to jimmyb1799
bobbygrace
The way that .jpg is cut, the Fine American Gentleman appears to have the world's most luxuriant chest hair.
Reply to bobbygrace
MikePemulis
No MIs, Cs and only one CF. It's almost like all is right again. How many from that crew could hit 30 next year though? Correa, Tulo, Cano, Story (if he's there), Schwarber (if you consider him a catcher), Corey Seager? Anyone else that has a shot?
Reply to MikePemulis
ares1800jr
Dozier hit 28 last year.
Reply to ares1800jr