Back when I was a newbie around these parts, I profiled Lucas Duda, who, during the season’s first six weeks, looked like a new hitter. Duda seemed to be evolving; all of a sudden he was going the other way, hitting liners instead of flyballs, and enjoying relative success against same-side pitching. What he wasn’t doing was hitting for power, the primary reason he was selected as the 15th first baseman off the board and a top-150 selection overall, according to NFBC’s ADP data.

When that article was published on May 20th, Duda was slashing .289/.386/.451 with only three home runs in 40 games. In part because it was too early in the season to know if there was a real change in his game, but mostly because I’m a coward, I offered up a mild buy recommendation, assuming that the power would come eventually. Immediately thereafter, Duda got it going, bopping six home runs in his next seven tilts. He didn’t hit another until 17 games later, and it was this kind of streakiness that defined his season. Duda would go on another tear in late July, hitting nine long balls in eight contests, before adding a five-homer outburst in a three game stretch during the season’s penultimate week. All of that adds up to 20 home runs in 18 games, leaving seven home runs spread over the other 117.

That kind of performance from a player on the periphery of automatic-start status is a difficult pattern from which to extract value. Any owner would be forgiven for benching Duda at some point during the 46-game stretch between his first two hot streaks, wherein he hit .168/.282/.275 with 14 runs and 14 RBI. If you watched him play during that stint, it looked as bad as the numbers suggested it was. Similarly, Duda hit .205/.386/.386 with 7 R+RBI in the 15 games between his return from the disabled list and his final home-run binge of the year. A benching during that time period didn’t suffer from recency bias or impatience; it was the prudent thing to do. Nevertheless, if you owned Duda and you didn’t anticipate his next hot streak, you probably missed out on some or all of his short bursts of production.

In the end, Duda finished with a 67/27/73/0/.244 5×5 roto-slash line, which made him the 29th-best 1B according to ESPN’s player rater, and 18th among players who are eligible only at first base. That’s a disappointing year for a player who was expected to replicate, if not build on, a 2014 season that saw him finish 15th at his position. The primary reason for the drop in fantasy value was a decline in his RBI total from 92 to 73. Some of that was a result of 42 fewer plate appearances, but more could be attributed to his performance with men on base. In 2014, only 12 of Duda’s 30 home runs (40%) were solo shots, and further, he hit .287 with men on base and .303 with runners in scoring position. In 2015, 19 of his 27 (70.37%) were one-run jobs and he was dreadful when teammates reached ahead of him, hitting .210 with men on base and .212 with men in scoring position. Pointing at BABIP is often overly simplistic, but his situational BABIP in 2014 was essentially the same with runners on or not, while there was a 47-point difference in 2015. This is not the kind of trend I would expect to carry over from one year to the next. With two more years of team control to go, it’s reasonable to expect Duda to hit in the fat part of the Mets lineup next season, and his RBI total should rebound.

Looking back at the peripheral changes I noted in mid-May, the first thing that stuck out at that time was a shift in Duda’s batted ball mix, which was a huge departure from his career norms. Where he had consistently ranked among the most persistent flyball hitters and infrequent worm-burners, Duda was leading the league in line drives. Here’s what he looked like at the end of the season, with past years included for reference:

While Duda’s fly-ball and ground-ball rates relative to the rest of baseball remained unchanged, he did continue to make some nominal progress in trading some flies and grounders for line drives. Despite the more favorable mix, Duda experienced a negligible increase in his BABIP and his batting average actually backed up nine points. Other batted-ball data sources also show Duda swapping grounders for liners over the past few years, but the degree of the change is much less pronounced than the above data, taken from our leaderboard. It is well known that batted ball classifications have errors, can differ between sources, and take a long time to stabilize, so take the raw numbers with some level of skepticism.

I also pointed out in May that Duda was hitting the ball to the opposite field more often than he had before, and he continued to do that throughout the season. According to data from Baseball Info Solutions, Duda went the other way 27.1 percent of the time in 2015, a six-percentage-point year-over-year increase. Duda is pitched heavily on the outside part of the plate, and you can see the migration in his spray chart as a result of his willingness to hit the ball where it was pitched and his attempt to avoid the shifts often employed against him. 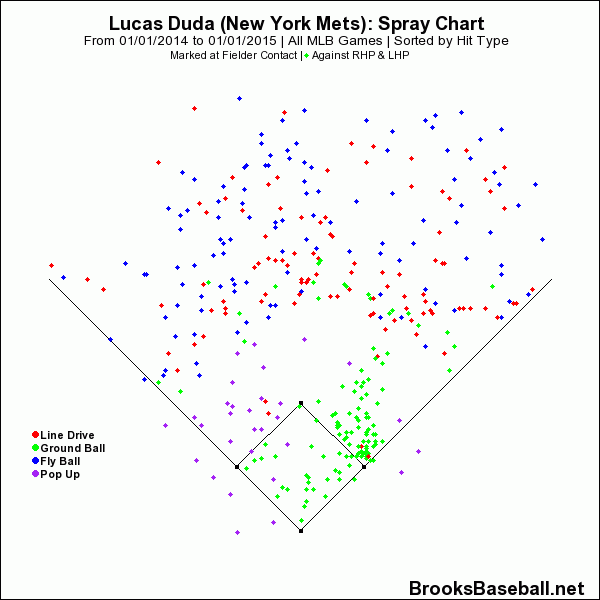 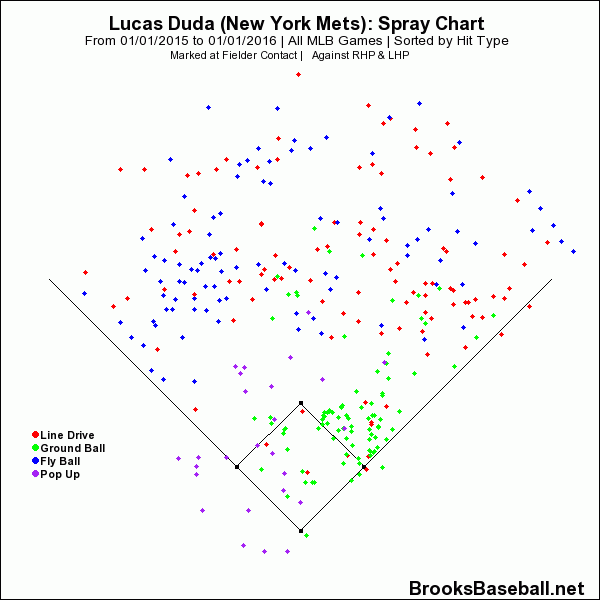 In addition to the changes in batted ball mix, Duda was more aggressive and made more contact early in 2015 than he had in years past. Duda did show some uptick in both his swing and contact rates, but in the end of the season, they more or less stabilized around his career norms.

Lastly, I noted the success Duda was having against southpaws in the early going this season and the surface stats do show marked improvement over his career line, and especially over his 2014 performance.

We’re talking about 132 plate appearances in 2015, so while encouraging, I’ll caution that this is still likely a statistically insignificant sample and it’s hard to believe Duda transformed himself from a wRC+ of 54 against lefties in 2014 to a player with a severe reverse platoon split. There’s no question Duda’s numbers against lefties were boosted by a lucky .378 BABIP. Further, a 5.3 percent walk rate represents regression from the past two years and a 31.8 percent strikeout rate is right on top of his career number, perhaps indicating he wasn’t actually seeing the ball out of same-side hands any better than he had previously. I’m very skeptical this is real.

In the end, Duda is pretty close to the player we thought he was at the beginning of the year, which is to say that I still regard him as an acceptable starting option in standard-depth mixed leagues. It’s unlikely that his production will cluster in the same way it did in 2015, which should make him more of a plug-and-play option. Duda is unlikely to ever hit .250 but will be a reliable power source for another couple of years and should provide ample counting stats, depending on how the Mets reshape a dominant second-half offense in light of a couple of key pending free agencies.

BP has an even stronger park adjustment for Citi Field giving Duda an overall park factor of 89. I am 99% sure TAv is park adjusted.

According to BP's sortable stats, Duda had the 11th best TAv among ALL players with 500 PA.
Reply to jfranco77
jthom17
He had a 133 RC+ which ranks him 23rd among players with 500 PA. ESPN player Rating of 3.41 which ranked him 206 among all players. RotoGraphs "End of Season" value of $4.82 which ranked him 17th at 1B. So he was between the 11th best player or the 206th?
Are the metrics we use this bad or something unique with Duda?
Reply to jthom17
jfranco77
Park factors make all his stats look better (RC+, TAv, OPS+) but don't help fantasy players.

Also, his runs scored and RBIs (and even AVG) pretty much suck for a guy who was a top 10-25 hitter by adjusted numbers.
Reply to jfranco77