Fantasy owners', particularly keeper and dynasty owners', aversion to investing heavily in closers has been well documented and is certainly warranted. The risks often outweigh the rewards when you consider the relative instability of the position overall. Due to a toxic combination of injuries and ineffectiveness, there is more turnover on a yearly basis among closers than among player at any other position. As a result, elite fantasy stoppers have a tendency to emerge out of nowhere, as was the case with both Wade Davis and Jeurys Familia this year.

A pair of premier setup men a year ago, their performance once they ascended into their respective teams' closing roles made them two of the best values in fantasy baseball this season. According to the end-of-season valuations compiled by my Baseball Prospectus colleague Mike Gianella (who won both Tout Wars NL and LABR Mixed with Bret Sayre this year), only Andrew Miller ($23) earned more than Davis ($22) in the AL, while Familia ($23) finished behind Mark Melancon ($25) in the NL this season.

It’s only fitting that when the New York Mets and Kansas City Royals square off in the World Series, either Davis or Familia, a pair of failed starting pitchers destined to become the model for every failed rotation candidate making the conversion to the bullpen, will be the ones to close it out. If baseball is a game of adjustments and adaptations, there are no better personifications of that notion than Davis or Familia.

The Long Road To The Ninth Inning

"Entering the 2014 season, the Royals and Mets were finished experimenting with Davis and Familia in their starting rotations… Not only did they take up permanent residence in their teams' bullpens, but they manufactured terrifying new identities…"

According to Baseball Prospectus' revolutionary new metric Deserved Run Average (DRA), Wade Davis posted the lowest mark (1.67) of any pitcher who threw at least 50 innings this year and has been arguably the AL’s most dominant reliever outside of Dellin Betances for the past two seasons. 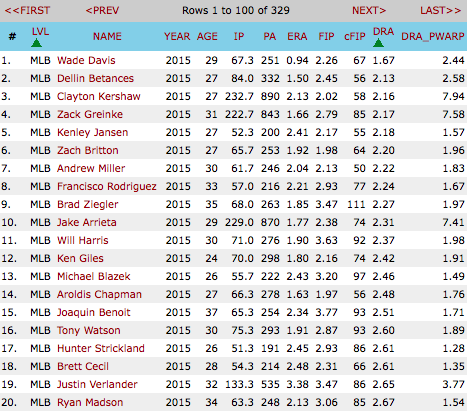 Acquired by Kansas City as the second banana coming over from Tampa Bay in the James Shields trade (back in 2012), Davis was viewed by many industry analysts as the piece that would make or break the deal for Royals long term if he could remain in the starting rotation. At the time of the swap, nobody could’ve anticipated that instead of sticking in the rotation, he would ultimately transform into arguably the most dominant reliever in baseball.

After posting a 5.32 ERA (5.65 DRA) over 31 appearances (24 starts) in 2013, he was exiled to the Royals bullpen permanently entering last season. The ensuing result was a dramatic shift in his repertoire and a dramatic increase in velocity on nearly every single one of his offerings. As you can see from the PITCHf/x data in the chart (courtesy of Brooks Baseball) below, Davis essentially scrapped his entire secondary arsenal from his days as a starter, electing to utilize only his four-seam fastball, cutter, and curveball in relief: 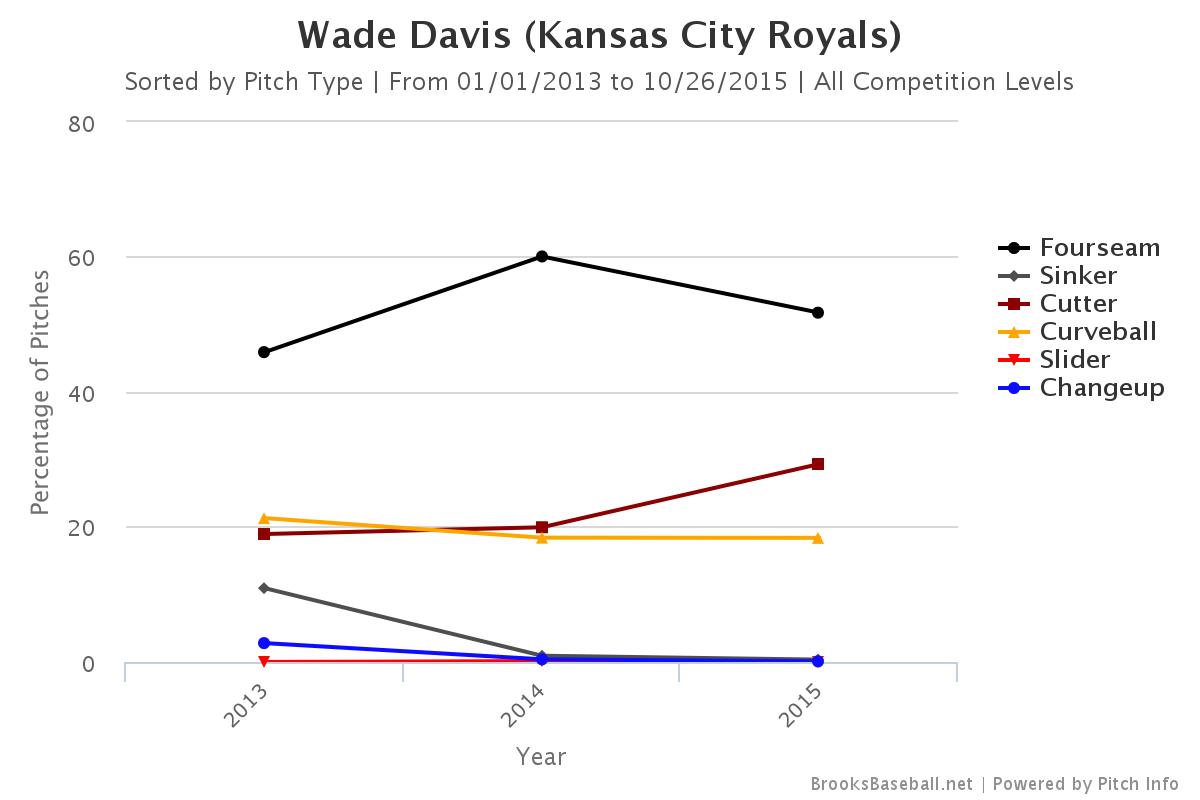 The radical development didn’t end with pitch selection, however, as Davis also cranked up his average velocity across the board with the move to the bullpen. He added nearly 3.5 mph to each of his offerings. As a result, Davis’ average four-seam fastball velocity increased from just below 93 mph as a starter to nearly 97 mph (touching triple-digits at times). His cutter jumped from a tick below 90 mph to 93 mph, and he gave opposing hitters even less time to react to his devastating curveball by jacking up his average velocity on the bender from 82 mph to 85 mph. 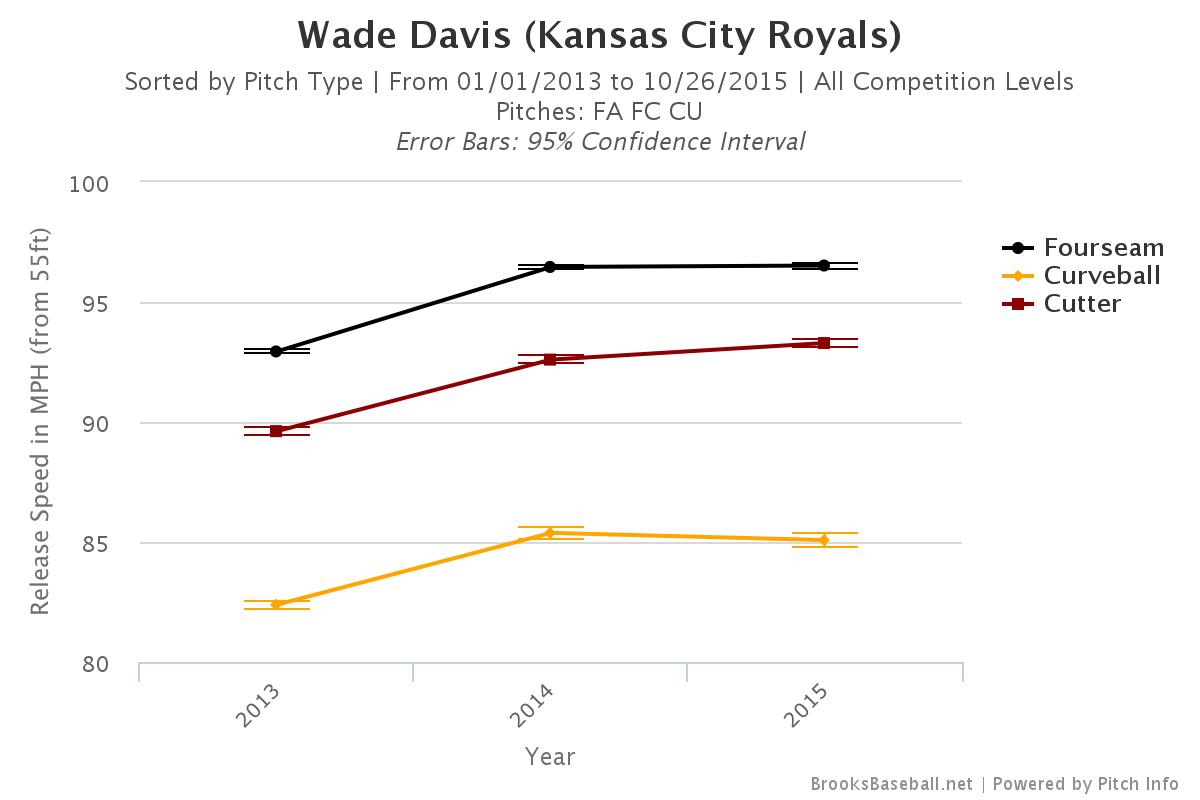 Despite a stellar 2014 campaign in which he registered a 1.00 ERA (1.80 DRA) and 0.85 WHIP with 109 strikeouts over 72 innings of work, his fantasy value remained minimal coming into the year due to the presence of All-Star closer Greg Holland, who converted 93 saves over the 2013 and 2014 seasons. Even though he dealt with injuries and inconsistent performance all season, Holland never fully relinquished the closing gig until he was shut down in September with a “significant UCL tear” and underwent Tommy John surgery earlier this month.

Even in the dark, an established veteran closer like Holland casts a palpable shadow over the Royals bullpen. However, it would appear that his injury combined with Davis' dominant performance would eliminate any possibility of him closing in Kansas City again. Holland will be arbitration-eligible for the final time in 2016, which means that there is a real possibility he could be non-tendered and become a free agent this offseason. If for some reason the Royals elect to bring Holland back, it’s still unlikely that Davis relinquishes his firm grip on the role.

The meteoric rise of Jeurys Familia began when his fellow countryman from the Dominican Republic, Jenrry Mejia, was suspended for 80 games in April after testing positive for a performance-enhancing drug, and later failed another drug test in July, sidelining him for the remainder of the 2015 season.

The 26-year-old would proceed to tie a Mets franchise record, converting 43 saves while compiling a 1.85 ERA, 1.00 WHIP, and 86 strikeouts (9.9 K/9) over 78 innings this season. While his ERA ranked ninth out of 329 pitchers who threw at least 50 innings this year, Familia’s DRA (2.99) was considerably higher (45th out of 329), which suggests that it’s not completely unreasonable to expect some regression in that department in the future. However, there is a legitimate argument to be made that he’s the top fantasy closer in the NL heading into next season, right up there with giants like Aroldis Chapman, Craig Kimbrel, and Kenley Jansen.

The road to the ninth inning for Familia, much like that of his World Series counterpart, began in 2014 when dreams of a potential frontline starter were officially scrapped and he was put into the Mets bullpen coming off elbow surgery the year before. While Mejia ascended to the closer role, Familia put together a solid campaign (2.21 ERA over 76 relief appearances) in the primary setup gig. Meanwhile, he gained a full mile-per-hour on his two-seam fastball (sinker), increasing his average velocity to 97 mph. As you can see from the PITCHf/x data at Brooks Baseball, he also made the sinker his primary offering. 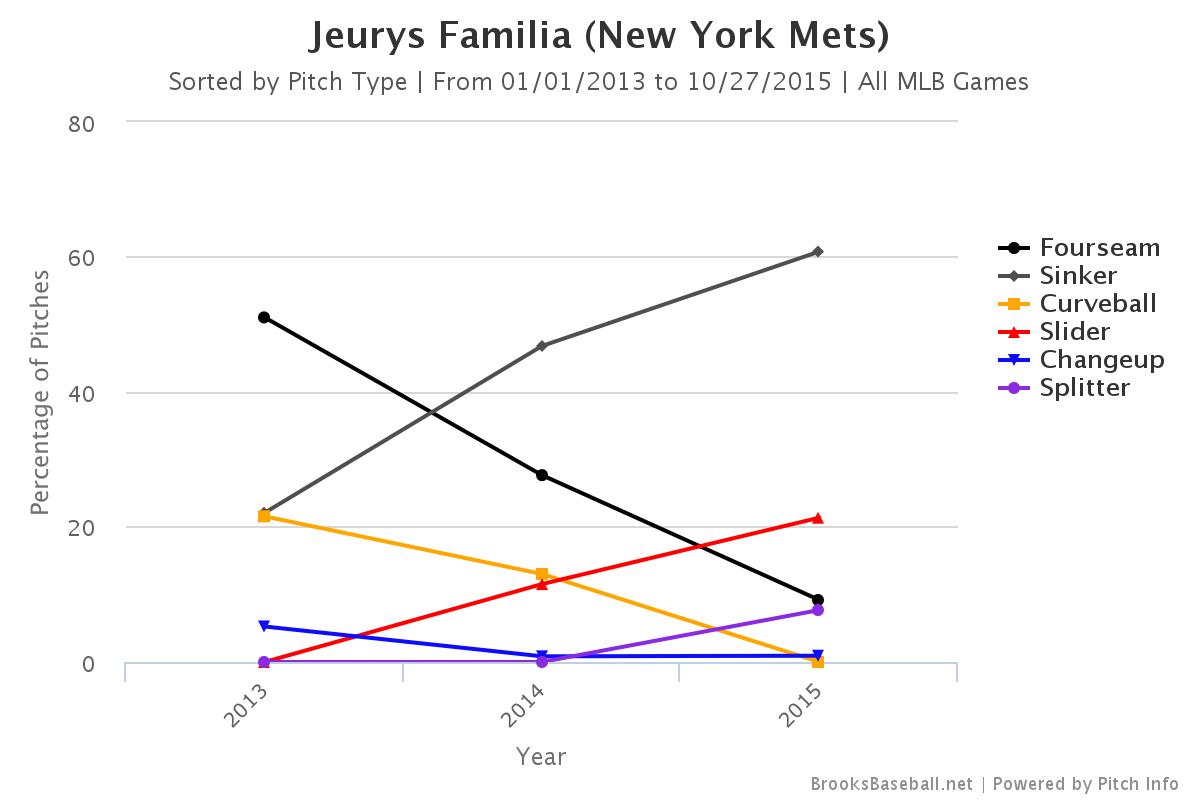 The improvements to Familia’s arsenal didn’t end there. In addition to nearly doubling the number of filthy sliders he threw, he added a mind-blowing splitter this year. You may have noticed it (the purple dot) on the previous chart. According to the PITCHf/x data at Brooks Baseball, Familia began throwing the splitter on August 10th against Colorado and hasn’t looked back since. It’s no understatement to suggest that the splitter, if he masters it, could be the catalyst that drives a truly historic performance in the near future. 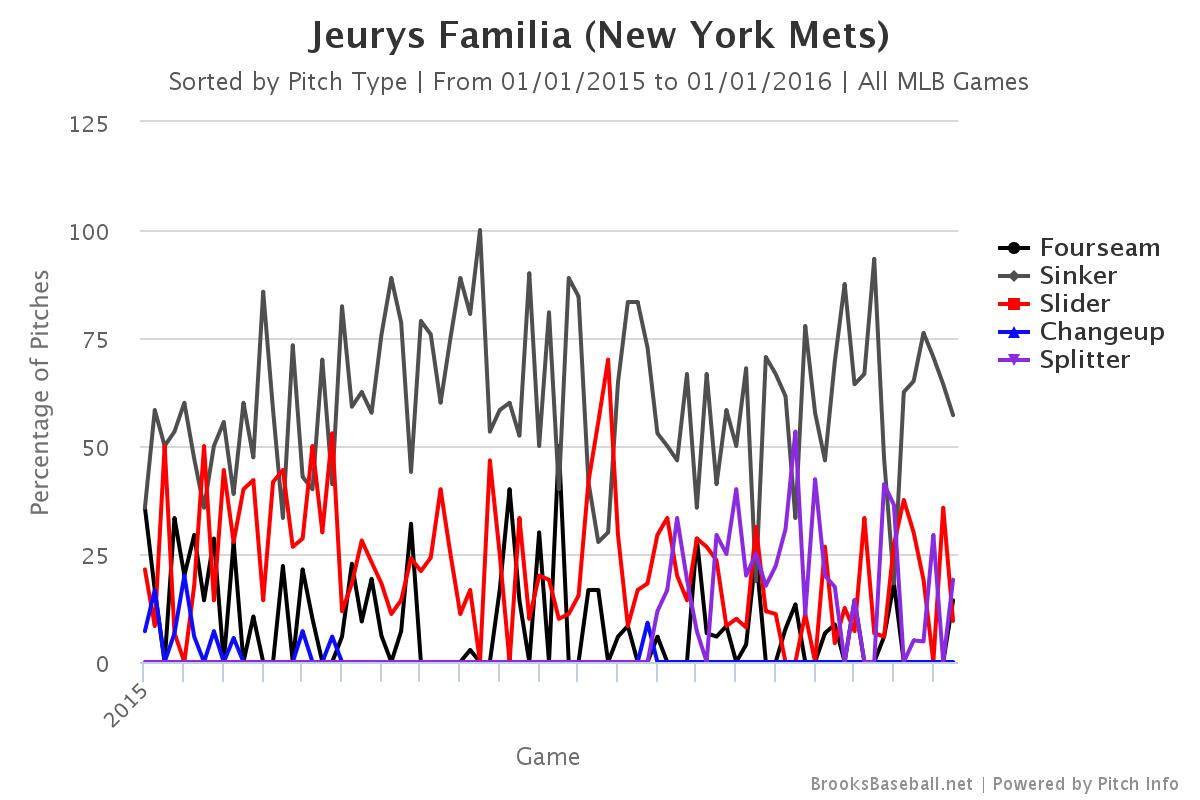 My Baseball Prospectus colleague Chris Mosch wrote a brilliant piece regarding Familia’s brand-new splitter in late August. Not only was Mosch one of the first to highlight/profile the new offering, but he hit on a key point as well: The velocity with which Familia throws the split is unprecedented. In the PITCHf/x era, dating back to the 2007 season, no pitcher has averaged 90 mph on his splitter, except for Familia—who averaged 93.75 mph. If you think the pitch is unfair now, just wait 'til you see the whiff rates it generates:

"Both Davis and Familia possess premium velocity and movement on their fastballs, which they use to get ahead of opposing batters. Once they do, the battle is usually over… Whether it’s the curveball (Davis) or the slider and splitter (Familia) that is slamming the door, hitters have almost no shot when the dynamic stoppers go to their breaking and offspeed stuff…"

Earlier this season, my Baseball Prospectus colleague Dan Rozenson published a stellar article in which he calculated updated benchmarks for each pitch, using the PITCHf/x data from the 2014 season. Here is where both Davis and Familia stack up this season against the league-average rates for velocity and whiffs-per-swing from a year ago.

According to the Baseball Prospectus PITCHf/x leaderboards, Davis not only boasted the second-highest average velocity on his cutter (trailing only Houston’s Josh Fields who came in at 93.28 mph), but he also ranked sixth out of 47 relievers who threw at least 100 cutters this season in terms of horizontal movement (2.28) on the pitch. With the notable exceptions of renowned cutter specialists Kenley Jansen and Bryan Shaw, no other reliever in the game today boasts an offering that combines movement and velocity the way Davis does.

The PITCHf/x numbers become even more frightening (for opposing hitters) when you take a glance at the astronomical whiffs-per-swing rates Davis generated this season. Both his four-seam fastball (52th out of 295) and cutter (eighth out of 47) are generating swings and misses at a rate well above league-average and his curveball (38th out of 61) is just as impressive. When you take a closer look at the unique combination of elite velocity, movement, and whiffs-per-swing that Davis brings to the table using the PITCHf/x database, it’s easy to see why he’s been the most dominant late-inning reliever in the game over the past two seasons.

Now, let’s examine Familia. I’ve excluded Familia’s four-seam fastball from the mix simply because he’s dramatically reduced his dependence on it recently, using the pitch less than 10% of the time in every month this season since April.

Not only did Familia’s sinker rank fourth out of 131 relievers who have thrown the pitch at least 100 times this season, but only legendary sinker mastermind Zach Britton (30.86%) generated a higher percentage of whiffs-per-swing. The sinker may be Familia’s bread and butter, but let’s not overlook the ungodly whiffs-per-swing rate on his slider (seventh out of 160 relievers). Much like Davis, the combination of premium velocity and movement, resulting in frightening whiffs-per-swing rates, is what make Familia so deadly.

Coming into the year, Familia boasted a pair of truly elite swing-and-miss offerings (sinker and slider) and proceeded to add the most unhittable splitter in baseball (given its unique velocity) to his arsenal mid-season. Scary. When we look back on Familia’s career, it’s hard to envision a scenario in which we won’t remember the 2015 campaign (and his performance in the playoffs) as his opening act.

The path to the closing role was certainly unconventional for both Davis and Familia, but given their dynamic arsenals and statistical results over the past two seasons, there is no reason they shouldn’t be ranked among the top-five closers in fantasy baseball heading into the 2016 season.