On a night when we all expected to witness the latest in a series of transcendent performances by Chicago Cubs ace Jake Arrieta, a pitcher who seems impervious to superstition, centuries-old curses involving a goat, and (perhaps more importantly) opposing hitters, it simply never materialized. The former Oriole, who had given up just two earned runs in his previous 10 starts (including a streak of 31 scoreless innings), was charged with four runs and lasted just 5 2/3 innings. Instead, it was the Cubs offense that responded with six home runs to push St. Louis to the brink of elimination in the NLDS. Needing a win to keep their playoff hopes alive, the Redbirds originally intended to hand the ball to 28-year-old right-hander Lance Lynn for Game Four, but will instead turn it over to veteran John Lackey, their Game One starter, in the Windy City tonight.

Lynn, who will likely be the first arm out of the 'pen this evening, finished the 2015 regular season with a 12-11 record (relevant for fantasy purposes only) in 31 starts with a 3.03 ERA, 1.37 WHIP, 167 strikeouts (8.57 K/9), and 73 walks (3.49 BB/9) over 175 1/3 innings of work. According to the end-of-season valuations compiled by my Baseball Prospectus colleague Mike Gianella (who won both Tout Wars NL and LABR Mixed with Bret Sayre this year), Lynn earned $13 in NL-only formats, ranking as the 37th-most-valuable pitcher in the senior circuit this year.

At first glance, 37th doesn’t sound very impressive, but when you take into account that 108 hurlers are owned in a standard 12-team NL-only league if every team rosters nine pitchers, that makes Lynn one of the better fantasy starters in the pool. BP’s fantasy overlords Bret and Mike were very aggressive on Lynn coming into the year, ranking him 113th (SP27) in their Top 300 pre-season rankings, slotting him 33 spots higher than his ADP (146) at the time. There’s no doubt that their faith in him was rewarded, and Lynn could be a top-30 starter in mixed leagues in 2016.

However, before we gaze into what the future may hold, lets take a step back and take a closer look at Lynn’s 2015 campaign. In case you’re not familiar with his recent work, his transformation into a younger, bearded, country-fried, version of Bartolo Colon, who is a lock to start filming those “Most Interesting Man In The World” commercials the moment he retires, has been a smooth one to say the least. The process began last season when he virtually abandoned his secondary arsenal (most notably his curveball and changeup), electing to attack opposing hitters almost exclusively with a neverending barrage of four-seam fastballs, sinkers, and cutters. Simply put, Lynn’s affinity for the heater has only increased in 2015. 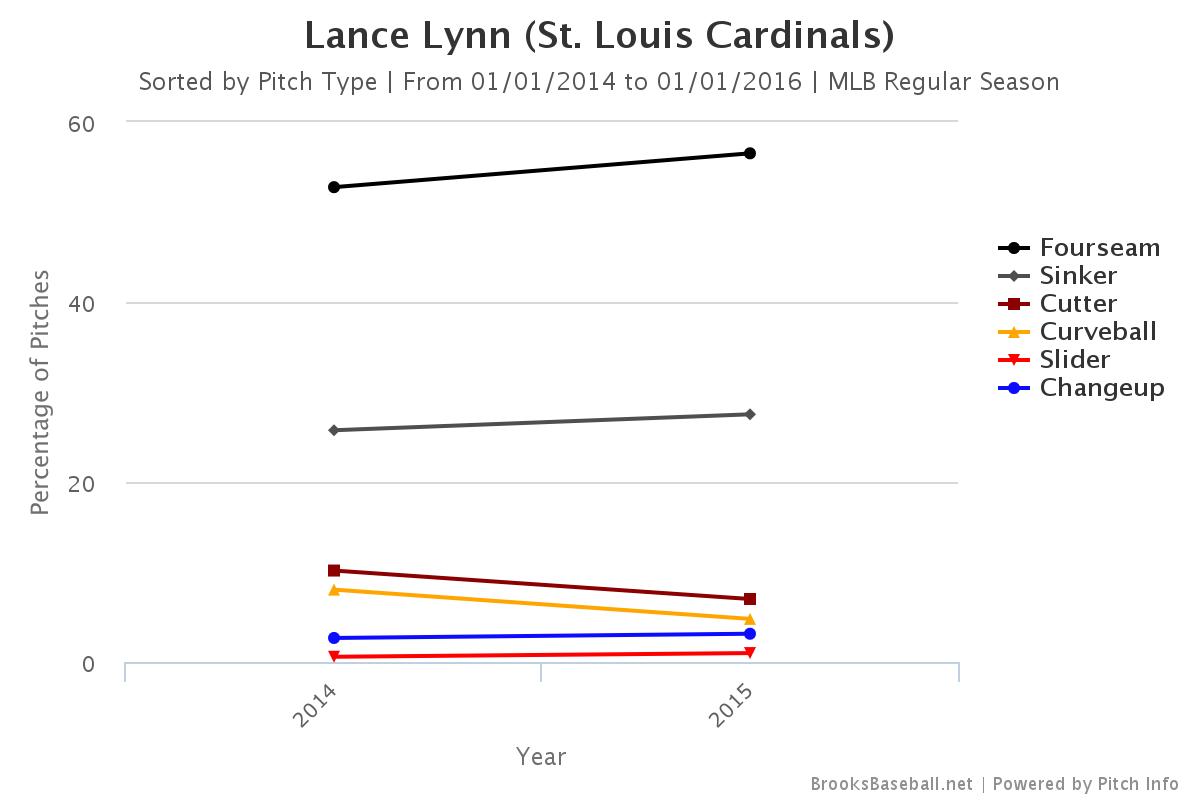 The PITCHf/x data at Brooks Baseball recorded Lynn’s fastball usage an even higher 91.12% rate this season, and no starting pitcher threw a higher percentage of fastballs, according to Fangraphs' database. The only real difference in the data (which is minor, but worth pointing out) appears to be that Brooks Baseball classified fewer of Lynn’s cutters as sliders than FanGraphs did.

To put that in perspective, the only starters who come even remotely close to matching Lynn’s propensity for the hard stuff are the immortal Colon (83.8%) and Mike Pelfrey (73.2%). No other qualified starter cracked 70% fastball usage during the 2015 season. No matter how you choose to slice it, the 28-year-old is quickly becoming a one-of-a-kind fastball specialist, despite an average fastball velocity of just 93 mph.

If you’re going to survive throwing 91% fastballs, you’re living on the edge. Literally, it turns out. Much like Colon, it isn’t the velocity that enables Lynn to be effective, it’s his ability to locate his assortment of fastballs low and away, on the outer fringes of the strike zone (see the zone profile charts courtesy of Brooks Baseball below) and being able to throw any one of the three varieties in any count or situation that make his seemingly bizarre approach work.

In an article written late last month on KSDK.com, columnist Dan Buffa provided the perfect summary of the quintessential Lynn experience, stating that he was “a guy who can eat innings, pile up the strikeouts and generally wear down an opponent with his assortment of fastballs. Each heater carrying a different coat of paint that drips left or right.” 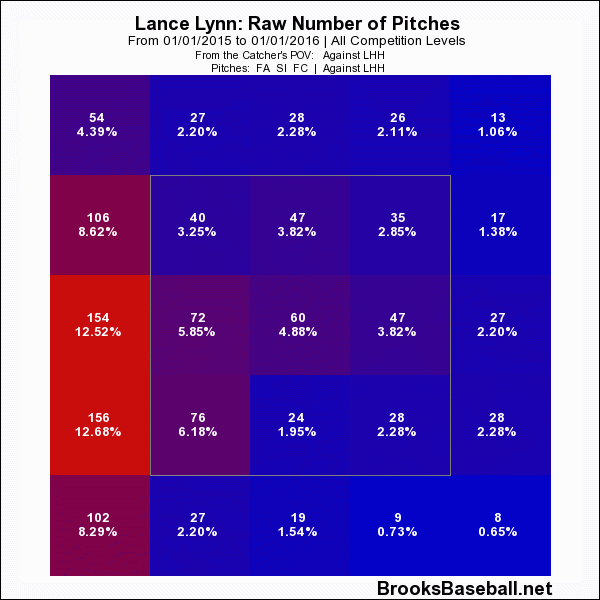 Now here is his zone profile against right-handed hitters: 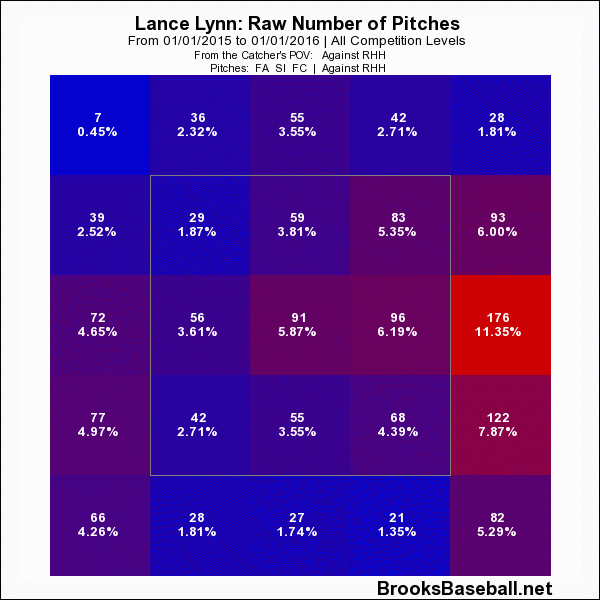 What separates Lynn from his fellow fastball aficionados, and makes him a valuable fantasy asset is his ability to rack up strikeouts despite the absence of an offspeed or breaking pitch. Since his permanent move to the Cardinals rotation back in 2012, he’s averaged nearly a strikeout per inning (8.64). So how is he getting it done?

Earlier this season, my Baseball Prospectus colleague Dan Rozenson published a stellar article in which he calculated updated benchmarks for each pitch, using the PITCHf/x data from the 2014 season. Here is where Lynn stacks up this season against the league-average whiffs-per-swing rates of four-seamers, sinkers, and cutters from a year ago.

Among starting pitchers (minimum 200 pitches) this season, Lynn’s whiffs-per-swing rates on both his four-seam fastball (10th out of 197 starters) and cutter (13th out of 58 starters) venture into elite territory. Even his sinker (36th out of 140 starters) boasts an above league-average rate of whiffs-per-swing.

Lynn is an odd bird. There isn’t really anyone else like him in the game today, besides the 42-year-old Colon. On the surface, there is a lot to like from both a scouting and statistical standpoint; however, from a fantasy perspective, when you take a step back and analyze him, it’s nearly impossible to forecast the Ole Miss product improving dramatically anytime soon. That sounds pessimistic, I know, but let’s keep in mind that barring the sudden emergence of a quality offspeed or breaking pitch (which is unlikely at this point in his career) to complement his fastball repertoire (which is already generating astronomical whiffs-per-swing rates), his strikeout rate is likely remain where it has been for pretty much the past four years. That's not a bad thing at all, just reality.

The major area of concern where I would expect some regression next season is the ERA department. Lynn’s sterling 3.03 ERA this season ranked 16th out of 141 pitchers who threw at least 100 innings. However, according to Baseball Prospectus revolutionary new metric, Deserved Run Average (DRA), he was (for lack of a better term) lucky to give up as few runs as he did. Lynn’s 4.26 DRA (82nd out of 141 starters) implies that he was fortunate to post an ERA that started with a three instead of a four. The 1.23-run gap between his ERA and DRA was the eighth highest of any starter in baseball, and he was one of only 11 starting pitchers who outperformed their DRAs by more than a full run in 2015.

Baking in a little regression in his rate stats isn’t a bad idea going forward. If you take a look at his current cFIP, a predictive pitching metric developed by Jonathan Judge, it projects Lynn (97 cFIP) to be an average pitcher (95-105 cFIP) going forward. Not to go all “Bill Belichick” on you, but there is a little bit on an “it is what it is” feel to Lynn’s profile. He projects as a league-average starter rate-wise (4.00 ERA, 1.30 WHIP), capable of throwing 200 innings consistently, while striking out nearly a batter per inning. That may not sound like an exciting profile (I just used the word “average” a bunch of times), but as you can see from what he earned in NL-only formats this year, “average” has significant value.

What we can safely forecast heading into 2016 is that there is a high degree of probability that Lynn will not evolve into a superstar overnight. However, he remains one of the easiest starters to project given his profile of fastballs and nothing but fastballs, and the fact that the statistical results he’s generated have changed so little over the past few seasons. That limits the range of potential outcomes (barring injury or loss of role) significantly, and as such, makes him one of the safer fantasy options to target in the NL.