“The knuckleball is the only pitch in baseball that works by doing nothing. Curveballs curve. Cutters cut. Sinkers sink. The knuckleball? You want to float it to the plate, rotation-free, and let the laws of entropy or aerodynamics or whatever else is in play take over from there, the air rushing around it, the seams creating a drag, the ball wobbling and wiggling and shimmying and shaking. Or not. Sometimes the knuckleball will be unhittable and sometimes it will be uncatchable, but rarely is it predictable.” –R.A. Dickeym, “Wherever I Wind Up”

Fantasy baseball owners are constantly searching for the signal within the statistical noise, as Baseball Prospectus alum Nate Silver would say. Oftentimes, we find ourselves locked in a struggle to distinguish which (if any) of the variable—whether they are positive or negative statistical indicators or anecdotal factors (for example: a change in mental approach at the plate, a new workout regimen, a new pitch, changing teams) we have at our disposal to evaluate hitters and pitchers—are actually affecting player performance. This critical element of our analytical process directly impacts the decisions we make in regard to our fantasy rosters.

As we attempt to draw conclusions and value both hitters and pitchers, we must remain cognizant of the old adage, “correlation does not imply causation.” Just because two variables have a statistical relationship with each other does not mean that one is responsible for the other. It is always a smart decision not to jump to conclusions, but with nearly four years of data (nearly 900 innings) at our disposal to evaluate, it’s reasonable to conclude that we’ve learned something significant about the relationship between knuckleballer R.A. Dickey’s average velocity and his statistical performance.

A knuckleball fired towards the plate with greater velocity will obviously give a hitter less time to react, which not only increases the likelihood that they will swing and miss entirely, but it also reduces the probability that they will be able to square the ball up and drive it as opposed to a knuckleball coming in with diminished velocity. What distinguishes Dickey from the other great knuckleballers of the past, like Tim Wakefield, Charlie Hough, Tom Candiotti, or the Niekro brothers (Joe and Phil), is that he throws his knuckleball much harder than any of them ever threw it. When his average knuckleball velocity has hovered around 77-78 mph, he’s been among the most dominant pitchers in the game for extended stretches since 2012. The problem for Dickey over the past few seasons is that he’s been unable to rediscover that peak velocity, until now.

When Dickey won the 2012 NL Cy Young Award, he posted a 20-6 record along with a 2.73 ERA, 230 strikeouts (8.86 K/9) and just 54 walks (2.08 BB/9) over a career-high 233 and two-third innings of work. The widely-held consensus, not only in the fantasy industry, but among traditional baseball analysts as well, was that Dickey would be hard pressed to repeat (or even come close) to reaching those statistical heights ever again after he was traded to the Toronto Blue Jays in the ensuing offseason.

In retrospect, Dickey’s stellar campaign is an undisputable albatross compared to his more recent performance. In the two-plus seasons he’s spent north of the border, his ERA is just a shade under 4.00 (literally 3.99, to be exact), while he’s experienced a slumping strikeout rate (6.60 K/9), step back in control (2.88 BB/9) and a substantial increase in home runs allowed (1.20 HR/9).

On the surface, those clamoring for regression several ago have absolutely been proven correct, but not for the reason you would expect. Dickey’s precipitous statistical decline in a Blue Jay uniform has coincided with a drop off in velocity on his signature knuckleball. At first glance, you would likely assume that velocity would matter less for a knuckleballer, like Dickey, than almost any other pitcher in baseball. However, that simply isn’t the case. Based on the sample size, which spans nearly 900 innings, dating back to the start of 2012, there is a substantial relationship between the average velocity of Dickey’s knuckleball and his surface statistics. 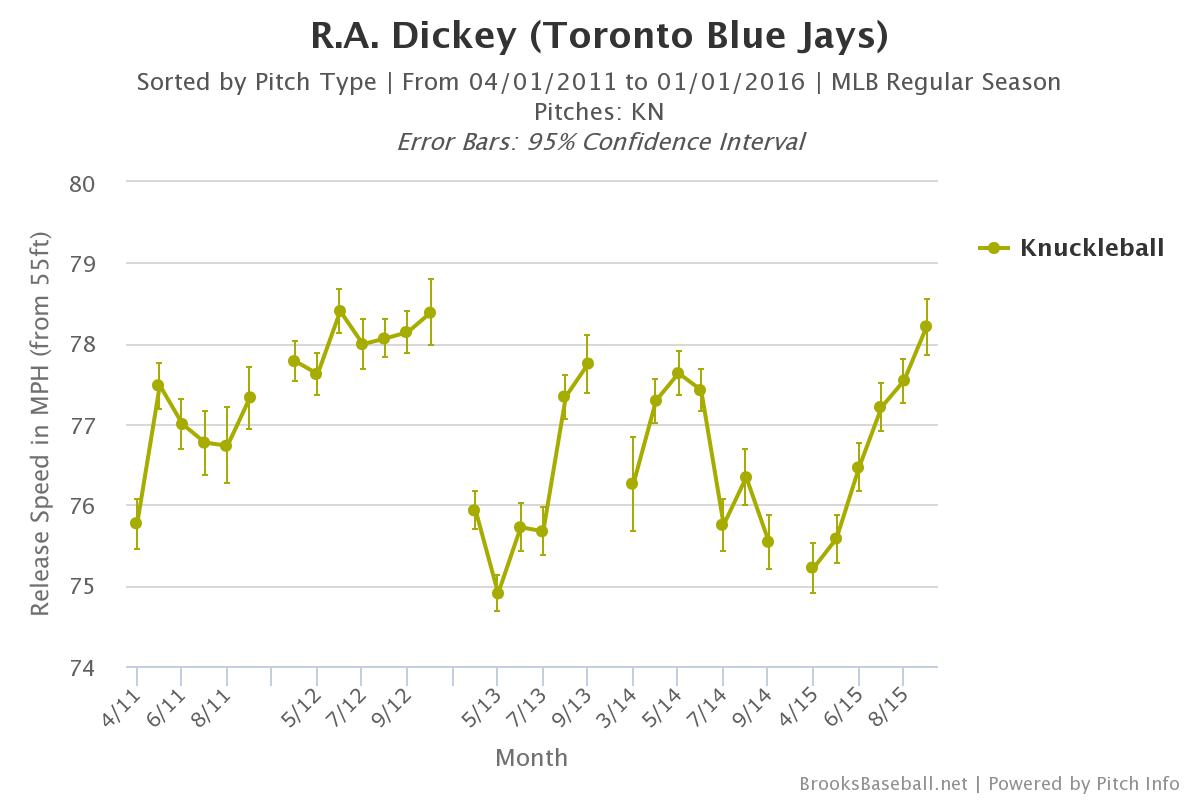 Inexplicably, the 40-year-old has experienced a renaissance second-half thanks to the return of the “hard knuckler.” In 13 starts after the All-Star break, he’s gone 7-1 with a 2.98 ERA and 51 strikeouts (5.24 K/9) while issuing just 17 free passes (1.75 BB/9) and giving up just eight home runs (0.82 HR/9) in 87 and two-third innings. The catalyst for his late-season surge has been the dramatic increase in his knuckleball velocity, which has rocketed up to 77.85 mph. Over the last two months, Dickey has thrown his knuckleball harder than at any point since 2012, and it’s no coincidence that his performance has improved as a result. 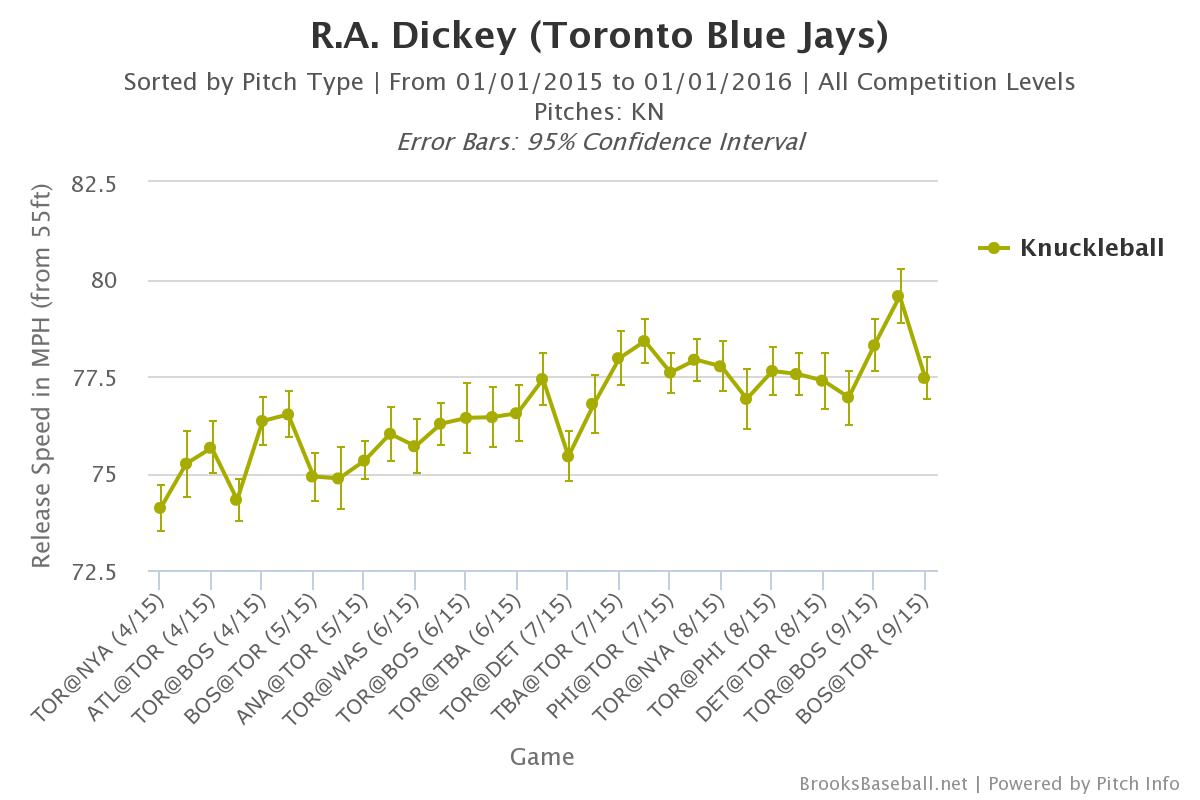 In an article written by Howard Megdal at Sports On Earth last May, Dickey himself acknowledged the negative impact that diminished knuckleball velocity has had on his performance in recent years, specifically when it came to his ability to throw the pitch for strikes.

“The speed I feel most comfortable with, throwing a strike, is that 76, 77 mph knuckleball," Dickey said. "That's the one I feel if that can be the mean, especially for the year, then I feel that can be successful. It's when that starts to creep down that I have trouble throwing it for strikes, because the release point's different.”

Not only has Dickey’s control improved dramatically in the second half of the current campaign as his velocity has increased, but he’s also starting to generate more swings and misses and weak contact as well. One of his most recent outings against the Cleveland Indians on Sept. 2 (a complete game in which he allowed just one run on four hits while striking out six) is a prime example of the “hard knuckler” in action. Of his six strikeouts, four came on knuckleball’s traveling in excess of 78 mph.

A 41-year-old knuckleballer pitching in the AL East will be relatively easy to write off completely on draft day in 2016. Just like he was this year. According to FantasyPros 2015 average draft position data, Dickey was selected on average as the 65th starting pitcher off the board this spring, behind several notable underachievers/busts like Cliff Lee, Matt Shoemaker, Collin McHugh, Mat Latos, and Doug Fister (just to name a few). When my colleague Mike Gianella’s end-of-season valuations come out, it’s a virtual lock that Dickey will have outperformed his average draft position.

The sheer volume of innings Dickey is capable of providing are invaluable in a rotisserie format. Since the start of the 2012 campaign, only James Shields (133 with three different organizations) has racked up more starts than the 132 Dickey has piled up between New York and Toronto. The expression is tired, but remains just as true today as it was in the past, knuckleballers can literally pitch forever. Those innings have tremendous value, especially when you consider that it will cost next to nothing to acquire his services for your team.

Replacement-level mainstream fantasy owners (see what I did there) will always be looking for the “next big thing.” It’s become an obsession in the fantasy sports industry, to snag the trendy breakout candidate instead of focusing on the un-sexy veteran late-round values, like Dickey. It’s not quite a full-blown market inefficiency, but mining for veteran pitchers who fantasy owners don’t hold in high regard because of a perceived “lack of upside," (especially in keeper and dynasty formats) can be extremely profitable.

The critical variable to monitor, the one that will likely determine whether he is merely a back-end of an AL-only rotation commodity or a surefire mid-rotation mixed-league asset, is Dickey’s knuckleball velocity. If he’s got it working in spring training and he’s healthy physically, there’s no reason to shy away from him on draft day next season.

I leave you with this: a simple R.A. Dickey “fortune cookie” to remember for 2016.

"R.A. Dickeym."
Reply to ADprospectus
bleaklewis
I wonder will he be able to keep this velocity up next year? I dont remember reading about or hearing about any injury issues headed into this season that could've affected his velocity.
Reply to bleaklewis