Many modern baseball fans are accustomed to making generalized assumptions about players based upon their statistical profiles. Guys with above-average strikeout rates have great stuff (hey, Joe Kelly) or a swing-and-miss repertoire. Similarly, a low walk rate is commonly used as evidence for someone having plus command. If a pitcher has both qualities, common sense suggests that he’ll be a quality arm.

Jeff Samardzija owns a career 21.6 percent strikeout rate and has dramatically slashed his walk rate over the past two years. His fastball sits in the mid-90s and his career swinging-strike rate is above the league’s average at 10.4 percent, though it has increased since moving to the rotation in 2012. The right-hander posted a 2.99 ERA a year ago and was a top-20 fantasy starter; thus, when the Chicago White Sox traded for him prior to the 2015 season, many fantasy owners assumed he would help form a fearsome duo atop the club’s rotation.

Instead, the 30-year-old has scuffled to a 5.27 ERA, which is the second-worst mark amongst qualified starters. He’s the 149th-ranked fantasy pitcher in ESPN leagues. Things have blown up even further in the second half. Samardzija is doing his best to limp into the offseason, but he’s allowed 60 earned runs in just 72.2 innings since the All-Star break. Only seven big-league starters have dished up more than his 27 homers on the year, though 15 of those have come in the second half.

At a cursory glance, it appears that Samardzija has dramatically declined this year because he’s lost his stuff. That is, his strikeout rate has dropped from 8.28 K/9 (or 23.0 percent) to just 7.00 K/9 (or 18.0 percent) over the past two years, respectively. His home run problems can be tied to being more hittable, or whatever.

What doesn’t seem to be a problem is his command, thanks to a minuscule 5.7 percent walk rate. The former Notre Dame star has thrown strikes, but hasn’t had good enough stuff to miss bats and keep guys off the base paths.

However, that argument doesn’t account for the fact that Samardzija has actually displayed poor command this year. He continues to throw strikes, for the most part, but has missed badly within the zone, especially to left-handed batters.

Here’s where he historically has located his pitches against lefties: 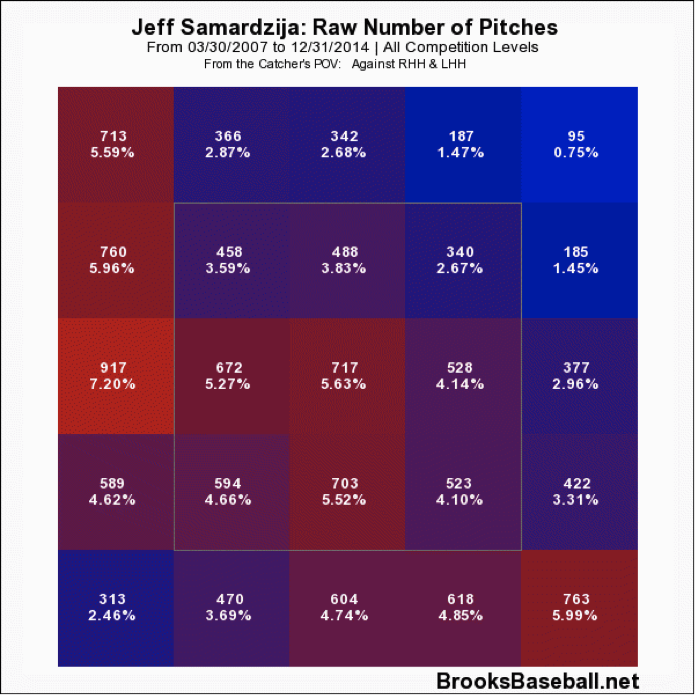 Samardzija generally stays away from lefties, even staying off the plate more than anywhere in the strike zone. Occasionally, it appears that he has tried to bury breaking balls at the feet. More often than not, though, the right-hander looks to work away-away and keep pitches away from lefties’ power zone.

This year, though, that has changed: 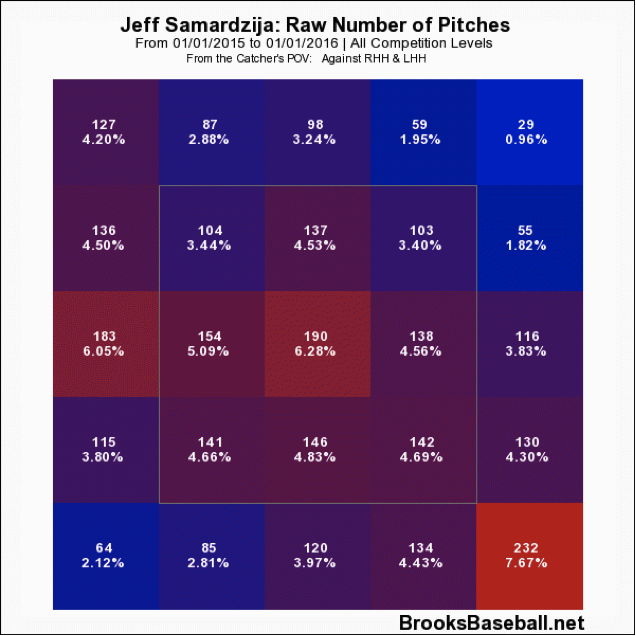 He’s more in the middle of the zone and hasn’t worked away off the plate as often. In short, he’s thrown more “bad strikes” to lefties, and they’ve taken full advantage. One must consider that 19 of his 27 homers have come against lefties. They’re slugging .523 against Samardzija this year, compared to just .393 for righties.

Still, the numbers would suggest that the right-hander has actually shown good command against opposite-handed hitters, as his 2.64 BB/9 walk rate is less than the league’s average walk rate for starters. The above heat maps, though, illustrate what’s really happening. He’s been loose within the zone and has thrown bad strikes. Lefties—and righties, to a lesser extent—have punished him for being less refined on the mound.

It could be that Samardzija has been a bit worse against lefties because he’s featuring his cutter more than ever, something that could explain why he’s missing glove-side more often than in previous years.

As the table clearly illustrates, his cutter percentage has grown. Of course, it’s perhaps not that simple. The frequency with which he threw his cutter to lefties began to increase a year ago, when he posted a 2.99 ERA and was one of the better starters in baseball. Thus, it’s perhaps dangerous to draw a direct causal arrow. But it should be noted that a cutter would break in toward left-handed hitters, so missing more in the middle of the plate rather than the outer third would make sense with increased cutter usage.

Whether his cutter is a primary culprit for these command issues within the zone, it remains clear that Samardzija’s struggles are not a statistical fluke or simply tied to increased BABIP or a lower ground-ball rate (though both help). The right-hander has genuinely been poor because he’s been loose within the strike zone and has thrown too many fat pitches to quality hitters. Mid-90s stuff doesn’t fool batters when it’s in the middle of the zone.

For the last couple weeks of the season, it seems that many people still believe in Jeff Samardzija, or at least are afraid to drop him. He’s still owned in 66.7 percent of ESPN leagues. Being a big-time name will help that ownership rate to avoid a nosedive. Still, he’s been one of the worst qualified starters in Major League Baseball this year and has been one of the biggest busts in fantasy. His 104 cFIP projects him to be below average for the final couple of weeks, too.

Since the trade deadline has passed for single-season leagues, this sell advice can be synonymous with cut. There are only two weeks remaining in the 2015 season. No sane fantasy owner is running him out week after week at this point, and there’s no reason to stash him on the bench for when he turns around. Dump him and grab someone off the waiver wire to help for the final couple scoring periods.

For dynasty-league owners, though, it’s more complicated. No one can deny Samardzija’s powerful fastball or his past success a year ago. Still, he’s extremely volatile and crafty owners will be looking to “buy low” in hopes that he can bounce back. Shop him heavily this offseason. In two of his last three seasons, he has posted an ERA over 4.30. He was great in 2014; however, it’s become clear that his command within the strike zone is poor. That’s what got him in trouble in 2013 and 2015. Let some other owner take the gamble that something will randomly click next year. There is no guarantee the right-hander will return to his 2014 form, as no consistent track record of success exists. As he enters his early-30s, it’s best to cut bait and let someone else cross their fingers.

You need to be logged in to comment. Login or Subscribe
JackCecil
Hey JP, great article! just noticed that your pictures are actually of Samardzija against both lefties and righties. I've had this issue using Brooks, you have to do the date, and then click which side you want the batters on before second, otherwise it resets the top bar to both. Here is what I was able to come up with for Shark.


against lefties in 2015
http://www.brooksbaseball.net/profile.php?player=502188&gFilt=&pFilt=FA|SI|FC|CU|SL|CS|KN|CH|FS|SB&time=month&minmax=ci&var=count&s_type=2&startDate=01/01/2015&endDate=12/26/2015&balls=-1&strikes=-1&b_hand=L
Reply to JackCecil
jimmyb1799
Thanks for this. I did have them isolated when I first pulled up the data points, so I'm unsure where I crossed my lines. Thanks for dropping the correct links here.
Reply to jimmyb1799
rrvwmr
I would without a doubt start him vs the Tigers today.
Reply to rrvwmr
oldbopper
I hope you did! haha
Reply to oldbopper
jimmyb1799
Unfortunately for you, our comments system shows your posting time.
Reply to jimmyb1799
onegameref
I guess he wanted to prove the critics wrong today. Went out and tossed a one-hitter with no walks. As close to perfect as he could be. I assume he will get one or two more starts this season to try and plump up his value to potential suitors in the offseason. I think the Sox have a real dilemma on whether to offer the required contract and have him reject it to receive a draft pick. Chances are he will get a multi-year offer from someone making the one-year offer from the Sox worth rejecting. He would likely be better off away from Chicago.
Reply to onegameref