Coming off a stellar sophomore campaign at just 23 years old—in which he slashed .269/.317/.455 with 72 runs scored, 23 home runs, 85 RBI and three stolen bases—Marcell Ozuna was a budding fantasy superstar entering the 2015 season. Then, like a comet streaking across the night sky, he suddenly vanished. What happened and more importantly how should fantasy owners value him going forward?

The metaphorical wheels came off the wagon when Ozuna hit just .249/.301/.337 with just four home runs in 322 plate appearances through July 7th, and he was demoted to Triple-A New Orleans. His signature light-tower power, a rarity in today’s scarce offensive climate, had seemingly evaporated overnight and he stopped hitting for power virtually altogether. A year ago, his .455 slugging percentage ranked 36th out of 149 hitters with at least 500 plate appearances, putting him in the same class as elite sluggers Josh Donaldson, Robinson Cano, Ryan Braun, and Jose Altuve. Less than four months into his follow-up excursion, he was riding busses in the Pacific Coast League. Upon his return in mid-August, he compared his six-week stint to being “in jail.”

The most frightening aspect of Ozuna’s struggles at the plate was that there was no discernable red flag when it came to his approach at the dish prior to his demotion (aside from the whole not hitting for power thing). He’s never been one to rack up free passes. His 6.5% walk rate was right in line with his prior career average and he had actually cut his strikeout rate to just 23% from 26.8% in 2014. So what happened? It turns out that the answer was right there in front of our eyes the entire time.

Despite displaying prodigious power, his staggeringly high 50% ground ball rate, which ranked 29th out of 139 hitters with at least 500 plate appearances, during his breakout campaign was the harbinger of things to come that we overlooked at the end of last season. As evidenced by the fact that Hunter Pence and Ian Desmond were the only other hitters to slug 20 home runs while also posting a ground ball rate above 50% last season, it’s extremely hard to put the ball over the fence when you hit the ball on the ground that often.

As you can see from the data over at Brooks Baseball, Ozuna’s lack of fly balls has become an even bigger issue sapping his power potential this season. 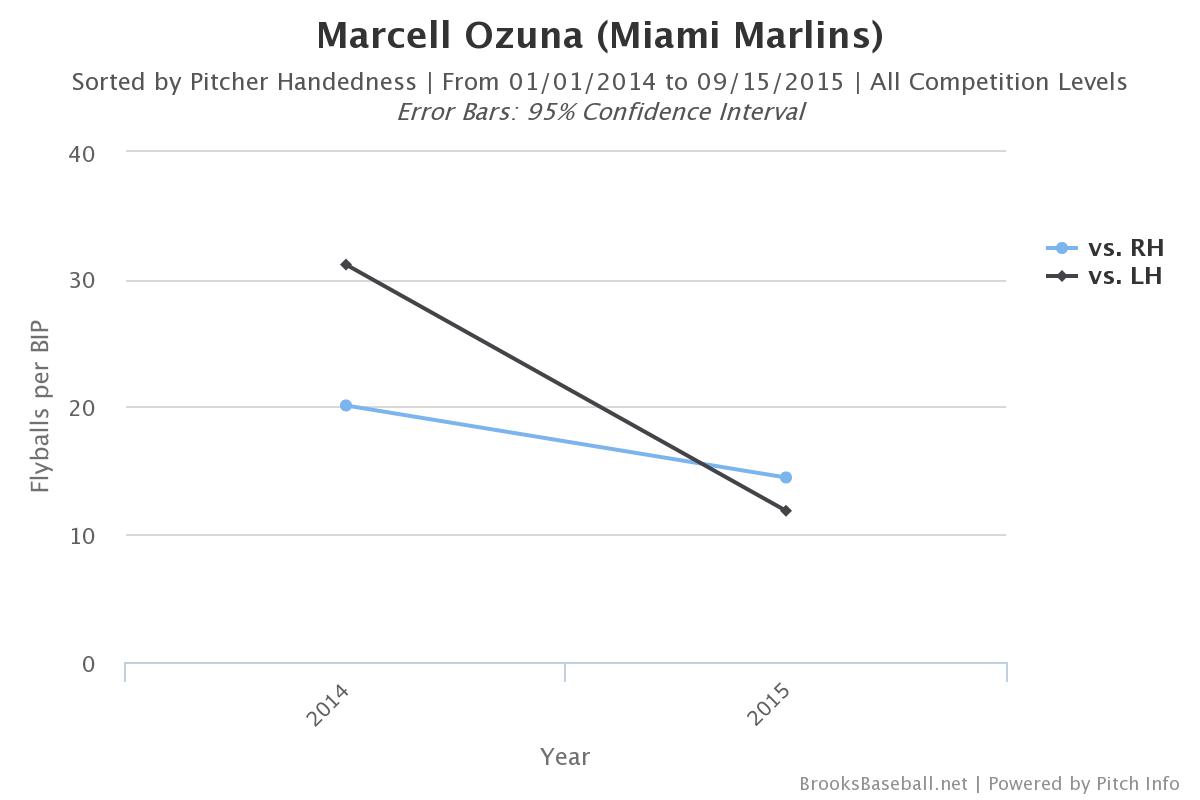 Ozuna’s 51% ground-ball rate this season has also coincided with a steep decline in HR:FB ratio (down to just 9.3% from a superb 16.8% in 2014). In case you needed further evidence that it’s extremely difficult to hit 20 home runs when you’re posting a ground ball rate above 50 percent, here it is. Of the 49 players who are currently burning worms at a 50 percent clip, only Pedro Alvarez and Ryan Braun have eclipsed the 20-home-run plateau. As of writing this, both Russell Martin and Hanley Ramirez sit at 19 home runs. Simply put, Ozuna needs to start hitting more fly balls if he’s going to make a return to fantasy relevance next season.

One of the few things, which we cannot account for with a statistical formula, is the mental aspect of the game. How much did the Marlins handling of Ozuna (demoting him to Triple-A instead of letting him continue to make adjustments against big league pitching) adversely affect his performance this year? Did it even have an impact? We may never know what is going on inside a players head (although neuroscience is getting us closer than ever before), but judging from his early season offensive tailspin and the nature of his public comments after resurfacing later this summer, things just never got on track for him this year.

There will be plenty of trade rumors and speculation in the coming months, but the one thing fantasy owners can safely assume is that Ozuna will be starting in centerfield either for Miami or for another organization when you take a gander some of the atrocious outfield combinations currently being run out there right now. This isn’t a case of an aging slugger’s power slowly eroding, it’s a still developing young hitter who endured early struggles, a demotion to the minors and never got it back on track. What makes Ozuna a prime late round target for fantasy owners next season is that he will be entering the early stages of his physical prime and has already displayed the raw power necessary to hit 20-30 home runs. After a dismal campaign, risk-adverse fantasy owners will steer clear of him, especially in re-draft leagues. If you play in a keeper or dynasty league, Ozuna’s value will never be lower than it is right now. This is the type of lottery ticket to invest in given his age and raw tools. Flashes of the "old" Ozuna have still been there this season if you look hard enough.

It’s critically important to remember that Ozuna will be just 25 years old entering next season and is still developing as a Major League hitter. It’s not a cliché either, it’s the cold hard reality. He accrued just 47 plate appearances above High-A before making his big-league debut in 2013. He managed just 291 plate appearances before being shut down due to a wrist injury, which reportedly sapped his power. After a phenomenal 2014 season, this year was really the first time he experienced struggles against big league pitching in his entire career. It’s now up to him to make the necessary adjustments. Development is not always linear when it comes to hitting and pitching prospects. Assuming that Ozuna will be unable to make adjustments at the plate or ever tap into his raw power again because of 419 plate appearances of poor performance is the wrong approach to take long-term.

Fantasy owners shouldn’t write off a talent like Ozuna. Over the past five years, only 15 hitters age 23 or younger have hit as many home runs (23) in a single season as Ozuna did a year ago. Of that list, five hitters did it this year alone. The only ones to end up on the exclusive list multiple times are Mike Trout (FIVE TIMES), Giancarlo Stanton (three times), and Freddie Freeman (twice). That’s it. Talent-wise, Ozuna’s has already put himself in some pretty elite company for his age. Writing him off completely for fantasy purposes after an abysmal lost season seems like a huge mistake.