The standard age-development curve for pitchers has traditionally held that hurlers enter their primes when they’re 26-28. Recently, some research suggests that the aging curve is transitioning slightly toward the younger side of the spectrum, but the overall statement is still that one’s prime as a pitcher comes sometime between ages 25-27.

That’s why Wily Peralta’s improved performance in 2014 was so encouraging. As he approached his prime, the right-hander compiled a 3.53 ERA over 198 2/3 innings and was a two-win player for the Brewers. He finally controlled his walk rate and even showed signs of improving his strikeout rate. Such a step forward caused expectations to soar for Peralta in 2015. In his third full season with the club and at age 26, many thought a breakout season was on the horizon and Peralta would finally deliver on the significant potential that he’d shown in previous years.

Of course, the aging curve is a generalized trend that’s based on bulk data. It’s not representative of guaranteed improvement at the individual level. For Peralta, the latter part has held true, as his 4.55 ERA and 5.90 DRA signify massive degradation in performance. One could easily argue that the Dominican native has been below replacement level this year. In fact, BP’s DRA-based WARP suggests that he’s been a run worse than replacement level.

It’s not random variance, either. His BABIP is 24 points higher than it was a year ago, but the key negative factors have been velocity loss, decreased effectiveness with the slider, and a diminished strikeout rate.

On Tuesday against the Cleveland Indians, Peralta had nothing on the mound. His velocity cratered, which can readily be seen on this chart: 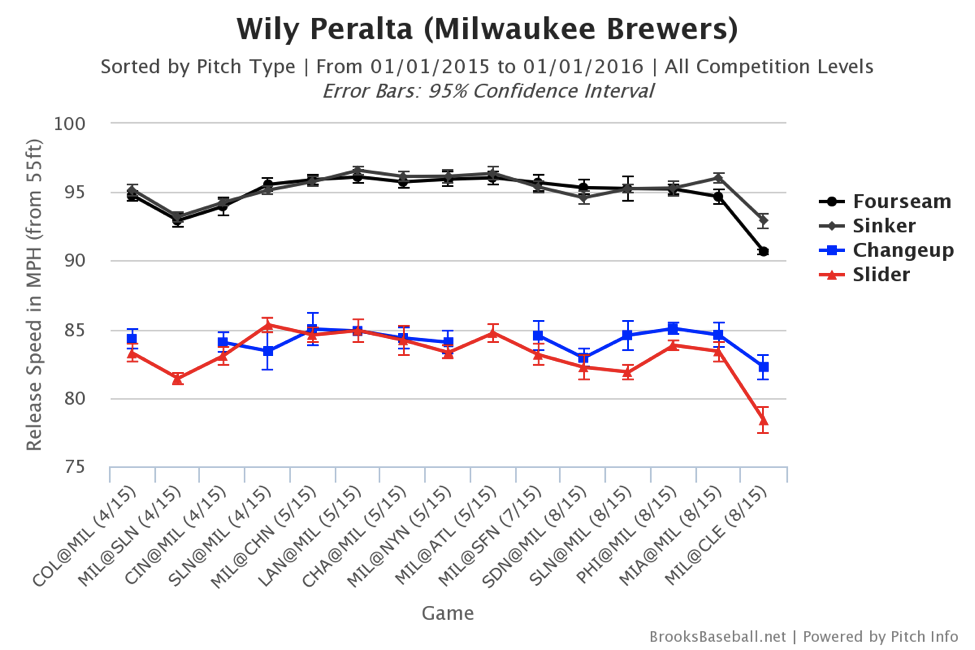 The dirty secret, though, is that Peralta has actually seen his velocity decline across the board this year. His average sinker velocity has dropped from 96.68 mph in 2014 to just 95.20 mph this season. The average velocity on his slider has slid from 86.38 mph to 83.38 mph. The coaching staff can talk about “dead arm” all they want. The overall numbers suggest that Peralta’s velocity has been a tick down all year. Perhaps it’s more than just a dead arm.

The slider has gotten worse, too, despite the fact that he’s throwing it nearly 30 percent of the time. His whiff rate on the slider has decreased to 11.14 percent, a four-percentage-point drop from the 2014 season and a career low. A ground-ball pitcher with spotty command cannot have his primary swing-and-miss pitch be declining. It spells all kinds of trouble. That trouble can be seen in his average batted-ball velocity, which is 23rd-worst in the league. At 89.89 mph, opposing hitters are squaring him up far more often than the average big-league pitcher.

Decreased velocity and fewer swings-and-misses have resulted in a dip in strikeout rate. His 5.08 K/9 is a career worst mark, and if he had thrown enough innings to qualify, he’d have the fourth-lowest strikeout rate of any starter in Major League Baseball. That’s a death sentence in fantasy baseball, especially if the pitcher doesn’t have another saving grace to make up the difference.

All of this could lead a fantasy owner to throw in the towel—and for good reason—but the other alternative is that Peralta is dealing with some kind of injury. He landed on the DL with an oblique injury. More recently, though, Brewers pitching coach Rick Kranitz suggested that Peralta is working through a dead-arm period.

The dead-arm argument makes sense, given his velocity on Tuesday evening. However, Peralta had already seen his velocity decline. It’s not new. This could mean that the right-hander has been struggling with an arm injury of some kind all season. Given Peralta’s historical repertoire variance, though, it’s difficult to ascribe the declined stuff to injury or variance. Perhaps it’s both. Who knows?

The bottom line is that Wily Peralta has too many question marks to own in the final month of the regular season. He’s not providing strikeouts, and if his velocity and secondary offerings are going to decline, he’s un-ownable in standard leagues. That’s hard to say about a guy who entered the season with so much promise; however, there are far too many question marks within his profile to give him anything other than a “sell” grade.

Maybe Peralta is a sneaky bounce-back candidate for the 2016 season. For the remainder of 2015, though, he’s not worth owning. He’s far below the league-average strikeout rate and doesn’t possess the run prevention to make up for that. He’s a drain in all four roto categories for starters. The trade deadline has passed in most leagues, but owners shouldn’t be afraid to cut ties with Peralta and put him on the waiver wire. If he’s dealing with injury and lands on the DL once more, pre-emptive action will have already been taken. If he doesn’t land on the DL, though, his decreased velocity and decreased strikeout rate will keep him from being missed. Gotta sell across the board on this one.