In retrospect, The “Year of the Rookie” will be remembered primarily for the unprecedented volume of prospects making an impact at the major-league level. As of this writing, 38 of Baseball Prospectus 2015 Top 101 Prospects have made an appearance in The Show. That number inflates (above 12.5 PSI, hopefully, #FreeBrady) to 46 if you’re using Baseball America’s preseason Top 100 Prospects list. Absurd.

It isn’t just the depth of this year’s crop that’s astounding. It’s the glut of elite fantasy sluggers emerging from the cornfields in Carlos Correa, Kris Bryant, Kyle Schwarber, and Miguel Sano (just to name a few) that has been the real story this season. The infusion of dynamic talent has carried over to the mound as well, with electric young arms like Noah Syndergaard, Carlos Rodon, Luis Severino, Eduardo Rodriguez, Aaron Nola, Taylor Jungmann, and Steven Matz all showing flashes of elite fantasy potential.

Who haven’t we mentioned yet? Raisel Iglesias. He entered 2015 as Cincinnati’s second-best prospect, behind Robert Stephenson, according to Baseball America. He also failed to crack Bret Sayre’s preseason Top 101 Dynasty League Prospect List. To say that expectations were tempered for the Cuban import, attempting to make the transition from career reliever to MLB starter (at 25 years old) in less than a year, would be putting it about as bluntly as possible.

Without question, he’s received the least amount of hype and fanfare of any rookie starter in baseball. However, he may ultimately end up having the biggest fantasy impact (aside from Syndergaard) over the final month of the season. In virtually any other year, his stellar performance since rejoining the Reds rotation on July 11 would be considered one of the biggest storylines of the rookie class. Instead, it has barely even registered a blip on the radar, outside of the Buckeye State.

The parallels between Carlos Carrasco’s second-half surge last year and Iglesias furious finish to his rookie campaign are somewhat striking. Every so often, a starter will appear from the depths of the free-agent pool and help carry fantasy owners to a title with a string of quality starts. Last year it was Carrasco, who used his mid-season bullpen demotion to work with Indians pitching coach Mickey Calloway on pitching exclusively out of the stretch, which enabled him to consistently repeat his delivery. As a result, he was virtually unhittable over his final 10 starts, posting a 1.30 ERA with a 78-to-11 strikeout-to-walk ratio. This season, Iglesias appears to have made similar improvements and is poised to have a similar statistical impact for fantasy owners in the home stretch.

The early results were not encouraging for Iglesias, who made six appearances (four starts) before being demoted to Triple-A at the end of May. Despite striking out over a batter per inning, his poor command (3.28 BB/9), lackluster ground-ball rate (34%), and bloated 5.11 ERA left much to be desired. The biggest issue he faced was his inability to work deep into games, as he lasted beyond the fifth inning in just one start. After a nearly-two-month-long stint in Triple-A, Iglesias has looked like a completely different pitcher upon his return.

Over his last five starts, dating back to August 1, Iglesias owns a 1.93 ERA with 35 strikeouts and just eight walks over 32 2/3 innings of work. In addition to cutting his walk rate by a full batter per-nine, he’s sporting a near-elite 60% ground-ball rate and has gone at least six innings in every outing. 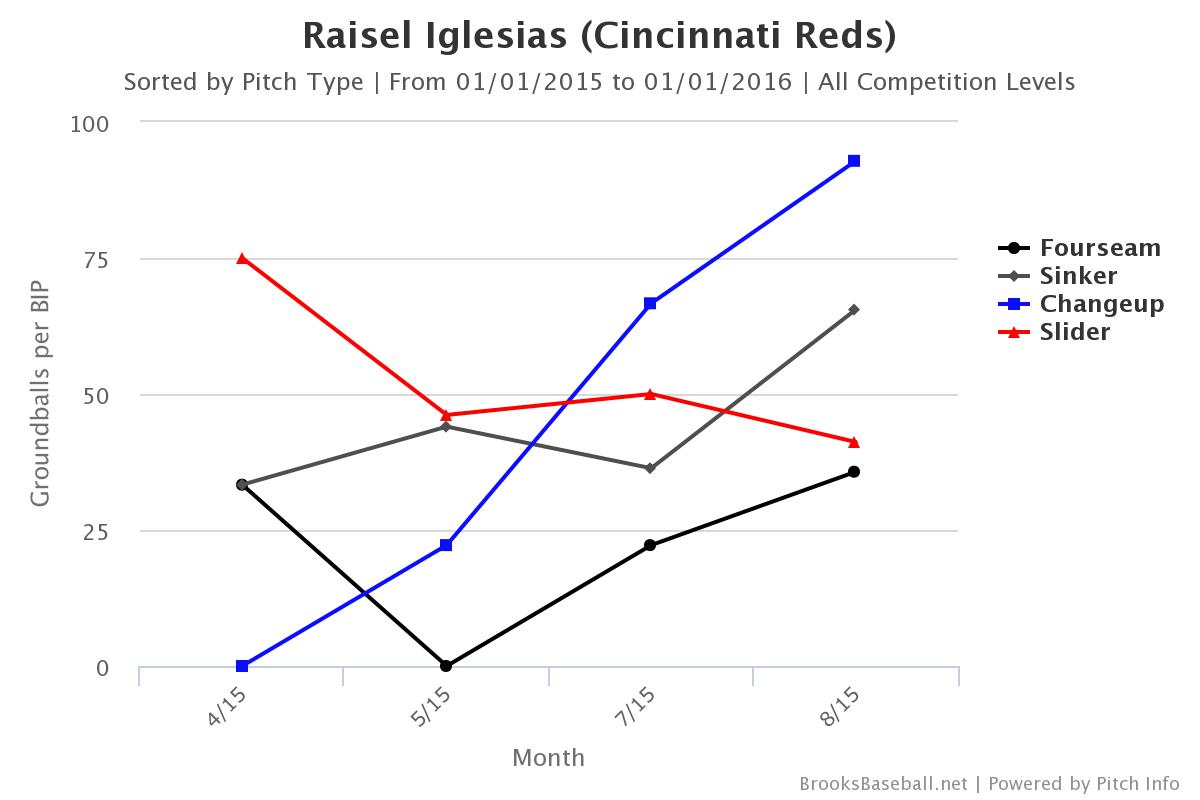 Comparing video from Iglesias early outings to some of his more recent starts; it doesn’t appear as though he’s made a dramatic transformation mechanically with his delivery. The biggest change appears to relate to how he’s attacking opposing hitters. He’s being more aggressive early in the count, throwing more strikes, and pitching to contact. In his latest outing over the weekend, Iglesias allowed just two runs (one earned) on three hits, while striking out a career-high 13 and issuing just three walks against Arizona. Of the 27 batters he faced, Iglesias went to a three-ball count just four times over seven innings of work.

“I was trying to attack them in the beginning,” Iglesias told MLB.com’s Andy Call over the weekend. “I was trying to get ahead of the hitters using my slider. My slider was working really well today as well as my changeup. My changeup has been working better the last few outings. I also mixed in the curveball.”

Granted it has led to an uptick in home runs allowed, but the new approach has also reduced his walk rate, led to an uptick in strikeouts, and enabled him to dramatically lower his rates (ERA and WHIP) overall. It’s extremely hard to quantify the mental side of the game, but given the results statistically and the fact that he’s working deeper into his starts than earlier in the year, it’s hard to discount a new approach and renewed confidence as the main catalysts for his recent performance. 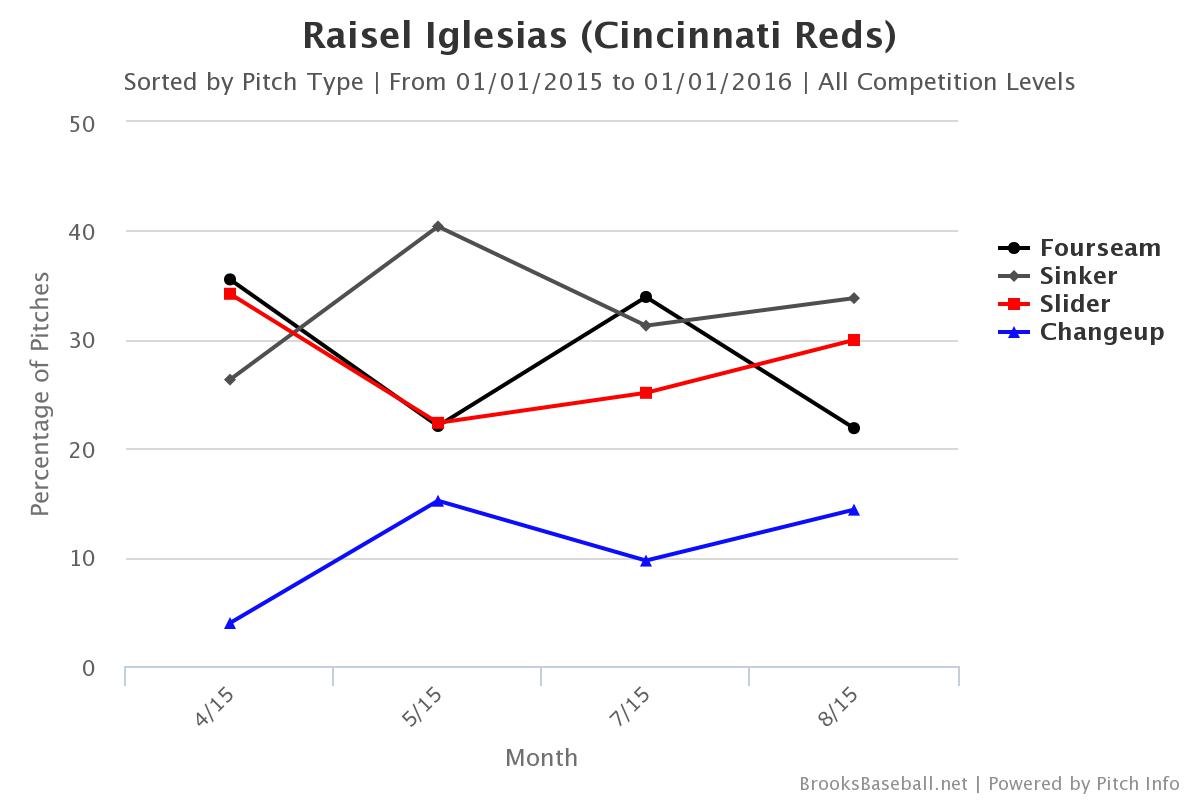 The pure stuff has been there from the start. Iglesias' arsenal consists of four quality offerings: four -eam fastball, sinker, slider, and changeup. One thing that you will notice right away by looking at his pitch usage chart (courtesy of Brooks Baseball) is that he’s relying more on movement with his breaking ball and off-speed repertoire now than he was earlier in the year. The recent uptick in his performance coincides with a newfound emphasis on his slider and changeup over the last month.

If you think White Castle sliders are delicious, then you’re going to love what Iglesias has put on the menu this year. His slider isn’t just his weapon of choice when it comes to putting away opposing hitters (nine of his 13 strikeouts over the weekend came on the pitch), it’s one of the nastiest crooked vultures in baseball. According to Baseball Prospectus PITCHf/x leaderboards, Iglesias' 43.54% whiffs-per-swing rate ranks eighth out of 106 starters in baseball this season. That puts him up there with elite slider artists like Clayton Kershaw, Tyson Ross, Max Scherzer, Francisco Liriano, and the aforementioned Carrasco (they’re a lot more similar than you think).

To put Iglesias' performance in greater perspective, out of 151 pitchers with at least 70 innings of work this season, his 3.74 Deserved Run Average (DRA) is the 43rd-best mark in the game. Only three rookie starters (Syndergaard, Jungmann, and Rodriguez) have posted a lower DRA this year.

Going forward, (barring rainouts) Iglesias is slated to face an onslaught of potent NL Central offenses down the home stretch. A pair of matchups against the Brewers and Cubs, along with outings versus the Pirates, Cardinals, and Mets are on tap for September. The good news for fantasy owners is that the Reds have no plans (as of right now) to shut him down, and despite being potent offenses, they all rank inside the top 15 in strikeouts this season. If you’re investing in Iglesias, don’t expect many wins on a dismal Reds squad, but the strikeouts should be there by the bushel over his final seven starts.

With the trade deadline in the rearview mirror in virtually all leagues and the window to pick him up off the waiver wire in deeper formats slamming shut with his performance over the weekend, fantasy owners who don’t own Iglesias at the moment should monitor him closely over the final month of the season and make him a primary target in the upcoming offseason, especially in keeper and dynasty formats. He’s flown under the radar virtually all year, but mainstream owners are starting to take notice now. He’s somehow still available in 70% of Yahoo! leagues at the moment. So, please, stop reading and go hit the add button in your league. Right now.

You need to be logged in to comment. Login or Subscribe
rjblakel
In redraft points league, where strikeouts help but bigger gains are around Wins and QS, would you rather have Iglesias, Leake, Medlen.
Reply to rjblakel
GeorgeBissell
I think the one thing Iglesias is definitely going to provide are strikeouts and he's registered five straight quality starts. There is always the chance Medlen gets bumped to relief with all of the options Kansas City has, so I would roll the dice with Iglesias.
Reply to GeorgeBissell
maphal
His pitches dance all over the zone and he throws from many arm angles. He's a lot of fun to watch.
Reply to maphal
ayzzya
Impossible to truly predict, but with this change in approach, do you see him being a solid contributor from the rotation for years to come?
Reply to ayzzya
GeorgeBissell
The issue with Iglesias was never the raw stuff. His slider is a true knockout offering thats a real weapon. The issue was whether or not he could make the transition from a reliever, which he was primarily in Cuba prior to this year, into a starter. It's a small sample sure, but it's not insignificant that he's working deeper into games and is experiencing far better statistical results since returning from Triple-A in July.

I think he's the perfect middle of the rotation starter for the Reds. I don't see a future ace here. However, much like Eduardo Rodriguez, I could see Iglesias settling in as a solid #2 or #3 starter for years to come. Fantasy-wise, the strikeouts are huge for his value and I think he's going to be a popular breakout pick for next season industry-wide like Carrasco was this past offseason.
Reply to GeorgeBissell