The downside of Twitter, most notably #CycleAlert, often outweighs its benefit, but every so often, it leads to an enlightening fantasy baseball discussion. Twitter is where I draw the majority of my inspiration because it is a forum where we can debate the big issues as they relate to fantasy baseball strategy and player analysis. The inspiration for this column took shape just a few weeks ago when Razzball’s Rudy Gamble commented on the factor he believes explains fantasy owners making smarter investments on the pitching side of their rosters.

What ensued was a lengthy (140-characters-at-a-time) discussion featuring input from a variety of the best and brightest minds in the fantasy industry. One of the many responses came from Baseball Prospectus’ very own Mike Gianella, who (along with Bret Sayre) hold a 12.5-point lead over the field in LABR Mixed with just over a month to go in the season. 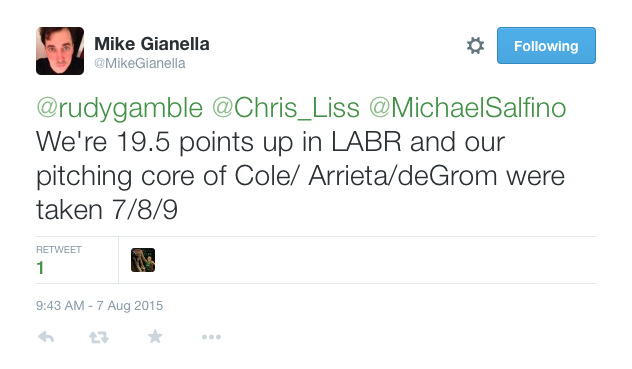 The point of the tweet was not to take a victory lap for landing a trio of studs in the middle rounds of an insanely difficult expert league, but rather to point out just how much elite starting pitching depth there is right now and how it will impact draft strategy going forward. It’s never too early to look ahead to next season, so let's briefly evaluate the crop of fantasy aces owners will be targeting in the early rounds of 2016 drafts.

Clayton Kershaw, Max Scherzer, Chris Sale, Zach Greinke, Felix Hernandez, Johnny Cueto, David Price, Corey Kluber, and Madison Bumgarner (healthy Stephen Strasburg as well) aren’t going anywhere at the top of the position. However, it’s hard to deny the ascent of younger studs like Jacob deGrom, Jake Arrieta, Gerrit Cole, Chris Archer, Dallas Keuchel, and Sonny Gray, who all deserve to be among the upper echelon of fantasy starters off the board next year.

There is still a month to go in the current campaign, and despite a slight offensive resurgence (especially in the home run department), the league average ERA currently sits at 3.88, which would be the third-lowest recorded mark since 1992, according to Baseball-Reference. While there may be a greater volume of quality pitchers in the game overall, there is certainly more depth at the top of the position than any point I can ever remember, given that I just rattled off 16 legitimate aces, around whom fantasy owners could build a pitching staff.

Dig a little deeper and you will find another mass of relatively young arms right on the cusp of stardom in Jose Fernandez (please get healthy…), Matt Harvey, Carlos Martinez, Noah Syndergaard, Carlos Carrasco, and Garrett Richards. Including the names I’ve just touched on, that takes us up to 22 starters, which is scary considering we are only scraping the surface of the position. Where do you rank someone with immense upside like Marcus Stroman? How about Michael Wacha or Shelby Miller? We haven’t even discussed Rangers aces Cole Hamels and Yu Darvish yet. Don’t forget Ricky Nolasco (just kidding). So, you see my point.

With the offseason rapidly approaching, a vast majority of fantasy owners will be too busy with fantasy football (#DraftAmeerAbdullah) to focus on drawing any conclusions from the previous baseball season. Don’t make that mistake. Taking the time to adjust and improve your draft strategy, or as our very own Jeff Quinton would expertly call it “our decision-making process” while the information is still fresh, before the football season kicks off, can help give you that slight edge that everyone is looking for to help them win their league.

At this point, you’re expecting me to say something along the lines of “wait on starting pitching” because you can still get an ace later on in a snake draft (like Mike and Bret did with their trio in LABR Mixed this year). Sure, that is a reasonable strategic position to hold going forward. They took the best value on the board at the time, but you can’t go into a draft just assuming that an ace is going to fall much later than they should or that next year will play out exactly like the previous one with so many arms emerging as elite options.

Of all the aces I just listed, if I had to target one name right now, it would be deGrom. He stands out as one of the best potential values on the board, not because there is a chance he will slip on draft day, but because you can make the case that he should be the second pitcher off the board after Kershaw (who I’m convinced is a robot from the future sent back in time to destroy opposing hitters dreams) and he likely won’t be selected that high. It’s hard to argue that deGrom is clearly a better option than someone with a longer track record like Scherzer or Sale, but lets stop for a moment and consider that he’s likely to provide just as much fantasy value as they will, but be available later on (even if it’s only a few picks) in a snake draft.

It’s actually quite shocking how similar deGrom’s 2015 statistics are, over the exact same number of starts, to the ones he posted in his stellar NL Rookie of the Year campaign a year ago. Through 22 starts, his 2.03 ERA represents the second lowest mark out of 91 qualified starters (trailing only Greinke and his absurdly-high 85.5% strand rate). He also ranks 14th with a 9.3 K/9, the product of 152 punchouts over 146 innings of work.

In addition to nearly replicating (and improving on) his breakout campaign, his average fastball velocity is up nearly a full mile per hour and he’s sliced his walk rate down from 2.8 BB/9 a year ago to 1.7 BB/9 this season. The all-around elite impact deGrom is capable of providing right now is nearly unmatched. It’s frightening to think that he’s just starting to reach his potential. 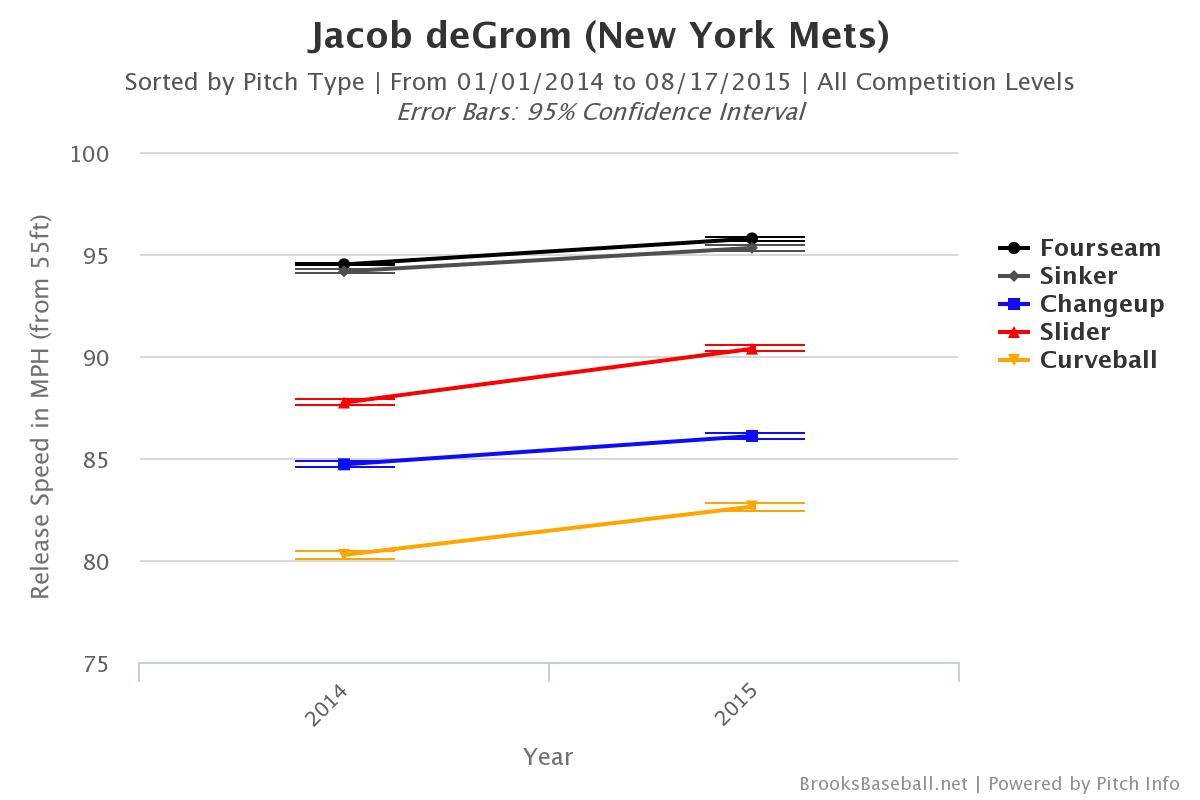 There are a few signature moments every year that make a lasting impression, which have a tendency to linger with us for years. deGrom’s moment came last month at the 2015 MLB All-Star Game in Cincinnati when struck out the side on just 10 pitches and hit 98 mph on the radar gun with his fastball.

Granted it was one inning, but it showed us that as good as he is right now, there is still the potential for him to take his game to another level. On a field of filled with superstars, deGrom looked like the best player in the game for a brief moment. To say that about a pitcher who was never a highly regarded prospect coming up through the system in New York and has fewer than 50 Major League starts in his career is downright crazy.

In five starts since the All-Star break, deGrom has allowed just six earned runs (1.64 ERA) while racking up 40 strikeouts (10.91 K/9) and issuing just seven free passes (1.91 BB/9). He’s gone at least six innings in every outing, whiffed at least seven batters in all five starts and allowed just 19 hits over 33 innings of work. It’s a small sample size, but its nothing out of the ordinary compared to what deGrom has done over the last two seasons.

We can’t predict the future, but what we know right now is that deGrom is really, really, good (and could continue to improve with experience). He doesn’t fit the traditional mold for a “value pick,” but if for some reason he isn’t the first pitcher off the board (not named Kershaw), then he could turn out to be one of the biggest steals in fantasy drafts next year.

You need to be logged in to comment. Login or Subscribe
Jadam2122
I'd also assume internal competition from the highly driven Matt Harvey will push him to a higher lvl. Those guys will really be pushing each other next year.
Reply to Jadam2122
Dodger300
I agree that DeGrom appears to be an excellent pick for next year.

However, I don't understand how it increases his value, to me as an individual owner, that he might fall a few picks later in a snake draft than some of the other comparable starters.

For example, let's say I pick fifth in a 12-team draft. I can choose to draft him with my fifth pick, or wait in hopes of getting him with the 19th pick.

Since he almost certainly won't be available at # 19, my real choice is to draft him fifth or not at all.

I see no increase in value for him that I might have gotten him in the eighth spot, or tenth, of even sixteenth, since none of those are options for me. It's either the fifth spot or nothing.

Can someone explain Ito me if I how I am looking at this wrong? Thank you.
Reply to Dodger300