Prospect-savvy fantasy owners knew that Carlos Correa had the potential to blossom into a superstar eventually, but nobody could have anticipated that he would burst onto the scene the way he has over the past two months, slashing .288/.349/.557 with 14 home runs, 31 runs scored, 37 RBI, and nine stolen bases in his first 54 games (235 plate appearances). An intoxicating blend of age, elite five-category production, and shortstop eligibility has Correa poised to rank among the top-10 most valuable commodities in re-draft leagues next season. However, it’s time to start seriously considering whether or not he deserves to be in the conversation with Mike Trout and Bryce Harper for the top-overall selection in keeper and dynasty formats going forward.

Setting aside the small sample size caveat (which certainly applies here), let’s acknowledge that Correa has already established himself as the top shortstop in fantasy baseball at just 20 years old. His .312 TAv ranks second (trailing only Brandon Crawford’s .315 TAv) among shortstops with at least 200 plate appearances this season. Only Crawford, Troy Tulowitzki, and the perennially underrated Jhonny Peralta, all of whom have nearly twice as many plate appearances, have hit more home runs this year. It’s not even much of a debate when you take a closer look at the current valuations, which matter more from a fantasy perspective than anything else.

To do just that, we got an exclusive look at Baseball Prospectus' in-house expert Mike Gianella’s updated Rotisserie-style in-season valuations (which will be released for eyeball consumption very soon). According to Gianella’s calculations, Correa is on pace to earn $20 in AL-only formats this season. If you prorate his at-bats over a full season (year-to-date), he would be on pace to earn an astounding $42. To put that in perspective, Paul Goldschmidt is the only hitter in either format (AL- or NL-only) on pace to eclipse $42 this year.

Forecasting Correa to produce elite power and speed (while maintaining a healthy batting average) over a full season, when we have just a 54-game major-league sample to analyze, is a dangerous endeavor. I’m fully aware that we need to exercise caution when evaluating Correa’s monster debut, but it’s hard to overlook just how valuable his dynamic power/speed combination could be going forward at a position utterly devoid of truly elite impact hitters. If he were an outfielder, we likely wouldn't be having this conversation right now.

It would be refreshing to simply take a step back and appreciate how good he is, but the fantasy landscape is constantly changing and doesn’t remain stagnant for very long. It’s time to start looking ahead with Correa. The offseason is still over a month away (two if you count the World Series), but it’s time to start focusing on the biggest question fantasy owners will likely have to answer next year. Just how valuable will Correa be over a full season in 2016?

Last month, Baseball Prospectus resident fantasy overlord (and Joe Kelly #DFS thrill-seeker) Bret Sayre moved Correa into the top overall spot on his updated Top 50 Fantasy Prospects list. He was already a top three overall prospect prior to the season (trailing only Kris Bryant and Byron Buxton) but as Sayre pointed out in his latest rankings, “Correa is easily a top-20 player in dynasty formats right now, and is a borderline top-10 option. This is not a drill. This is a superstar on our hands.”

That was a month ago. Given his prospect pedigree, it’s not a surprise to see Correa rapidly transform into one of the games elite superstars, but the power outburst has been a bit unexpected compared to his minor league statistics. MLB Advanced Media’s Statcast data isn’t perfect, but it’s not completely worthless for evaluation purposes either. One conclusion we can draw from the data (and 29 extra-base hits in just over 50 games) is that Correa ranks among the game's elite power hitters in terms of making hard contact right now.

According to Baseball Savant, Correa has recorded a batted ball exit velocity in excess of 100 mph 46 times since his call up on June 8th. Only Yoenis Cespedes, Nelson Cruz, Jose Abreu, Manny Machado, Robinson Cano, Prince Fielder, and Mike Trout have recorded more over that stretch. The power surge is no mirage. 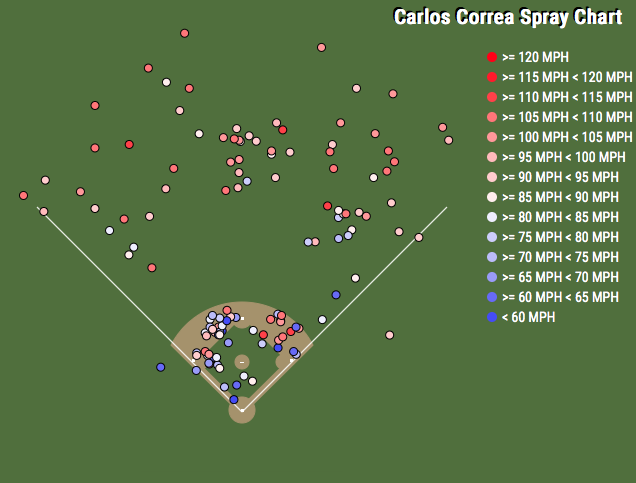 Undoubtedly, the conversation regarding Correa’s value in re-draft formats focuses on his relative risk (ability to repeat a truly stellar rookie campaign) versus the stability and proven track record of Trout and Harper at the top of the draft board. You can even make the case for veteran sluggers like Paul Goldschmidt, Andrew McCutchen, Miguel Cabrera, Josh Donaldson, or pitchers like Clayton Kershaw and Max Scherzer as “safer” options in the first round of 2016 re-draft leagues. However, when you opt for safety and security, historically speaking, you can still get burned. Just take a look at the average draft position (ADP) for the current campaign.

“Based on the 11-year report card of this pre-season effort (ADP), our success rate for correctly identifying the top 15 players has been a dismal 35%,” wrote the great Ron Shandler in a piece entitled “A Critical Analysis of the $30/First Round Player Pool” for Baseball HQ’s 2015 Baseball Forecaster. “Why is our success rate so low? It’s primarily because of each year’s surprise performances (which we can’t control) and the irresistible pull of “recency bias” (which we can).”

Are we falling victim to recency bias, potentially overrating Correa based on two months of otherworldly production? Given all of the evidence at our disposal, that hardly appears to be the case. There is a certain degree of risk associated with every player and if the biggest knock on Correa in re-draft formats is that he hasn’t done it over a full-season yet, then that’s not enough of a reason to seek alternative options.

Correa’s value becomes a much more interesting proposition in dynasty formats. Shortstops who can hit and run like he does simply don’t come along very often. His upside is immense and the scariest thing about his profile long-term is that he might have a higher fantasy floor than almost any other prospect in the game given the weakness of the other options at his position. He doesn’t even have to hit like a superstar to potentially be the top shortstop in fantasy over the next decade.

It’s hard to argue that he’s a better fantasy option statistically than Trout and Harper right now, but the fact that we are even having this discussion speaks volumes about his potential impact going forward and how much his stock has risen as a result of his performance over the past two months.