While Garcia has spent his entire professional career with the Cardinals organization, the soon-to-be 29-year-old has had a very eventful career so far. Once a 22nd-round pick in the 2005 draft, Garcia certainly surprised other teams around the game when he became St. Louis’ top pitching prospect just a few years later. Elbow trouble toward the end of the 2008 season forced the lefty to undergo Tommy John surgery, but he would get back on a minor-league mound by the end of 2009.

In his rookie season in the majors, Garcia made 28 starts, tossing 163 1/3 innings with a 2.70 ERA, which was the fourth-best in the National League. He continued to build his résumé the following year with a solid campaign as he threw 196 2/3 innings with a 3.56 ERA and 156 strikeouts. Garcia signed a club-friendly deal for four years and $27 million that runs through this year, with two additional team options in 2016 and 2017. While the Cardinals would still make this deal knowing what they know now, Garcia would’ve been an absolute steal on that contract had he been able to stay completely healthy. His injury problems in the majors began in 2012 when he missed two months with shoulder soreness. Despite a valiant comeback late in the season where he won four games in September, Garcia hardly had anything left during the playoffs and was pulled after just two innings during the Division Series in an attempt to pitch at less than 100 percent.

The following year, he was lost to shoulder surgery after just 55 innings, and the Cardinals won the National League pennant anyway. Finally, last year, he was shut down after just seven starts before opting for thoracic outlet surgery, which came as something of a surprise to the Cardinals organization, which wasn’t pleased with the lack of communication about his condition.

Garcia has battled injuries throughout his career, but is now healthy for the first time in years. After totaling just 220 2/3 innings over the past three seasons combined, he started the year on the disabled list before making a few rehabilitation starts in the minors and debuted with the Cardinals on May 21st. He’s pitched pretty well in all seven of his starts, but has been particularly hot in June; in five starts and 35 innings, he has a 1.03 ERA, 0.69 WHIP, and 24-to-2 K:BB ratio. So far this season, his ERA, FIP, FIP-, and SIERA are all career bests, but he’s getting the job done in the same way he has for his entire career, as he keeps the ball down with his sinker, mixes in a cutter, and changes speeds with his slow curveball and changeup. 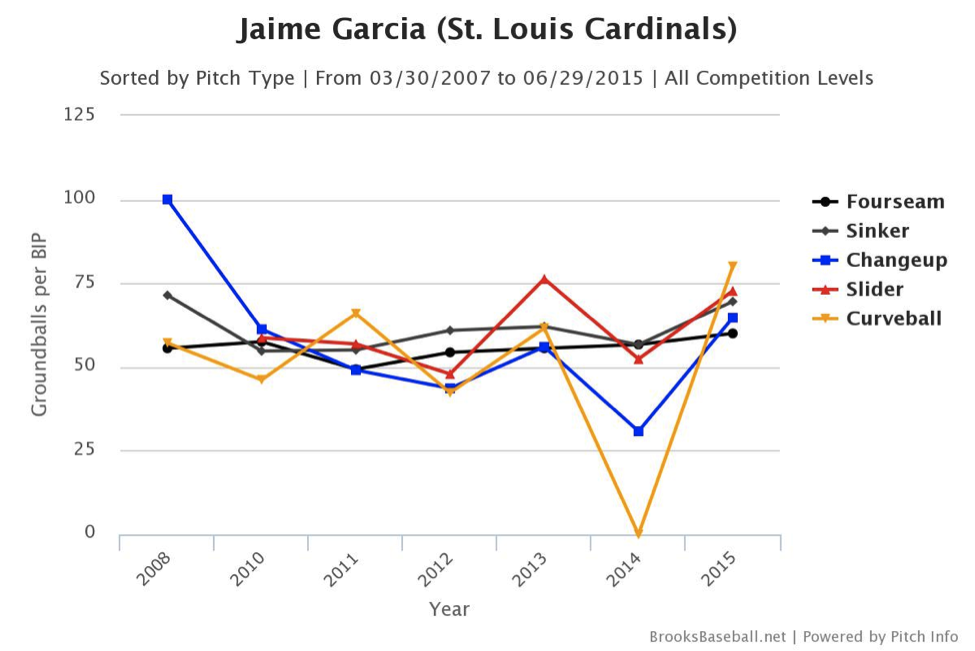 Garcia is also allowing a .237 BABIP, which would be the lowest of his career and is significantly lower than his career mark of .303, which is close to league average. His strand percentage is also helping tilt things in his favor as his 85 percent strand percentage is well above his career 71 percent mark. Despite the great results Garcia has been getting, from these numbers it’s clear that he’s being propped up in areas that aren’t really under his control, and that doesn’t bode well for continued success. Another bad sign is that his swinging-strike percentage is down to seven percent from his career 10 percent clip.

Garcia is still a difficult player to project at this point because he was injured for so much of the last two years. As you can see from his preseason PECOTA projection below, the system assumed not only that he wouldn’t pitch a full season, but that he’d fail to make it through half a season once again. Garcia has already surpassed his projected innings total with 48 so far this season.

Assuming that Garcia is healthy for the rest of this season, he’s very likely to see his 1.69 ERA regress. While I mentioned earlier that his BABIP allowed and strand percentage have made his results better than perhaps he’s pitched, that doesn’t mean Garcia is all of a sudden going to hit the wall or forget how to pitch. Those other factors have certainly helped Garcia to this point, but it’s not an accident that he’s pitching well as he generally always has when he’s been healthy. His FIP sits at 3.01 on the season so far and could be a reasonable expectation for his ERA the rest of the way.

Garcia suffered a cramp in his groin during his most recent start last Wednesday against the Marlins, and the Cardinals gave him a few days to rest while also pushing back his next start, which would’ve come Tuesday. While it’s good news that he was able to complete a side session Sunday without issues, he’s still yet to be officially cleared or named the probable starter for Thursday (as of this writing).

As I mentioned earlier, the Cardinals have two options in Garcia’s contract for the next two seasons. The 2016 option is worth $11.5 million and goes up to $12 million for the following year with a buyout of $500,000 attached to each. The question of his option being picked up for next season likely won’t come down to how he pitches the rest of the way, but rather how healthy he is while doing so.